Political Prisoners Remain Behind Bars as COVID-19 Surges in Iran. This Activist Is Risking Her Life to Get Them Out

It was the acclaimed Iranian human rights lawyer Nasrin Sotoudeh whom activist Shaparak Shajarizadeh credits with saving her life. Detained in February 2018 for taking part in the White Wednesday civil disobedience movement against Iran’s mandatory veiling law, Shajarizadeh was placed in solitary confinement while Iranian authorities denied her access to her lawyer. Released, briefly detained again the next month, and again in May while on holiday with her son, she began a hunger strike, initially refusing water. “Nasrin came to prison and told me if you want to go on a hunger strike, that’s okay, but drink water,” Shajarizadeh tells TIME from Toronto, where she has lived in exile since September 2018.

A veteran of the 40-year-long fight for women’s rights in Iran, Sotoudeh offered more than just reassurance. Her advocacy focussed international attention on the cases of activists detained for protesting Iran’s compulsory hijab law. It was thanks to Sotoudeh’s work as an attorney that Shajarizadeh was released on bail in May 2018. By the time an Iranian court handed down an in absentia prison sentence of 20 years, Shajarizadeh had already left the country with her young son. “Nasrin was a pillar for us women at that time,” Shajarizadeh says. “She would talk to the media about our cases; she made sure the world was watching.”

Two years on, Sotoudeh is the one risking her life in a hunger strike, while Shajarizadeh is trying to make sure the world pays attention. Sotoudeh was arrested in June 2018 on ambiguous charges connected to her work as an attorney, not long after defending Shajarizadeh and other activists. She has since been incarcerated at Tehran’s notorious Evin Prison, joining other activists and intellectuals behind bars.

This is the second time in less than six months that Sotoudeh has gone on a hunger strike to demand the release of Iran’s political detainees during the global pandemic. She has once again “put her life on the line for imprisoned journalists, women’s rights defenders, juveniles, lawyers, religious minorities and environmentalists,” says Canada’s former justice minister Irwin Cotler, Chair of the Raoul Wallenberg Centre for Human Rights (RWCHR) and part of the legal team representing Sotoudeh internationally, “Her courage and commitment are unwavering.”

Iran is currently battling a surge in COVID-19 cases, and while Iranian officials said the country had released around 100,000 prisoners earlier this year, most political prisoners remain behind bars. (The virus can be transmitted easily in prisons and the U.N. has urged governments around the world to free political detainees during the pandemic.) For months, Sotoudeh has called for Iran to release her fellow prisoners of conscience. “Political [activists] have been accused of unbelievable acts: espionage, corruption on earth, undermining national security, prostitution, forming illegal channels on [messaging app] Telegram which can keep them behind bars for up to 10 years or even lead to execution,” Sotoudeh writes in a letter dated Aug. 11, seen by TIME. “From the very start of the judicial process all the way through to sentencing, many suspects are denied independent legal representation or prevented from unrestrained consultation with their lawyers.” She writes that since “all correspondences remain unanswered,” she decided to start a hunger strike on Tuesday.

Iranian women's rights activist Shaparak Shajarizadeh on the sidelines of The Geneva Summit for Human Rights and Democracy, in Geneva on Feb. 18, 2020.
Fabrice Coffrini—AFP/Getty Images

Tehran’s Evin Prison has been Iran’s main facility for the detention of prisoners of conscience since 1972. Months into Sotoudeh’s initial five-year sentence there, authorities convicted her in absentia on seven additional charges including “propaganda against the state,” “appearing at the judiciary without Islamic hijab,” and “encouraging prostitution.” That brought her total sentence to 38 years and added 148 lashes to her sentence. The heaviest of these additional charges was a 12-year term for “promoting immorality and indecency”, Sotoudeh wrote in an opinion piece for TIME on International Women’s Day—Iran’s legal system obliges her to serve it before she is eligible for parole. Amnesty International has called both of the trials at which Sotoudeh was convicted “grossly unfair.”

Her first hunger strike, beginning March 16, started days after Iranian authorities announced they had temporarily released 85,000 prisoners. By the end of April Iran said it had released 100,000 prisoners as part of what a spokesman for the country’s judiciary called “a significant move” to protect prisoners’ health. But political prisoners were mostly left out of the mass furlough and hundreds remained in crowded, unsanitary quarters where social distancing was impossible.

As of Aug. 14, Iran had recorded over 19,000 deaths as a result of the coronavirus pandemic, already the highest figure in the Middle East. But according to a BBC investigation published on Aug. 3 the death toll could be triple that. And although Iranian officials have described their efforts to protect prisoners from the pandemic as “exemplary,” the U.N.’s Office of the High Commissioner for Human Rights continues to raise concerns over Iran’s incarceration of prisoners of conscience, including those reportedly ill with COVID-19 symptoms. Leaked letters obtained by Amnesty International in July show that the Iranian government has ignored repeated pleas from senior Iranian officials responsible for managing the country’s prisons for resources to control the spread of COVID-19 and treat infected prisoners. There are signs the virus is spreading inside Evin: out of 17 inmates prison authorities recently tested in a single ward, 12 tested positive for the virus, the Center for Human Rights in Iran reported on Aug. 11.

Sotoudeh’s initial hunger strike, which lasted six days, was “highly effective”, according to the Canada-based legal team that represents her internationally. “Iranian authorities released prisoners in her ward whom she specifically requested be released, some with health issues or weak immune systems,” says Yonah Diamond, a legal counsel at the Raoul Wallenberg Centre for Human Rights. (TIME could not independently confirm a connection between Sotoudeh’s hunger strike and the release of specific prisoners.)

Still, Sotoudeh’s friends and family worry about her health. Her husband Reza Khandan told TIME in a statement that for the relatives of detained activists “the most difficult days are when a family member goes on hunger strike.” Khandan also highlights the life-threatening risks of declining food, noting that Iran has had “bad experiences with hunger strikes among political prisoners in recent years.” In December 2018, activist Vahid Sayadi Nasiri, who was detained in Qom Prison, died in his cell after a 60-day hunger strike.

Shajarizadeh, the exiled women’s rights activist, can understand the physical and mental distress Sotoudeh is likely now experiencing. Although she says the symptoms vary from person to person, she acutely recalls the agony of her own hunger strikes. The prospect of Sotoudeh undertaking one when her immune system might need to fight a lethal virus fills Shajarizadeh with fear, she says, but she understands why it’s necessary. “Sometimes, the only thing you have [to fight with] is your life.”

Sotoudeh is one of the Iranian women’s rights activists featured in “40 Million,” a short documentary from director Jeff Kaufman for TIME. It can be viewed at the top of this page. 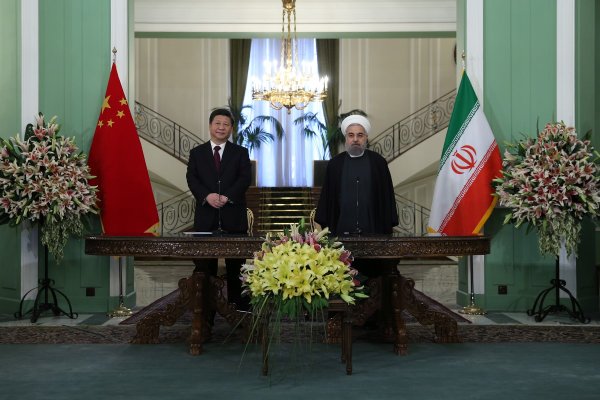 What China's New Deal with Iran Says About Its Ambitions in the Region
Next Up: Editor's Pick