There has been “a shocking explosion of shootings, killings, murders, and heinous crimes of violence,” Trump said at the White House on July 22, referring to Operation Legend, the new Justice Department program to provide federal resources to cities struggling with rising violent crime rates. “This bloodshed must end. This bloodshed will end.”

The solution, Trump says, is for the federal government to “surge” several hundred agents to various American cities from federal agencies including the FBI, U.S. Marshals Service, Bureau of Alcohol, Tobacco and Firearms (ATF), the Drug Enforcement Administration (DEA) and the Department of Homeland Security.

“Our goal is to help save lives,” Barr said at the same event.

But in the month since Operation Legend was launched on July 8 — beginning in Kansas City, Mo., and subsequently expanding to seven other cities — mayors in four of the eight cities on the list say the program’s rollout has been chaotic, hampered by politics and had little impact so far on the ground. “If one were to ask this mayor when this program kicked off if this has been a game changer in a violent year, I think it’s fairly clear the answer’s ‘no’,” says Quinton Lucas, the mayor of Kansas City.

As he seeks re-election as a “law-and-order” candidate, Trump has positioned Operation Legend as a key part of his tough-on-crime stance in the final months of his campaign, regularly noting that the cities seeing an uptick in violent crime are led by Democrats. He has invoked Operation Legend alongside the recent crackdown on protests by federal officers in Portland, Ore., despite the fact that the deployment of federal forces in that city were unrelated to the new program, to paint a broad picture of muscular displays of federal authority.

It’s not unusual for federal agents to be working alongside local police in U.S. cities. DEA agents routinely work on drug trafficking cases, for instance, and ATF agents work on gun cases. But the disconnect between the way the President and Attorney General talk about this new program and what some mayors are seeing on the ground has left them confused and skeptical about whether Operation Legend is designed to help their cities, or to help Trump get re-elected.

“This seems to be at best a confusion and conflation of different federal activities by the President, and it’s resulting in confusion for the public and for mayors,” says Tim Keller, the mayor of Albuquerque, NM. “At worst, it’s just part of his political agenda, which he has stated, which is to basically make progressive Democrat-led cities look violent.”

The operation is named after LeGend Taliferro, a four-year-old boy who was shot and killed in Kansas City at the end of June. Following discussions between U.S. attorneys in those areas and the Department of Justice in Washington, D.C., it expanded to include seven other cities: Chicago, Albuquerque, Cleveland, Detroit, Milwaukee, Memphis and St. Louis. The decision to add each city was signed off on by Barr himself, according to two U.S. attorneys TIME spoke with who have facilitated Operation Legend’s expansion to cities in their districts.

According to Trump, all the cities currently in the program are on board. “We haven’t met with resistance, I have to be honest with you,” Trump said in response to a question from TIME about Operation Legend at an August 3 press briefing. “We’re only looking to help.”

But there has been uneven coordination between the U.S. attorneys and mayors in cities on the DOJ’s list, leaving some leaders uneasy.

Some mayors are satisfied with how the DOJ is working with local enforcement. Chicago Mayor Lori Lightfoot was initially dubious as to how federal forces would help in Chicago, particularly after witnessing federal officers crack down on protesters in Portland. A former federal prosecutor, Lightfoot condemned the paramilitary tactics in Portland and advised the federal agents deploying to Chicago to plug into existing policing infrastructure to help fight the city’s crime wave. There have been 430 recorded homicides in Chicago through July, which represents a 51% increase over the same period last year.

Lightfoot now tells TIME it gives her “confidence” in the program that the Administration is working through U.S. Attorney for the Northern District of Illinois John Lausch, whom she calls a friend. Lausch, for his part, says that bringing federal agents in to work closely with the Chicago Police Department “provides critical help to help us to make sure that we are focusing on the right areas inside the city of Chicago.” Milwaukee Mayor Tom Barrett also says he has been in close coordination with his U.S. attorney and local law enforcement about the integration of federal resources into his city.

Others, however, say the rollout has been confusing, and that’s caused concern among residents. Lucas in Kansas City says he was blindsided by the announcement that the city would be part of the program. He says the U.S. attorney gave him a call a couple days prior mentioning vaguely that there was “a plan afoot,” but that he learned the specifics after seeing the announcement about Operation Legend on Twitter. By the time the program was announced, Kansas City had reached 100 homicides this year, a 40% increase over last year.

In Albuquerque, Keller says he got a “courtesy phone call” less than 24 hours in advance of the DOJ announcement, and that it was unusual how little input or insight he had into the matter. Albuquerque, on pace to break its 2019 record for homicides in the city, was added to the Operation Legend list on July 22, but Keller says so far he has not seen any new federal agents come to the city as part of the program.

That doesn’t mean Albuquerque residents aren’t riled up about it, especially after seeing federal agents discharge pepper spray and shoot rubber bullets at protesters on the streets of Portland. Hundreds of Albuquerque residents have marched to protest Operation Legend’s expansion to their city. Kansas City has also seen protests over the program. “We’ve been having protests about an operation that, to our knowledge, is neither here nor coming here,” Keller says.

In Milwaukee, Barrett has also had to talk to anxious residents in his city about the differences between Operation Legend and what happened in Portland. “The investigators that are coming are not patrol operations. They’re not troops. And when we made that clear, I think that’s what calmed people down,” he says. “This is not what President Trump loved so much. And the more he loved it, the harder it was for us to get the information out.”

The way it was designed to function, Operation Legend would be adding resources to existing structures and joint task forces in American cities, U.S. attorneys and mayors say, not contributing to the apocalyptic vision of militarized streets and rogue federal agents that some Americans fear after Portland and the June scene at Lafayette Square outside the White House. “In all of these cities, the pre-existing framework is there in the form of a federal task force,” says Justin Herdman, U.S. Attorney for the Northern District of Ohio. The new agents assigned to a city under Operation Legend “can plug right in to the work that’s being done,” he says.

That’s what is happening now in Chicago, says Lightfoot. The Operation Legend agents are sliding into “existing infrastructure of FBI, DEA, and ATF that’s already been on the ground here probably 60-plus years, maybe longer,” she says. But, she adds, despite “a lot of rhetoric and hype,” the agents just arrived last week, so “the jury’s out as to whether or not they’re actually going to be helpful.”

Barrett is hoping for the best. Milwaukee had to cut 60 police officers from its budget last year, while homicides are up this year 85%. “We welcome those resources to help our local law enforcement,” he says. But, he adds, Trump’s involvement made implementation of the program in Milwaukee “immensely more complicated,” and he says he’s going to stay vigilant. “I’m going to be watching it,” he says. “I do not want a federal takeover. I do not want what happened in Portland to happen here.”

In Albuquerque, Keller says he has “seen literally nothing other than talk.” And in Kansas City, Lucas is reserving judgment about whether Operation Legend will end up being anything particularly unique at all. “I’m not sure it will be either the game changer that the President was describing, or the beginning of the parade of horribles that you’ve heard it be criticized as on the other side of things,” he says.

That’s why Lucas thinks the President’s messaging about Operation Legend and his muddling of the law enforcement operation with federal agents’ crackdowns on protests in Portland and Washington, D.C. is the ultimate point. “It’s a culture war,” he says. “It’s about cities, and cities being out of control and Trump’s going to have something that helps, whether it helps or not. And we’re pawns in this game.”

—With reporting by W.J. Hennigan/Chicago 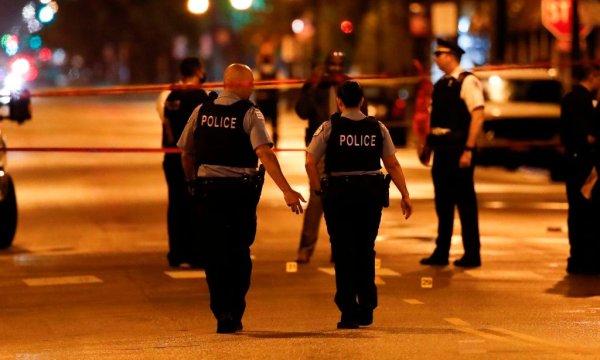 Can Federal Officers Transform A City With 13,000 Police?
Next Up: Editor's Pick