‘It Was a Planned Attack.’ Chicago Mayor Lori Lightfoot Says Looting Was Organized

A day after looters smashed-in retailer’s windows, carried away loads of high-end merchandise and overwhelmed police officers in downtown Chicago, Mayor Lori Lightfoot says the violence was an organized raid and not a demonstration of angry protest.

“When people showed up on Michigan Avenue in the downtown area with U-Haul trucks and cargo vans, and sophisticated equipment used to cut metal, and the methods that were used, and how quickly it got spun up… that wasn’t any spontaneous reaction,” Lightfoot told TIME in her fifth-floor offices at Chicago’s City Hall on Tuesday.

The chaos that unfolded Sunday night, and into the predawn hours Monday, was initially blamed on a police shooting in the city’s southside Englewood neighborhood. News of the incident—along with misinformation that a minor had been shot—pinballed on social media, resulting in “caravans” of cars headed north downtown, Lightfoot says.

“To be sure, there are people that did join in that were motivated by lots of different reasons, and certainly were motivated by social media posts encouraging people to come downtown,” Lightfoot says. “But the core of what happened — that’s organized criminal activity… It was a planned attack.”

For three hours that night, Chicago was under virtual siege. Hundreds of people flooded the streets. Looters broke into buildings and came out with armfuls of jewelry, clothes, electronics and other goods. The 911 switchboard was swamped with 1,800 calls between midnight and 3 a.m., a figure that’s typically in the teens at those hours. Lightfoot says the looters knew that police staffing would be low that early Monday morning and therefore picked “the moments where they feel like they have the best opportunity to make a move.”

The aftermath seen at the store Nordstrom on Aug. 10, 2020, following a night of unrest in Chicago.
RMV/Shutterstock

The city’s Magnificent Mile and other shopping districts were hit with widespread theft, vandalism and destruction. Many of the businesses were big-name retailers like Gucci, Nordstrom and Apple. Some were looted just six weeks earlier amid the violent unrest that erupted after George Floyd, an unarmed black man, died in Minneapolis police custody in May. And all were struggling to deal with the economic impact of the COVID-19 pandemic.

Chicago, like many other U.S. cities, is in the midst of a surge in violent crime. Last month, 573 people were shot in America’s third largest city — at least 58 of them juveniles. There have been 430 recorded homicides through July, which represents a 51% increase over the same period last year. Compare that to New York City, for example, which had just 237 murders, despite having nearly three times the population.

In recent days, the Chicago Police Department has instituted 12-hour shifts and canceled days off for all officers until further notice. On Monday, the department sent 400 officers downtown. Expressway exits were closed and nearly every bridge was raised to seal off the area. By dawn, it was clear Chicago was an American city in distress. Shattered glass carpeted sidewalks. Trash billowed down major streets. Police stood guard in riot gear on corners.

Lightfoot says authorities have yet to identify ringleaders or individuals who she believes strategized the violence. A task force of police detectives, FBI agents and officials with the U.S. Attorney’s office are now busy collecting and analyzing hundreds of hours of security camera footage to identify those involved.

“We’re still going through lots and lots of video tape,” Lightfoot says. “But people were able to fairly quickly take out cash registers, ATM machines, cut through metal grate, and to get beyond and behind security systems that are pretty sophisticated. That’s not your average looter.”

The mayor says she’s instructed police to locate every automobile spotted downtown amid the looting for “being part of a criminal operation.” “Every car that we can trace to a resident of the Chicago, I want that car found and I want it towed,” she says. “We’re not messing around.”

On State Street, in Chicago’s River North downtown neighborhood, Bill LaMacchia, 54, estimated about $20,000 damage on his bar and restaurant, Bijan’s Chicago. Shards of glass that used to be part of his revolving door and window panels crunched under his gym shoes as he walked. A group of looters had heaved a marble-top table through a massive picture window overlooking the outside patio. They took nearly every bottle of liquor from his shelves. Some of them even sat and drank the bottles in his patio seats. The whole scene was captured on his security camera. “It was like a video game,” LaMacchia said. “They did whatever they wanted.”

Ariel Atkins, a Black Lives Matter Chicago organizer, dismissed authorities’ narrative during a rally Monday in support of the more than 100 individuals arrested for various offenses during the looting. Her organization believes Sunday night’s unrest was an organic reaction to the shooting in Englewood, which she pointed out was yet another example of the distrust between police and many Black Americans.

“The Mayor cannot expect people to play by her rules as she refuses to treat them with basic dignity,” a Black Lives Matter Chicago statement said. “These protests can only end when the safety and well-being of our communities is finally prioritized.”

On Sunday afternoon, police in Englewood say they approached Latrell Allen, 20, under suspicion of carrying a gun. Police allege Allen then ran, pulled a gun and shot at officers who returned fire. Allen is now recovering from multiple gunshot wounds. “Police say a lot of things,” Atkins said, pointing to the fact that the police did not have body camera footage of the incident.

To Lightfoot, the police shooting was simply subterfuge for a larger criminal scheme. She warned against conflating the necessary conversations Americans need to have about racial injustice and policing with criminal activity that often harms communities of color.

As the city’s first Black female and openly gay mayor, Lightfoot insists it’s important to lift the voices of organizers, activists and citizens seeking to upend legacies of injustice in Chicago. But the looting this week represented something different to her.

“To see young people who are Black act in the way that they acted, like they had every right to take somebody else’s property — and not just the big guys who have lots of insurance, but the little shop owners in neighborhoods all across the city — they have so little respect for all the sacrifice that people who look like them put into forming a business, all their hurdles, all their challenges that small businesses have,” Lightfoot says. “Particularly small businesses of color, without any regard for not only hurting those business owners but hurting also employees, who also are generally employees of color. That offends me to the core.”

On Jeweler’s Row along Wabash Avenue, in Chicago’s central business district, some small business owners saw their entire livelihood wiped away. Mohammad Ashiq, the 60-year-old owner of Watch Clinic, entered his watch repair shop to discover all of his inventory, some $900,000 worth, had been stolen from his glass showcases. Hundreds of watches for sale and in the process of being fixed for customers were missing. None of it insured. “It is my entire life,” he says as a nearby L-train rumbled above his store. “Forty-two years in this business. I am left with nothing but my health.”

With such a risk hanging over business owners’ heads, many are now reassessing what they should do next. Al Wojtek Macniak, 57 and his daughter, Marta, 35, say they plan to move out their business, M&M Jewelers, out of the ground-floor Jeweler’s Row storefront after looters broke into their building a second time in two months. “We moved here 10 years ago because we wanted the foot-traffic,” Marta says. “But it’s no longer worth it to stay.”

Lightfoot recognizes Chicago is at an inflection point, as violent crime rises and the gulf of suspicion widens between the Black community and her police force. She hopes she can bridge it. “The question is how do we find opportunity out of even these very dark days?” Lightfoot asks. “And what we do to band together because together — it sounds like a cliche — but it is so true, we won’t survive this moment. We will not thrive. We will not move beyond, get stronger, and better if we don’t unite.” 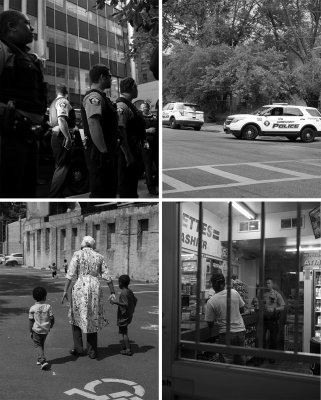 Police Reform: Here's How America Should Rethink Safety
Next Up: Editor's Pick