July was devastating in the U.S. After the country had appeared to flatten the curve in late spring, daily new cases of COVID-19 skyrocketed as the season turned, peaking at 20.5 per 100,000 people on July 18, according to data gathered by Johns Hopkins University (JHU). After some hemming and hawing, many local officials of states seeing resurgences reinstated some of the restrictions, meant to limit the spread of the virus, which had previously been lifted. On the face of it, these decisions seemed to have paid off: Though the U.S. recently passed 5 million total confirmed cases, it took longer (17 days) to go from 4 million to 5 million than it did (15 days) to go from 3 million to 4 million. And in the past two weeks, the per-capita daily case rate in the U.S. has fallen by four—equal to a drop of about 13,100 new daily cases.

The reality, however, might not be so rosy. That’s because in that same time frame, testing for COVID-19 in the U.S. has also fallen at practically the same rate. A little over two weeks ago, about 820,000 new tests were being administered per day, according to the COVID Tracking Project. By Aug. 12, that had dropped to about 710,000:

As U.S. President Donald Trump gears up for the 2020 election cycle, he’s been keen to minimize the impact of COVID-19 under his watch, largely by latching on to any data or talking point that suggests the epidemic has been overblown by those he sees as his political enemies. His favorite: the only reason U.S. case numbers are up is because the country is testing more.

Here’s the thing: if more tests reveal more cases, that, on its own, does not mean a problem doesn’t exist. What would be needed to prove that is a trend showing that as we test more people, the share of positive tests fall. And yet, this has not been the reality at all. In fact, over the past two months, when testing rates increased, so did positive-result rates. And when testing rates fell…so did positive-result rates:

This is a bit complicated, but it’s important, so stay with me here. Most experts who have been watching the pandemic since the start believe that early on, we did not understand the full scale of the spread of the virus—because we were only testing those who got sick. But now we know that many people can contract the virus, show no symptoms whatsoever, then pass it on. When there’s a robust and accessible testing system, even these asymptomatic cases will be found and added to the numbers. But, as soon as testing becomes inaccessible again—which seems to be happening in the U.S. right now—we’re back to where we were before: probably missing cases left and right.

Read more: ‘It’s The Hunger Games for laboratories.’ Why some people are waiting weeks for their COVID-19 test results

As fall approaches, those in charge at every level—from elected federal officials responsible for the lives of millions to parents responsible for the lives of one or two—are going to have to make nearly impossible decisions about how to live in a post-pandemic, pre-vaccine world. Increased testing in the U.S. will be essential if we want these decisions to be even partially informed.

That might mean, as Dr. Ashish K. Jha, director of the Harvard Global Health Institute, has suggested, adding cheaper and more rapid types of testing to the overall mix (even if these types are less accurate than the expensive and tedious kinds). It might mean some use of “pooled testing,” which takes genetic samples from a bunch of people, combines them into a sort of mega-sample, which is what gets sent to testing. And given the Trump Administration’s clear disdain for testing—and resulting abdication of responsibility for maintaining a robust testing system—it might mean governors and mayors really stepping up on this issue, as the leaders of Louisiana, Maryland, Massachusetts, Michigan, Ohio and Virginia (three Democrat and three Republican) did recently when they banded together to buy three million tests.

It’s likely too early to tell for certain whether the U.S. is truly stabilizing, as the surface numbers appear to suggest. But declaring victory now, at a moment when many people can’t get tests or face nearly two-week delays for results is like turning off the lights and claiming you eradicated a cockroach infestation. 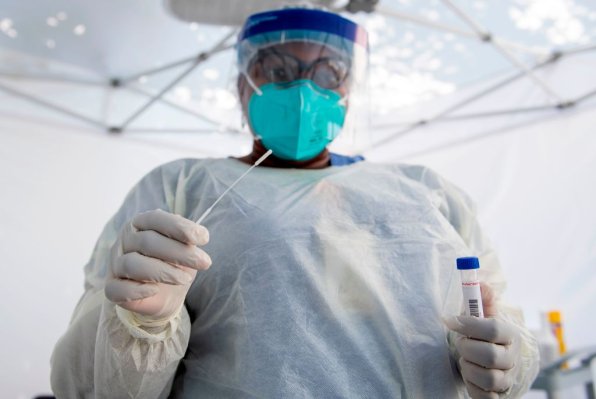 Why Some People Wait Weeks for COVID-19 Test Results
Next Up: Editor's Pick