Rini Sampath didn’t always find it easy to embrace her South Asian roots. “When I was a kid, Indians were still the punchline on cartoon reruns,” says Sampath, 25, speaking from her home in San Diego, Calif. But when she was in middle school, her father introduced her to Kamala Harris, then San Francisco’s District Attorney. Fascinated by Harris’ backstory and biracial identity, Sampath followed the politician’s rise closely—from District Attorney to California Attorney General to U.S. Senator, and now Vice Presidential candidate. “As I watched her grow over the years and break many barriers, I grew up too,” Sampath says. “Inspired by her, I ran for, and won, the position of student body president at the University of Southern California.”

On Tuesday, Harris—born to a Jamaican father and an Indian mother—was announced as presumptive Democratic presidential nominee Joe Biden’s vice-presidential pick, becoming the first Black woman and first person of Asian descent on a major party’s presidential ticket. But amid celebration surrounding the unprecedented level of representation Harris brings to the 2020 race, some worry that her South Asian heritage is being overlooked. Others say they don’t want the conversation around Harris’ candidacy as a biracial woman to ignore her past as a prosecutor, given the impact of the criminal justice system on Black and brown communities.

Despite Harris being open about her Indian heritage, popular framing has often excluded it: In 2016, Harris was frequently referred to as “the second black woman to be elected to the U.S. Senate,” with little mention of the fact that she was also the first Senator of South Asian descent. After the announcement that she would be Biden’s running mate, headlines were similarly over-simplified. “In the media, she is always announced as the ‘first Black woman’ to do something, and she is, but she is also biracial and that is never in the headlines as a one-liner,” says Moenika Chowdhury, 24, of New Jersey.

Some argue that, in today’s political landscape, Harris can represent either Black America or Asian America, but not both. “The Democrats are a party of ethnic hierarchies, in which smaller ethnicities—such as Indians—must efface themselves and wait their turn,” writes Tunku Varadarajan in The Wall Street Journal. As Varadarajan notes, the difference in Black and Asian American numbers in the electorate is stark: 30 million Black Americans are projected to be eligible voters in the 2020 election, compared to 11 million Asian American voters.

But this one-sidedness doesn’t have to be the case, says Neil Makhija, executive director at the Indian American political group IMPACT. Being Black and Indian American places Harris in a position to make “the connection between civil rights and immigration” more visible, says Makhija. “I really am excited for her to tell that story, which will also bridge together communities of color and help us understand how we’re interconnected.”

“It isn’t just that we want her to be an Asian American sister for us,” Rep. Pramila Jayapal told the Associated Press, explaining that Harris embodies “the experiences that so many immigrant communities have had, learning from the leadership of Black communities… So we want her to claim all of us and we will all claim her.”

Harris and her South Asian heritage

The interconnectivity Makhija points to goes back decades. The philosophy of Mahatma Gandhi, leader of the Indian Independence Movement, was at the core of Martin Luther King Jr.’s work amid the U.S. civil rights movement. King, who first learned about Gandhi in 1949 as a seminary student, read many of Gandhi’s writings and corresponded with the Indian leader’s disciples. King soon refined his own message of nonviolent resistance, inspired by the Gandhian principles he had studied. In 1959, the civil rights leader visited India to pay homage and learn more about his paragon. “To other countries I may go as a tourist, but to India I come as a pilgrim,” King said.

Amid waves of social change within America, 1964 saw the passing of the Civil Rights Act. Just a year later, the 1965 Immigration and Nationality Act also became law—a route for many Indians to immigrate to the U.S. The connections between the civil rights movement and immigration are starting to become more apparent among Indian Americans, according to M.R. Rangaswami, founder of Indiaspora. “Everybody is realizing that the Civil Rights Act was the reason why the Immigration Act was then passed a year later,” says Rangaswami, “[and] that allowed Indians and people like my brother to immigrate to this country.”

Kamala Harris with her younger sister, Maya, and their mother outside of their apartment on Milvia Street in Jan. 1970.
Courtesy of Kamala Harris

“My mother and father, they came from opposite sides of the world to arrive in America—one from India and the other from Jamaica—in search of a world-class education,” Harris said on Aug. 12 in her first campaign appearance as Biden’s running mate. “But what brought them together was the civil rights movement of the 1960s. And that’s how they met, as students in the streets of Oakland, marching and shouting for this thing called justice in a struggle that continues today.” Harris often cites her late mother, Shyamala Gopalan Harris, as a particular source of inspiration and drive, and has discussed how her mother was discriminated against for her accent and often sidelined for promotions.

Still, “the primacy of Senator Harris’ identity as a Black woman is a real thing,” says Virinchi Sindhwani, 23, who worked at the Iowa Caucus as a Democratic field organizer. One reason for this overshadowing, according to Varun Nikore, President of the AAPI Victory Fund, could be that Americans just don’t know how to talk about biracial identities. “You don’t see it discussed much,” Nikore says, “but multiracial people are among the fastest-growing demographic categories in the United States.” According to the U.S. Census Bureau, the population of mixed-race individuals is projected to triple by 2060, making it the fastest-growing racial or ethnic group for the next several decades. And the Asian population is the next fastest-growing, projected to double in the same timeframe.

While Asian American voters make up about 5% of eligible U.S. voters, among that group Indian Americans hold one of the highest turnout rates. “But there’s still room to grow, and chances are that Harris’ presence will help boost turnout, especially among younger Indian American voters,” says Karthick Ramakrishnan, a professor of public policy at the University of California, Riverside and founder of AAPI Data.

For some voters, the racial representation Harris brings to the Democratic ticket doesn’t negate concerns they have over her past policy positions when it comes to underrepresented communities, including her record of defending California’s death penalty system and promoting heightened law enforcement surrounding marijuana. “At many points in my life, she’s been a role model for me. However, she has also been very problematic in regards to the prison industrial complex and prosecution,” says Zoee D’Costa, a medical student in New Jersey who identifies as Indian and Portuguese American.

As racial justice protests have swept the country this summer, D’Costa says she is troubled by Biden and Harris’ records dealing with Black communities. Nevertheless, she still plans on voting for a Biden-Harris ticket.

The complexities of biracial identities in politics

In California, where there’s a larger population of Black people than South Asian Americans, Harris “has built her political career sort of centering her Black identity,” says Sangay Mishra, assistant professor at Drew University and author of Desis Divided: The Political Lives of South Asian Americans. He believes this plays a large role in people not knowing about her South Asian heritage today, particularly those who aren’t South Asian. In more recent years, Harris has been more explicit about her Indian roots, a shift Mishra believes is reflective of how she has evolved and grappled with her identity throughout her life. “Her mother was very clear that she was Indian but she was Black also, and her Blackness was a big part of how she was seen by people,” says Mishra, also pointing to Harris’ decision to attend a historically Black college.

Mishra also notes that voters understand that a political figure needs to be popular among more than one ethnic group. “There is a tendency to claim a person as belonging only to one group… but I don’t think that either Black voters or South Asian voters are going to be that narrow in their thinking,” he says.

Kamala Harris meets with supporters in front of the 24th street BART station while on the campaign trail with Cruz Bustamonte on Oct. 4, 2003. Harris was running for District Attorney in San Francisco.
Mike Kepka—San Francisco Chronicle/Getty Images

For multiracial voters, the issue hits close to home. “Being biracial is such a personal experience,” says Chowdhury, who is of Indian and Russian descent. “You cannot judge it from the outside looking in.”

“The wording that needs to stop being thrown around are people debating if she is ‘Black enough’ or ‘Indian enough.’ When you are born biracial you completely own both ‘sides’ of your race. It is not a competition of percentages,” she says. Even more, being biracial is an identity in its own right, separate from the sum of its parts.

The bridging together of the two cultures that many are hoping Harris can represent is already happening in small ways. In the last few weeks, a new dance trend has spread on TikTok and beyond: the Wakhra Dougie. Set to a remix of “Teach Me How to Dougie” by Cali Swag District combined with “Wakhra Swag” by Navv Inder, the choreography blends the Dougie with Indian dance moves. After Harris was announced as Biden’s running mate, the Internet was quick to seize the opportunity—one TikTok creator shared a video dressed as Harris and dancing the Wakhra Dougie with the caption, “Kamala Harris bringing the Black and Indian to the White House in Jan.”

Seeing themselves—and their lived experiences—in a candidate for perhaps the first time, many voters will be hoping for just that. 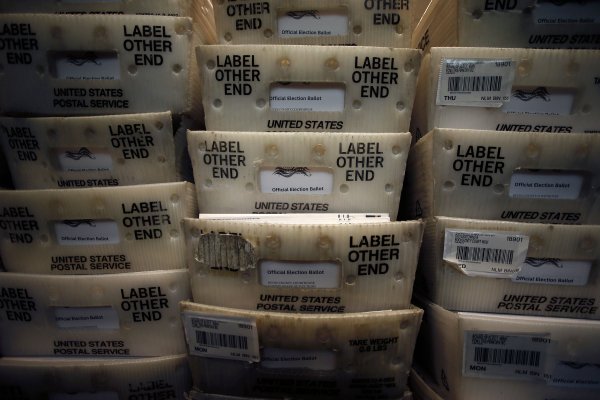 The Primaries Were a Mess. November Can Be Better
Next Up: Editor's Pick