It was sunny and beautiful in Hiroshima on the morning of Aug. 6, 1945, recalls Hideko Tamura Snider: “It was the happiest morning.”

Just a day earlier, Snider and her best friend Miyoshi had convinced their mothers to let them return to the Japanese city from a mountain village where they had gone to avoid potential air raids from Allied forces in World War II. Snider, who was then in sixth grade, was elated to be home when she parted ways with her friend, looking forward to playing together soon. The next day, at 8:15 am, the world’s first deployed atomic bomb was dropped over Hiroshima by the U.S. aircraft Enola Gay, instantly killing an estimated 70,000 people—including Snider’s mother.

“From the outside of the city, I understand a mushroom-shaped cloud developed,” Snider says. “We were inside of the mushroom, where it was pitch dark.”

The Hiroshima death toll would rise to 140,000 by that December due to radiation exposure and other sicknesses and injuries caused by the bomb; survivors suffered ailments for their entire lives. Buildings within a 1.6-mile radius were flattened. Three days later, the U.S. dropped a second, more powerful atomic bomb on the city of Nagasaki. The city’s surrounding hills blocked some of the damage, but the blast, which had winds that reached up to 624 miles per hour and created 7,000°F of heat, would result in 75,000 deaths, only 150 of which were soldiers.

The level of destruction had never before been seen. Now, 75 years later, those days remain a defining moment in the nuclear age. But the number of people who can tell the world what it was like, as Snider does, is shrinking. As of March 2020, there are 136,682 living atomic bomb survivors, also called hibakusha; their average age is over 83; there were roughly three times as many survivors alive in 1981. The question of who will continue to voice their stories is growing more urgent—and in many cases, a new generation has stepped up to carry them forward.

It’s a concern that has been on the minds of many. In 2016, when Barack Obama became the first sitting U.S. President to visit Hiroshima, he focused his message—which was not without controversy—on healing and remembering the past, and noted that such remembering got harder every year. “Some day, the voices of the hibakusha will no longer be with us to bear witness,” he said. “But the memory of the morning of Aug. 6, 1945, must never fade. That memory allows us to fight complacency. It fuels our moral imagination.”

Talking about what happened wasn’t always as clear a part of the hibakusha experience as it is today. In the aftermath of the war, the Civil Censorship Detachment of the Allied occupation forces reviewed civilian communications. News reportage, images and scientific research on the blasts were all censored. In addition, many hibakusha felt pressure to censor themselves, at times feeling shame or facing ostracization from society for being “damaged” from radiation. “During the bomb, after the bomb, and years on end, we didn’t cry,” says Snider, now 86. “The Japanese culture is grit your teeth and hold in all your adversities and endure.”

That began to change slowly over time, as survivors started to seek recognition for what they went through and felt a desire to speak up for those whose lives were lost. Many hibakusha, like Snider, came to feel that they had a mission to share what they lived through, in an attempt to ensure that nothing like what occurred in August 1945 ever happens again. Snider, a retired psychotherapist who now lives in Medford, Ore., published her story in a memoir, One Sunny Day, in 1996, and in 2006 led the Rogue Valley Peace Choir’s Peace Journey to Japan. Snider also published When a Peace Tree Blooms, a children’s book about resilience and choosing peace. (She got some pushback on the idea of a children’s book about her story, she says, but responded that she had lived through it as a young child herself.)

Hideko and her mother before leaving Tokyo, 1938.
Provided by Hideko Tamura

Similarly, Dr. Masao Tomonaga, 77, who was 1.5 miles from Ground Zero in Nagasaki during the explosion, was motivated to enter medicine by seeing the increasing cases of leukemia around him in the years after the bombing. Today, Tomonaga runs a retirement home for older hibakusha and is the honorary director of the Japanese Red Cross Nagasaki Atomic Bomb Hospital. “My house was half crushed, but I luckily survived in the bed and was rescued by my 19-year-old mother,” he says. “We escaped from the broken house with great effort to avoid a rapidly expanding firestorm, which made our district flat within a few hours. I was two years and two months old.”

Tomonaga still cares for 400 elderly hibakusha, but in many cases survivors—even those like Tomonaga and Snider who were children in 1945—are passing the torch to a new generation’s voices for nuclear disarmament.

One member of that new generation is Jared Namba, the grandson of a survivor. “Learning about my grandfather’s experiences in Hiroshima has over time strengthened my sense of self and responsibility as a Japanese American,” says Namba, who co-created the short film An American Hibakusha, seen above. “Not many hibakusha remain,” says Namba, “but while people like my grandfather are still alive, it’s important for us to preserve, see and hear their stories.”

Namba, who co-directed the film with Sazzy Gourley, hopes that viewers are left with a desire to learn more about the human cost of war, and to question the role of the atomic bomb in 20th century history. In the U.S., the long-dominant version of that story was that the atomic bomb ended the war, and it was therefore a “necessary evil,” says historian Tsuyoshi Hasegawa, who has taught at the University of California, Santa Barbara. Hasegawa’s research, however, suggests that the entry of the Soviet Union into the conflict, not the bomb, may have been the factor that pushed Japan to surrender. (He also argues that a view that focuses solely on Japanese victimization is not all-encompassing either, because of the greater context of Japanese aggression in the ongoing war.)

For a while, that prevailing American view was the one familiar to Ari Beser, the grandson of the only U.S. serviceman aboard both B-29s that dropped the atomic bombs on Hiroshima and Nagasaki.

Beser recalls that, while he was in elementary school, students were given an assignment to ask their grandparents what they did in World War II. Beser told the teacher that none of his grandparents who were in the war are living so he couldn’t ask them, to which the teacher responded, “Well, everyone knows what your grandfather did, Ari… He was part of the mission that ended the war.”

But as Beser grew older, he felt compelled to understand the survivors’ perspective. Today, he is an advocate for nuclear disarmament and hopes for people telling the story of the war’s end to focus on the stories of the hibakusha. “It was 75 years ago for us, but it’s every single day for the people who survived,” says Beser. “I want people to take away what happens to humanity when those bombs are dropped.”

Not every younger person working to tell those stories is a direct descendant of someone involved. To help ensure the stories of the hibakusha never disappear from public memory, the City of Hiroshima and the Hiroshima Peace Memorial Museum operate what is known as the denshosha project. Those who volunteer as denshoshas, also called “A-bomb legacy survivors,” go through a three-year training program and are assigned the story of a hibakusha to learn and keep alive even after their passing. A denshosha becomes the official memory keeper for their respective hibakusha.

Inspired by witnessing the other hibakusha “work to realize the world without nuclear weapons, trying to protect future generations from the sufferings they went through…even though they are still suffering with their own health concerns,” Naoko Okimoto, 48, decided to go through the program to become a memory keeper for Mutsuhiko Segoshi, an atomic bomb survivor from Hiroshima. Okimoto’s mother-in-law was exposed to atomic-bomb radiation as a toddler, and Okimoto says the experience of raising a toddler of her own further pushed her to take action.

Every year, new lives join the world, Tomonaga, the hibakusha doctor, says—and he believes it is the will of the hibakusha to share with them the knowledge of the human impact of nuclear weapons.

Each new generation “will become the responsible generation when they become national leaders after a few decades,” he says. “It is our hope they will finally succeed in total nuclear abolition.” 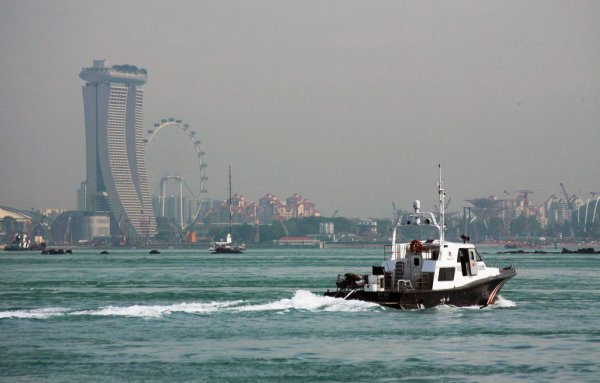 Piracy in Asian Waters Rises to Highest in Five Years: Data
Next Up: Editor's Pick