After the Enola Gay dropped an atomic bomb on Hiroshima, Japan, on Aug. 6, 1945, “a city died, and 70,000 of its inhabitants.” The B-29 bomber stayed airborne, hovering above a terrifying mushroom cloud.

This “dreadful instant,” as TIME once put it, helped speed the end of World War II, launched the atomic age and began an ethical debate over the decision to use nuclear weapons that has continued for more than 70 years — and that has extended to questions about the plane itself.

The Enola Gay is a B-29 Superfortress, which pilot Paul Tibbets named after his mother, and which had been stripped of everything but the necessities, so as to be thousands of pounds lighter than an ordinary plane of that make. In 1945, it was given an important task. “It was just like any other mission: some people are reading books, some are taking naps. When the bomb left the airplane, the plane jumped because you released 10,000 lbs.,” Theodore Van Kirk, the plane’s navigator, later recalled. “Immediately [Tibbets] took the airplane to a 180° turn. We lost 2,000 ft. on the turn and ran away as fast as we could. Then it exploded. All we saw in the airplane was a bright flash. Shortly after that, the first shock wave hit us, and the plane snapped all over.”

The plane returned to Tinian Island, from which it had come. A few days later, on Aug. 9, the U.S. dropped another atomic bomb, this time on Nagasaki. While it did not drop the bomb on Nagasaki, the Enola Gay did take flight to get data on the weather in the lead-up to the second strike on Japan.

After the war, the airplane took flight a few more times. In the aftermath of World War II, the Army Air Forces flew the Enola Gay during an atomic test program in the Pacific; it was then delivered to be stored in an airfield in Arizona before being flown to Illinois and transferred to the Smithsonian in July 1949. But even under the custody of the museum, the Enola Gay remained at an air force base in Texas.

It took its last flight in 1953, arriving on Dec. 2 at Andrews Air Force Base in Maryland. As the Smithsonian recounts, it stayed there until August of 1960, until preservationists grew worried that the decay of the historic artifact would reach a point of no return if it stayed outside much longer. Smithsonian staffers took the plane apart into smaller pieces and moved it inside.

By the time the 50th anniversary of the atomic bombings of Japan approached, the Smithsonian had already spent nearly a decade restoring the plane for exhibition at the Smithsonian Institution’s National Air and Space Museum. But when the nearly 600-page proposal for the exhibit was seen by Air Force veterans, the anniversary started a new round of controversy over the plane, as TIME explained in 1994:

Eventually, the criticism from veterans, Congress and others resulted in major changes to the exhibition. “[The show] will no longer include a long section on the postwar nuclear race that veterans groups and members of Congress had criticized. The critics said that the discussion did not belong in the exhibit and was part of a politically loaded message that the dropping of the atomic bomb on Japan began a dark chapter in human history,” the New York Times reported. That version of the exhibition opened in 1995, displaying more than half of the plane, the restoration of which was still unfinished.

But the exhibition proved popular. When it closed in 1998, about four million people had visited it, according to a report by Air Force Magazine‘s Correll — the most ever to visit an Air and Space Museum special exhibition to that point.

It would take until 2003 for the full plane to be displayed, at the Air and Space Museum’s location in Chantilly, Va. That opening again provoked protest, but it can still be seen there.

And as long as it is on display, the questions it raises are likely to continue — after all, they have been with the Enola Gay since it first became a household name.

Even on board, the men who flew the plane knew as much. Van Kirk, the navigator, later described the crew as having had the immediate thought that, “This war is over.” And copilot Robert A. Lewis kept a personal log of the mission, which — when it was later made public — offered a look at what else they were thinking. “I honestly have the feeling of groping for words to explain this,” he wrote of the moments after the mushroom cloud rose, “or I might say My God what have we done.” 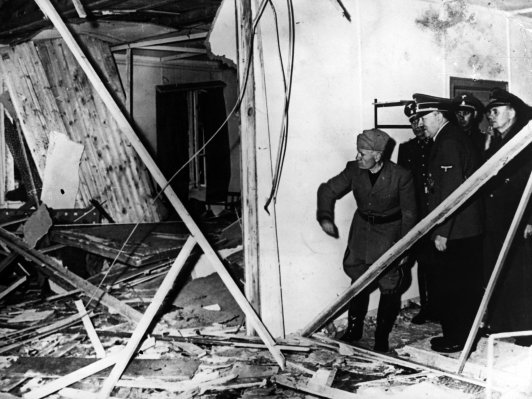 A Group of German Leaders Tried to Kill Hitler in 1944. Here’s Why They Failed
Next Up: Editor's Pick