Even in Wealthy Areas of the U.S., People of Color Are More Likely to Get and Die from Coronavirus, Study Says

COVID-19 has had a disproportionately heavy toll on U.S. communities of color across income levels, according to a new research letter published in JAMA Network Open.

Poverty is one of the clearest consequences of structural racism, and one of the easiest to link to health inequity. You can trace an unbroken line from racist real estate and employment policies to the struggle of many Black and brown families to afford things like fresh food, insurance and quality medical care. These disadvantages always have a direct impact on health—but especially during a pandemic.

The new study, however, shows that structural racism affects health in ways that go beyond poverty. “Income is one feature that’s important,” says senior author Andrea Troxel, director of the division of biostatistics at the New York University Grossman School of Medicine, “but there are so many others.”

Troxel’s paper drew on publicly available data from counties surrounding 10 of the country’s largest urban areas. The researchers first sorted the counties into those with relatively high and low rates of poverty. The median income across high-poverty counties was about $60,000, compared to about $80,000 for low-poverty counties.

Next, the researchers looked at the racial makeup of each county, along with the local incidence of COVID-19 infection and death through May 10. They found that people living in substantially non-white communities were significantly more likely to contract and die from the novel coronavirus, no matter how affluent their community.

Disparity is “very pronounced in counties with higher levels of poverty, but it’s certainly present in the lower-poverty counties as well,” Troxel says. “That was a little bit of a surprise to us.”

Troxel’s team didn’t have access to household-level data, so the paper couldn’t assess granular factors like how much money an individual family made, how many people lived in a specific home or how easily a family could secure medical care. For that reason, she says, it’s impossible to say exactly what’s behind the disparity the research team observed.

But this isn’t the first time research has shown that race-based health disparities persist even in higher-income populations. One 2017 paper looked at the health of people making at least $175,000 per year. Even in this wealthy group, the researchers found that Black Americans experienced worse outcomes than their white peers in six out of 16 categories, including prevalence of diabetes, high blood pressure and physical inactivity. Hispanic Americans were disadvantaged in three categories, including rates of obesity.

“Even among those with high income, blacks and other minorities are unable to escape discriminatory treatment,” the authors of the 2017 study wrote. This could have a direct impact on wellness, since studies have shown that the stress and trauma of discrimination may put people of color at higher risk for physical and mental health issues.

When it comes to COVID-19, the type of job someone holds also matters—probably as much, if not more than, their salary. Someone with a desk job that lends itself to working from home has a much lower chance of exposure than an essential worker who must physically report for duty each day. Data show Black Americans disproportionately hold essential jobs in fields like transportation, health care and child care.

Troxel says she hopes her research, though preliminary, will encourage lawmakers to address health inequity at a policy level, and to examine it with the nuance it deserves.

“It’s not a question of biology or some sort of innate susceptibility [to disease],” she says, “but a question of [how] the racism of structures and the history of our society has developed to the extent that it goes well beyond income.” 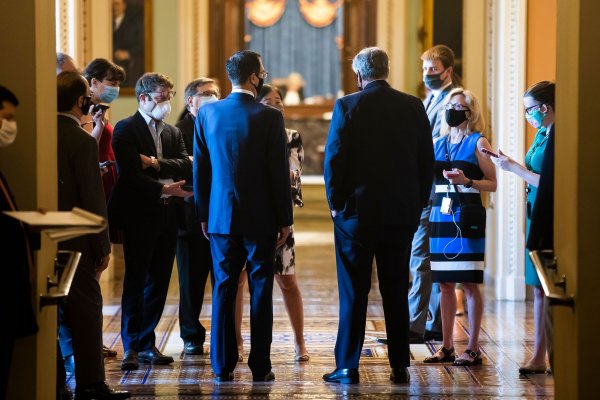 We Need Smarter Stimulus from Washington
Next Up: Editor's Pick