Artur Widak—NurPhoto/Getty Images
Ideas
By Howard K. Koh
Koh is a physician, the former assistant secretary for health in the Obama administration, and professor of the practice of public health leadership at the Harvard T.H. Chan School of Public Health and the Harvard Kennedy School.

George Floyd’s violent and senseless death has justly sparked a national outpouring of outrage. Multiracial waves of protesters have called for an end to racism and racial injustice, particularly for Black Americans. Within the context of a grim pandemic, Floyd’s untimely death also magnifies the urgency to address another critical dimension of racial injustice: health inequity in America.

It’s long past time to end the disproportionate, unjust and unnatural impact of disease on black Americans and other people of color. Diseases—like COVID-19—do not discriminate. Yet they spread more rapidly among those discriminated against. Preliminary data suggest that predominantly Black counties have three times the rate of COVID-19 infections and six times the rate of death than predominantly white counties. Higher rates of conditions such as heart disease, cancer, obesity, diabetes and high blood pressure in communities of color increase their risk for COVID-19 particularly, and overall decrease life expectancy for black men by more than four years compared to whites.

Drivers of health inequity have been amply documented for decades. A constellation of socioeconomic disadvantage—in jobs, housing, and education, for example—weakens community resilience to so many causes of human suffering (including pandemics and violence). Many hospitals and health settings are viewed as inhospitable by people of diverse races and cultures, with even well-intentioned clinicians often unconsciously demonstrating bias that exacerbates distrust.

It doesn’t have to be this way. We can turn shared anger into action through four concrete actions.

First, the U.S. must sustain the highest-quality data systems to track medical outcomes for communities of color, particularly during health crises. Doing so will address the unacceptable lack of timely racial and ethnic COVID-19 data that has delayed or weakened testing, prevention, and outreach efforts on behalf of Black Americans as well as indigenous and immigrant communities. Long overdue CDC directives to require such data for all laboratories conducting COVID-19 testing, recently announced, should help going forward.

Next, we need to reinvigorate efforts to extend health insurance coverage to an estimated 29 million uninsured Americans and provide basic access to care for all. Despite progress under the Affordable Care Act, Black and Hispanic Americans remain 1.5 and 2.5 times more likely, respectively, to be uninsured. Higher uninsured rates for indigenous Americans and some Asian American Native Hawaiian and Pacific Islander subpopulations are also notable.

Expanding Medicaid can support low-income, predominantly minority, populations in the 14 states that have yet to do so. Future waves of Congressional funding, during COVID-19 and beyond, must explicitly target preventable deaths for people of color, monitor outcomes, and account for results.

We also must transform how health professionals care for patients with backgrounds different than their own. Health systems and doctors everywhere should be adopting culturally and linguistically appropriate standards to advance cultural competence and effectively care for people of diverse backgrounds. Community health centers, by definition located in underserved areas, must be strengthened. The health professional workforce should be diversified to look more like the patients being served and overcome inconsistencies in addressing unconscious bias and discrimination.

Finally, it is critical that we revitalize public health departments and workforces, long overlooked and underfunded. As a starting point, short-term COVID-19 contact tracers can become long-term community health workers addressing critical social issues (e.g. suboptimal housing), physical health (e.g. diabetes prevention, smoking cessation), emotional well-being and environmental health. Such workers understand that instead of starting in a doctor’s office, health flows from the community where people live, labor, learn, play, and pray. We must break down walls to build up collaboration between health and other key sectors of society—including housing, education, transportation, faith-based organizations, and yes, criminal justice. Businesses must protect essential workers, especially black Americans and other people of color, who may not have the privilege of working from home during the COVID-19 pandemic.

As a son of an immigrant family and as former Assistant Secretary for Health in the Obama Administration, I had the honor of overseeing both Healthy People 2020 (a time-honored national roadmap of goals updated each decade) as well as the first HHS Action Plan to Reduce Racial and Ethnic Health Disparities. Thousands of organizations and individuals dedicated themselves to these goals which, coupled with the Affordable Care Act, contributed to some progress.

But to honor Mr. Floyd’s legacy, we can do more. Together, we can make a bolder commitment to just health. Ending racial injustice in health can shape the future for all. For as Reverend Martin Luther King once said, “We may have all come on different ships but we’re in the same boat now.” 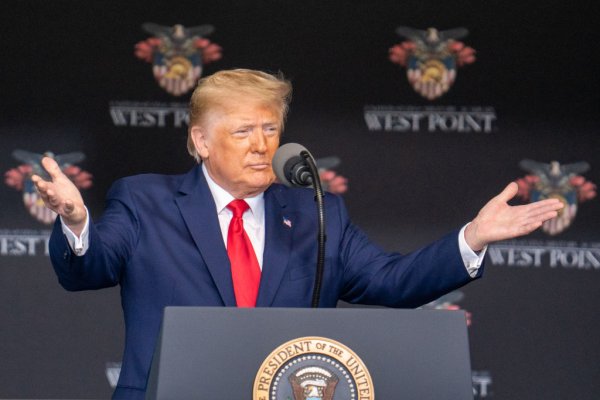 Trump Claims Coronavirus Will ‘Fade Away’ Despite 20,000 Daily Cases
Next Up: Editor's Pick