'I Was Too Fat.' Prime Minister Boris Johnson Says Brits Must Lose Weight to Fight Coronavirus

U.K. Prime Minister Boris Johnson said Monday that he was “way overweight” in April when he was hospitalized with COVID-19, as his government launched a campaign to cut the country’s obesity rates as part of its pandemic response.

Citing research by England’s public health body, a British government policy paper published Monday said there is now “consistent evidence” that people who are overweight have a higher risk of being hospitalized, entering intensive care, or dying after contracting COVID-19 than those in weight ranges considered healthy.

Around two thirds of adults in the U.K. are overweight, and half of that group are in turn considered obese, the paper said. The U.K. has the world’s third-highest death toll from COVID-19 with almost 46,000 virus-related deaths as of Monday.

Read more: The Pandemic Is Turning Americans Against the Gym. That Could Be a Good Thing for the Nation’s Health

“When I went into ICU, when I was very ill, I was very… I was way overweight,” Johnson said in a video posted to his official Twitter account to launch the campaign. “I’m only about 5 foot 10, at the [most], and, you know, I was too fat.” He added that he had started going for daily runs with his dog since recovering from COVID-19 and had lost at least 14 pounds.

The U.K. government said that reducing rates of obesity — which is also linked to heart disease, diabetes, and cancer — would help lessen the strain on the country’s National Health Service (NHS) during the pandemic. If all Brits who are overweight lost 5 and a half pounds, the policy paper found, it would save the NHS $135 million by 2025.

Measures announced Monday include the expansion of NHS “weight management” services, a ban on advertising junk food on TV and online before 9 p.m., possible restrictions on how unhealthy products are presented in grocery stores, and legislation to require large restaurant businesses to display calorie counts on their menus.

Johnson said the campaign would “help people a little bit to bring their weight down –– not in an excessively bossy or nannying way, I hope.”

Commentators in the U.K. have expressed surprise that Johnson had championed a national weight loss campaign. Before becoming prime minister, Johnson published several columns arguing against health-related policies of previous governments on the grounds that they intervened too much in people’s private decisions. While running for the leadership of the Conservative Party in July 2019, he criticized levies on sugary, salty and fatty foods as “sin taxes.” 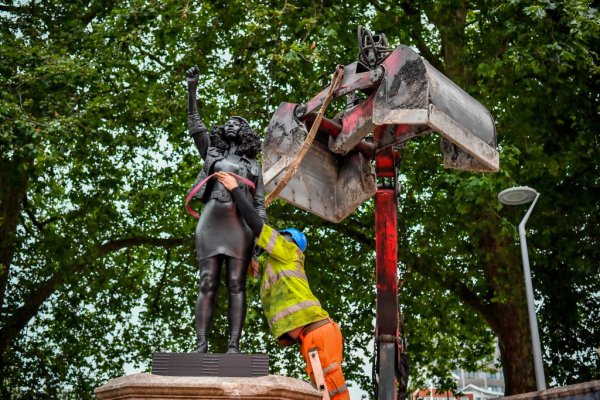 Statue of Black U.K. Protester Removed From Plinth in Bristol
Next Up: Editor's Pick