When It Comes to Homemade Masks, the Number of Layers Matters, Study Says

With medical grade masks still in short supply and badly needed at hospitals and other care centers, many Americans have turned to a variety of other options to help slow the spread of COVID-19, from hand-sewn facial coverings to bandanas and everything in between. But it turns out that when it comes to preventing viral transmission, not all masks are created equal, according to a new study.

In the study, published Thursday in the journal Thorax, researchers pitted three kinds of facial coverings against one another: a single-layer “no sew” mask, a two-layer variety made to specifications from the U.S. Centers for Disease Control and Prevention (CDC), and a three-layer surgical mask. Using LED lights, a high-speed camera and a healthy volunteer willing to have their nose repeatedly ticked with a tissue, each variety of facial covering was tested to see which best contained droplets generated from speaking, coughing and sneezing, with the idea that better containment suggests better efficacy in terms of curbing transmission.

“The COVID-19 pandemic and the need for community face masks has raised questions about whether you can just throw a scarf over your face, or whether you should use a better designed cloth mask,” says Raina MacIntyre, a professor of global biosecurity at the University of New South Wales Sydney, and one of the study’s authors.

The result? The surgical mask did the best job overall, but the two-layer CDC mask was still “significantly better” at containing droplets than the single-layer covering. However, the researchers added, “even a single-layer face covering is better than no face covering.”

The results were somewhat unsurprising. Surgical masks are made of multi-layered polypropylene with a water-resistant outer layer, and they’re regulated based on their ability to catch droplets, MacIntyre explains. And the researchers knew from prior studies that cloth masks with more layers generally perform better. “In truth you probably need at least 3 layers,” says MacIntyre. Other factors, like the material, design, fit, and how frequently a mask is washed, also make a difference.

Still other studies have the need for facial coverings abundantly clear. Research published in June found that mask mandates in U.S. states were associated with faster declines in daily COVID-19 case growth, estimating that mask rules prevented up to 450,000 cases through late May. A different study, also published in June, predicted that the U.S. could avoid more than 30,000 coronavirus-related deaths though October if at least 95% of people wear masks in public, while another study found that mask wearing could reduce transmission risk from about 17% to roughly 3%.

Of course, the comparative efficacy of various types of facial coverings doesn’t matter if people aren’t covering their faces to begin with. While some cities and states have issued mandatory mask rules, many have not, and the Trump Administration has been reluctant to issue a national mandate. The issue has been politicized across the U.S., perhaps best illustrated by Georgia governor Brian Kemp’s July 16 lawsuit challenging Atlanta’s mask rules and other restrictions despite a worsening outbreak across the state.

Still, most registered U.S. voters now support statewide mask mandates, according to a Politico poll released Wednesday. For those committed to wearing face coverings in order to help keep themselves and others safe, it’s important to know that just tucking your face into your t-shirt might not cut it.

“The main message is that the design of your cloth mask matters—more layers is better than just one layer,” says MacIntyre. She recommends making masks with a water-resistant fabric, like polyester, for an outer layer, as well as having at least three layers and ensuring a good facial fit. “Most importantly,” she adds, “always use a clean mask and wash your used mask daily.” 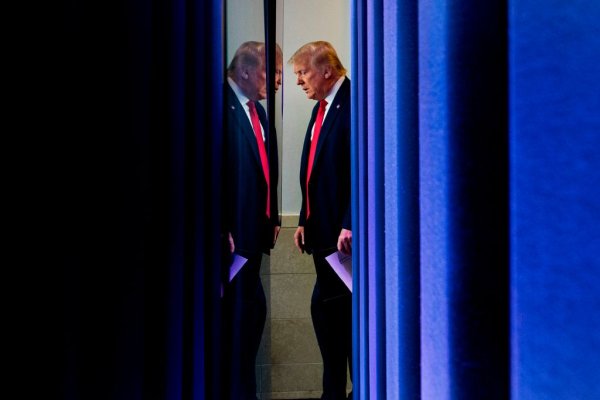 The U.S. Now Has 4 Million COVID-19 Cases, With No End in Sight
Next Up: Editor's Pick