Georgia Gov. Brian Kemp filed a lawsuit on Thursday challenging restrictions implemented by Atlanta Mayor Keisha Lance Bottoms, including her ordinance mandating residents wear masks, to help stem the spread of COVID-19. It is the latest step in a growing clash between the governor and local municipalities over who has authority over how the state handles the ongoing pandemic.

The lawsuit — filed by Kemp against both Bottoms and the Atlanta City Council — challenges Bottoms’ ability to instruct the city’s population to wear face masks. Given the unique situation of the COVID-19 pandemic, experts expressed differing views on whether or not the suit is likely to succeed.

The day before, on Wednesday, Kemp passed an executive order banning municipalities from issuing ordinances requiring people wear masks. The suit argues that local state municipalities do not have the legal authority to issue orders that are more or less restrictive than those issued by the governor.

“As the Mayor of the City of Atlanta, Mayor Bottoms does not have the legal authority to modify, change or ignore Governor Kemp’s executive orders,” the suit states. It also challenges Bottoms’ July 10 decision to roll Atlanta back from “Phase 2” of reopening to “Phase 1,” asking residents to stay home except for essential trips and requiring restaurants and businesses only serve to-go and curbside meals.

Several other cities in Georgia have issued mask ordinances similar to Bottoms’, including Savannah and Athens, but Kemp’s suit only addresses Atlanta. Similar tension between state and local governments has arisen elsewhere in the U.S., such as in New York, where Gov. Andrew Cuomo and New York City Mayor Bill De Blasio have publicly sparred over reopening measures.

On July 10, Bottoms said in a statement that she rolled back reopening measures “[b]ased upon the surge of COVID-19 cases and other data trends, adding that “Georgia reopened in a reckless manner and the people of our city and state are suffering the consequences.”

Georgia was one of the first states to reopen parts of its economy at the end of April and it has seen a dramatic increase in COVID-19 cases over the past few weeks. On Thursday, Georgia was included in a list of “red zone” states compiled by the White House Coronavirus Task Force, meaning Georgia has more than 100 new cases per 100,000 people last week, according to the Atlanta Journal Constitution. On Friday, Georgia reported 3,908 new cases of the virus and 28 confirmed deaths, according to the state’s department of health. As of Friday afternoon ET, Georgia had at least 135,192 confirmed cases in total, according to a tracker from Johns Hopkins University.

Since April 3, the U.S. Centers for Disease Control and Prevention (CDC) has recommended people wear face coverings in public to help stem the spread of COVID-19. On Tuesday, the CDC also said in a press release that the latest science “affirms cloth face coverings are a critical tool in the fight against COVID-19 that could reduce the spread of the disease.”

Kemp has said he supports people wearing face masks and has encouraged Georgians to do so. On Thursday, Georgia’s Attorney General Chris Carr tweeted, “The State of Georgia continues to urge citizens to wear masks. This lawsuit is about the rule of law.” Kemp also tweeted on Thursday his suit is “on behalf of the Atlanta business owners and their hardworking employees who are struggling to survive during these difficult times.”

For her part, Bottoms tweeted on Thursday in response to the suit, “3,104 Georgians have died and I and my family are amongst the 106k who have tested positive for COVID-19. Meanwhile, I have been sued by @GovKemp for a mask mandate. A better use of tax payer money would be to expand testing and contact tracing.” Bottoms tweeted on July 8 that it took her family eight days to receive their COVID-19 results.

During a press conference on Thursday, Bottoms also said, “I am not afraid of the city being sued and I’ll put our policies up against anyone’s any day of the week.” Neither Bottoms nor Kemp immediately responded to TIME’s request for comment on the suit.

Does Gov. Kemp’s lawsuit have a chance of winning?

A number of legal experts TIME spoke with were split over whether Kemp’s lawsuit has a chance of striking down Atlanta’s mask mandate.

Cathy Cox, the dean of Mercer University School of Law, says she believes Kemp could win because of the structure of local government in Georgia. Municipalities have broad emergency powers under Georgia law, Cox explains, but that same law says that cities cannot use their powers to do anything that is “inconsistent” with an order issued by the governor. “Cities don’t have a lot of wiggle room to do things beyond what the legislature says they can do,” she says.

Michael Mears, an associate professor of law at Atlanta’s John Marshall Law School, echoed this point, telling TIME that “there’s a number of cases in Georgia going back to the 1930s that give the authority to the governor.”

State and local governments have sparred over questions of authority numerous times in the past, Clark Cunningham, a professor of law at Georgia State University College of Law, explains to TIME, and state governments typically win. However, Cunningham explains that Kemp’s order is built upon his emergency powers, which give him authority to “take action to protect the health, safety, and welfare of Georgia’s residents and visitors to ensure COVID-19 remains controlled throughout this State.”

Kemp’s suit is unique, Cunningham says, because Bottoms could feasibly argue that the order preventing her from mandating face masks is contrary to Kemp’s declaration of a public health emergency. Therefore, in Cunningham’s opinion, to win, Kemp should have to argue that “preventing the mayor from requiring the wearing of masks ensures that COVID-19 remains controlled.” If the court agrees with this principle, Kemp may well lose the case, Cunningham says.

The governor’s suit also goes beyond just Bottoms’ face mask ordinance. Polly Price, a professor of law and global health at Emory University, tells TIME that “the suit seeks an injunction from the court to prevent the mayor from issuing any more orders related to social distancing measures.” In addition, it asks that the mayor and city council be required to state that whatever orders they have or may issue with respect to the pandemic are unenforceable, Price explains. Price says she’s not sure Kemp will win because the court might not buy his argument for an injunction, which a court only issues if there’s a threat of “irreparable harm.”

Kemp’s suit also asks the court to place a gag order on Bottoms that would prevent her from telling the press that “she has the authority to impose more or less restrictive measures that are ordered by Gov. Kemp related to the Public Health Emergency.” A judge might be hesitant to place such a gag order because it could violate the First Amendment’s guarantee of freedom of speech, Cunningham says.

If Kemp were to win, the ruling would presumably prevent other municipalities in the state from enforcing their own face mask ordinances, Price says. But Mears says the case will also likely be appealed to the state Supreme Court. Don’t be surprised if this challenge is just the beginning of a longer legal battle. 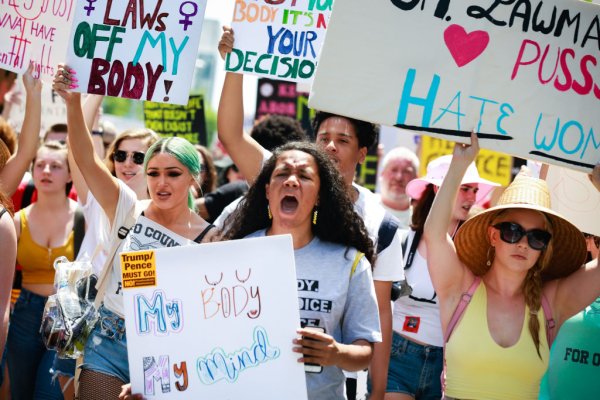