On Saturday, the Oklahoma State Department of Health (OSDH) reported 687 new COVID-19 cases had been confirmed in the last 24 hours. It was the second highest increase only coming after Tuesday’s 858 confirmed cases, per the Oklahoman. As of Saturday afternoon ET, Oklahoma had at least 19,779 confirmed cases of the virus, according to OSDH.

According to a reporter for local news channel KOCO 5, the seven-day average of COVID-19 cases is nearly six times what it was in early April. Officials also reported five new COVID-19 related deaths on Saturday. There have been at least 421 confirmed deaths in total from the virus in the state, according to OSDH.

The surge of new cases comes just weeks after President Trump held a campaign rally in an indoor arena in Tulsa, where many of the attendees reportedly did not wear masks. The event was criticized as being unsafe and a local newspaper ran an editorial asking the President not to hold the rally. On the day of the event, it was revealed that six staffers on the Trump campaign tested positive for the coronavirus.

In the following weeks Tulsa County has seen a sharp increase in the number of COVID-19 cases in the area. As of Saturday afternoon ET, the county has at least 5,005 confirmed cases, according to the Tulsa Health Department.

On Wednesday, Dr. Bruce Dart, the director of the Tulsa Health Department, said the President’s rally and subsequent protests “likely contributed” to the rise in COVID-19 cases in the county, per the Associated Press.

“In the past few days, we’ve seen almost 500 new cases, and we had several large events just over two weeks ago, so I guess we just connect the dots,” Dart said on Wednesday, according to the AP.

The Trump campaign did not immediately respond to TIME’s request for comment. But Trump campaign spokesman Tim Murtaugh told the AP that the campaign took numerous steps to keep the rally’s attendees safe.

“There were literally no health precautions to speak of as thousands looted, rioted and protested in the streets and the media reported that it did not lead to a rise in coronavirus cases,” Murtaugh said in a statement to the AP on Wednesday. “Meanwhile, the President’s rally was 18 days ago, all attendees had their temperature checked, everyone was provided a mask and there was plenty of hand sanitizer available for all…It’s obvious that the media’s concern about large gatherings begins and ends with Trump rallies.”

A week after the rally, the Washington Post reported that the Trump campaign had removed thousands of stickers within the arena placed to promote social distancing during the event.

New York, New Jersey and Connecticut announced on Tuesday that all visitors coming from Oklahoma must quarantine for 14 days. 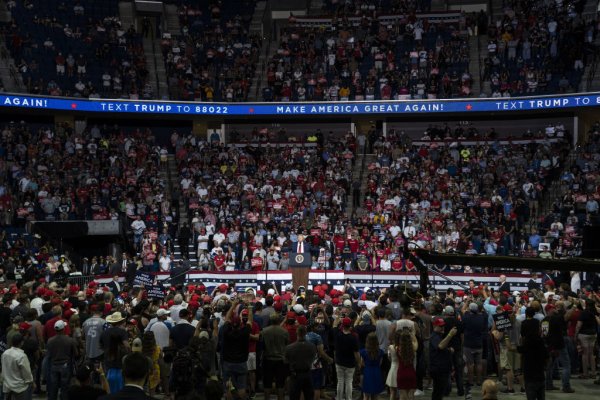