President Donald Trump opened his first rally in more than three months by saying it was a new beginning for his 2020 re-election campaign. “We begin,” Trump said at the outset of his rally in Tulsa, Oklahoma. “We begin our campaign.”

Technically, Trump launched his re-election bid a year ago, but Trump needed the rally in Tulsa to be symbolic reset for his floundering campaign. Trump is trailing presumptive Democratic nominee Joe Biden by a nationwide average of nearly 9 points, according to Real Clear Politics, and losing to the former Vice President in nearly every swing state. The last time Trump held a rally was in March, before the coronavirus outbreak had shut down most of the country; now, more than 120,000 Americans have died from the virus and more than 40 million are out of a job due to its economic impact.

The country has been roiled by unrest as it reckons with systemic racism in the wake of George Floyd’s death, with Trump’s response only deepening the racial divide and provoking further protest. This week, Trump lost a court bid to block former national security advisor John Bolton from releasing a book this week that contains several shocking allegations about the president’s dealings with law enforcement and foreign leaders. Now he is facing questions over the firing a Manhattan U.S. attorney who oversaw investigations into two of Trump’s personal lawyers.

Trump rally attendees wait for the President to arrive at the BOK Center in Tulsa, Oklahoma on June 20, 2020.
Peter van Agtmael—Magnum Photos for TIME

The event failed to deliver the optics of a resounding comeback, and Trump’s 1 hour and 41 minute stump speech spent little time comforting worried Americans or laying out detailed plans for Trump’s second term. Trump’s campaign had bragged days before that more than a million tickets had been sold for the rally at Tulsa’s Bank of Oklahoma Center, but the arena was far from full, swaths of empty blue seats facing the President as he spoke. The BOK Center has a capacity of just over 19,000, but there was ample empty space visible on the floor and in the upper levels of the arena. The campaign had planned to have a separate overflow area at a stage outside, but they abruptly canceled the outdoor portion amid lower than expected turnout.

“Sadly, protestors interfered with supporters, even blocking access to the metal detectors, which prevented people from entering the rally,” Trump campaign spokesman Tim Murtaugh said in a statement. Oklahoma National Guard soldiers were stationed to provide security outside the rally, although the protests appeared to be largely peaceful.

Nevertheless, Trump appeared to enjoy being back in front of a crowd, telling lengthy stories and blaming familiar foes for his problems: the media, “the radical left” and Democrats like New York Rep. Alexandria Ocasio-Cortez and Minnesota Rep. Ilhan Omar. “These people are stone cold crazy,” Trump said about the movement to defund the police, telling a hypothetical tale about a “bad hombre” climbing in a woman’s window at night while her husband is off being a traveling salesman, and 911 no longer being in service when she tries to call for help. He did not address Floyd’s death directly or offer concrete solutions on police reform.

He was dark in his warning over what would happen if Biden wins in November: “In Joe Biden’s America, rioters, looters, and criminal aliens have more rights than law abiding citizens,” Trump said. If Biden wins, “An emboldened left will launch a full-scale assault on American life,” he continued. “They’ll expel anyone who disagrees with them.”

The President regularly returned to the topic of the coronavirus during his speech, at one point referring to it as “the Chinese virus” and another as the racist moniker the “kung flu.” Trump stuck to the line that he has done a “phenomenal job” with the coronavirus and mocked his own Administration’s emphasis on ramping up testing, saying that testing is a “double-edged sword” because, he claimed, more testing means uncovering more cases. “I said to my people, ‘Slow the testing down, please,'” Trump said, indicating that he had personally requested that fewer Americans be tested for the deadly virus during the global pandemic. When asked about that line in the speech, Murtaugh told TIME the President was “making a joke.”

A top Tulsa health official publicly appealed to the Trump campaign to postpone the rally earlier this week, due to concerns it could cause a spike in cases. The Trump campaign handed out masks at the Tulsa rally but did not mandate their use, and most attendees at the indoor event did not appear to be wearing them, even though six Trump campaign staffers who were helping organize the Tulsa rally tested positive for COVID-19, which the campaign revealed the day of the event.

National Guard and vendors selling Trump memorabilia near an entrance to the Trump rally at the BOK Center in Tulsa, Okla., on June 20, 2020.
Peter van Agtmael—Magnum Photos for TIME

Trump, 74, dismissed concerns over his own health that were raised after he appeared to struggle to lift a glass of water to his lips and walked gingerly down a ramp at the U.S. Military Academy at West Point last week. He spent more than 10 minutes talking about the incident, reenacting the ramp walk and blaming slippery shoes for his careful steps, and then lifting a glass of water to his lips onstage in Tulsa to prove he could do it with one hand, before throwing it on the ground, to which the crowd cheered. “There’s something wrong with Biden, that I can tell you,” he said.

Throughout the speech, Trump made veiled attacks on Biden’s mental capacity, saying Biden, 77, often forgets what state he’s in and that he’s not in control of his own campaign. “Joe Biden is a helpless puppet of the radical left,” Trump said. “He’s not radical left. I don’t think he knows what he is anymore.” Trump said Biden is soft on immigration enforcement and on China, and criticized him for voting for the Iraq War and supporting The North American Free Trade Agreement (NAFTA) and the Trans-Pacific Partnership (TPP). “Biden is always on the wrong side of history,” Trump said. “He never made a correct foreign policy decision.”

Trump touted highlights from his first term as president, including stocking the federal bench with conservative judges, passing tax cuts, making trade deals and working to lower the price of prescription drugs.

It wasn’t until the final minutes of the speech that he advanced any specific policy goals or overarching vision for what he would do with a second term in office. Appearing to read his list of priorities from his prepared remarks, Trump promised to protect Medicare and social security for seniors, appoint more conservative judges, finish building the border wall, work with Republicans in Congress on immigration reform, and become the first country to land on Mars. 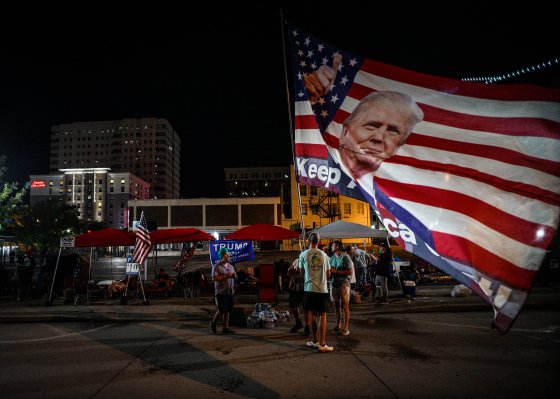 Trump's Tulsa Rally Highlights His Record of Racial Division
Next Up: Editor's Pick