War movies nearly always automatically get filed under “Stuff Your Dad Likes,” whether your own personal dad has any feelings about them or not. But don’t let that stop you from seeing Greyhound, starring—and written by—Tom Hanks, as a World War II naval officer who’s just been given command of his first Fletcher-class destroyer. Don’t know what a Fletcher-class destroyer is? Don’t worry—Greyhound, out now on Apple TV+, is perfectly enjoyable even if you don’t catch every nuance of the lingo. A war adventure set on the bleak, pearl-gray seas of the Atlantic, it’s tense and quietly thrilling, though it’s brushed with somber elegance, too. There’s an abstract, poetic quality to Greyhound; it’s less about rah-rah heroics than it is about the secret burden of heroism—because with wartime heroism, there’s always a price to pay.

Who better than Hanks to show the weight of that burden? He plays Captain Ernest Krause, a career navy officer embarking on his first wartime mission: His vessel, Greyhound, is part of an escort force accompanying a fleet of ships through what, during World War II, was the most dangerous part of the Atlantic, the stretch known as “the Black Pit.” Krause and his ships would have no air cover during this part of the crossing, leaving them vulnerable for several days to attack by German U-boats. And it’s not long before they encounter one: A predatory monster of the deep emblazoned with a bloodthirsty, red-eyed wolf. At one point the enemy hijacks Greyhound’s radio signal and taunts Krause’s crew with demoralizing propaganda: “We watch your ships sink into the deep. We hear the screams of your comrades as they die,” croons the menacing, disembodied, German voice. Before Krause can get the PA system turned off, he glares at the radio speaker, as if to stare down the spooky taunt flowing from it: “The Grey Wolf is so very hungry.”

Krause’s worries mount. His ship runs through its supply of depth chargers long before it’s out of dangerous waters, and its radar and sonar aren’t always reliable. Meanwhile, the Grey Wolf threatens every ship in the convoy, and Krause fears for his men. They look to him for guidance, a sea of faces as smooth as the ocean around them is rough. Though Greyhound doesn’t give you a sense of these men as individuals, you can’t help feeling for them: Collectively, they’re the face of youth, a symbol of the just-barely-started lives any country puts on the line when it goes to war.

That’s part of the weight Krause carries: He’s been around for a while, but it’s the first time he’s been responsible for so many souls. Hanks is so good at playing super-conscientious men that he could probably do it in his sleep, but I find, these days, at least, that I don’t tire of watching him. With Hanks, one squint is worth a thousand words, and in Greyhound he has a vast wealth of squints at his disposal: Some indicate moderate anxiety; others suggest a specific kind of heartache he might never get over. Collectively, they mark Krause as intricately human. He’s a man who prays, and not just when he’s scared. And there’s a woman waiting for him back home (Elisabeth Shue, in a role that is sadly tiny), someone he longs to get back to. Greyhound is in some ways conventional, though always affectionately so. Hanks adapted the script from C.S. Forester’s 1955 novel The Good Shepherd, and the script’s rapid-fire dialogue—a relay of orders being passed from one man to another, the embarrassment of a sailor who swears in front of the captain and then races to apologize—feeds into its current of scrappy energy.

Greyhound is gorgeous to look, evocative in all its seafaring desolation: The sight of a German torpedo barreling toward Krause’s ship, visible only as a streak of white plowing through the dusky water, has a shivery beauty. (The cinematographer is Shelly Johnson. The director, Aaron Schneider, has worked mostly as a cinematographer on television projects, and has directed one previous film, the 2009 Get Low, with Robert Duvall and Sissy Spacek.) And Hanks and Schneider take care with the movie’s emotional details. Rob Morgan—a terrific actor seen recently in The Photograph and Just Mercy and, before that, in Mudbound) plays Cleveland, the mess mate in charge of preparing Krause’s meals. The role is small, but it’s potent, an acknowledgment of how even the smallest wartime responsibility can have significance beyond measure. Krause accepts his meals gratefully, but doesn’t eat them, and that worries Cleveland: He knows it’s his job to keep the captain fed, but his concern goes beyond duty; there’s a sense of protectiveness there too, the knowledge that a human being with a tough job needs sustenance. Cleveland and Krause appear, at first, to have only polite and superficial interaction with one another. But a jagged turn in the story reveals that Krause understands exactly all that Cleveland has done for him—the moment we recognize that is stirring and subtle. Watch Greyhound with a dad you love, or in memory of a dad you love. And know that there’s no shame in having dad taste. 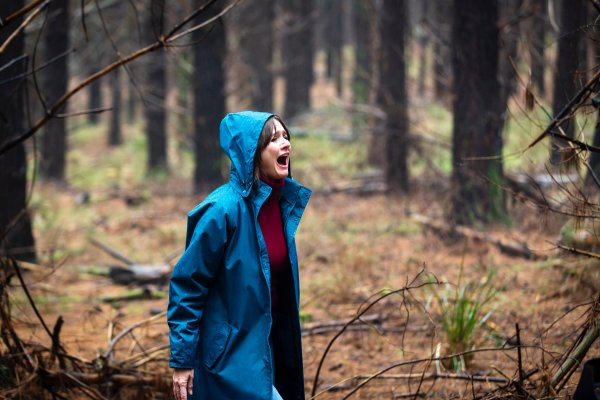 Relic Mines the Horror of Watching Our Parents Age
Next Up: Editor's Pick