Intelligence Agencies Don’t Agree Whether Russia Paid the Taliban to Target U.S. Soldiers. That Doesn’t Mean Trump Wouldn’t Have Known About it

U.S. and allied military and intelligence officials in Afghanistan collected information indicating that Russian intelligence officers maintained a fund for rewarding Afghan militants who killed American and Afghans soldiers, but senior officials are divided on how much credence to give the raw intelligence.

CIA and Special Operations Command officers in Afghanistan (SOCOM) concluded based on information from human sources that the Russians were, as one official who spoke on condition of anonymity put it, “incentivizing” Taliban fighters to kill Americans and Afghans to retaliate against America for Russia’s defeat in 1989 and disrupt the U.S.-sponsored peace negotiations between the Taliban and the Afghan government. The National Security Agency, however, expressed less confidence than the CIA or SOCOM because there was no convincing evidence of that in intercepted Taliban and Russian communications.

“Folks downrange are convinced,” said one official familiar with the matter, referring to U.S. personnel in the Afghanistan region. “But some (intelligence) analysts have expressed doubts.”

The Trump Administration has seized on these divisions over the alleged Russian bounty system since the scheme was first reported by The New York Times on June 26. President Donald Trump tweeted two days later that intelligence officials told him they did not consider the intelligence credible, so it was not reported to him, Vice President Mike Pence, or other top officials. White House press secretary Kayleigh McEnany emphasized the dispute on June 29 to reporters, saying disagreements remain over the alleged Russian bounty campaign.

“There is no consensus within the intelligence community on these allegations, and, in effect, there are dissenting opinions from some in the intelligence community with regards to the veracity of what’s being reported. And the veracity of the underlying allegations continue to be evaluated,” McEnany said. “Intelligence is verified before it reaches the President of the United States. And in this case, it was not verified.”

However, despite the differing level of confidence in the intelligence from the field, the issue has been mentioned in interagency memos and discussed in meetings, several officials said, including at least one in the White House, although that was at what one official called “the working level.”

And because the matter involved a possible Russian role in killing American soldiers, several officials said, it almost certainly would have appeared in at least one President’s Daily Brief (PDB), a top secret intelligence summary that is delivered in person and sometimes only in writing to the president and top officials. Although Trump has sided with Russia over U.S. officials on other major issues, including Russian interference in the 2016 presidential election, CIA Director Gina Haspel and other officials would have included it in at least one PDB, as it’s commonly called. The Associated Press has reported that top officials at the White House were made aware of the bounty payments as early as early 2019.

When disagreements over intelligence included in the PDB arise, they often are noted in the document’s footnotes or text boxes, which officials compile between 2AM and 4AM each morning. In previous administrations, the president ordinarily received or read the PDB first, but in the Trump Administration, Pence, Secretary of State Mike Pompeo, and National Security Advisor Robert O’Brien often read it first and edit out material they think is inconclusive, particularly if it contradicts Trump’s policies, said a former senior CIA officer.

Even when Trump is briefed specifically on an issue, officials familiar with the briefings said, he does not always pay close attention or pursue issues that do not interest him, as former national security advisor John Bolton alleges in his new book.

McEnany would not confirm or deny to reporters that the intelligence in question was included in one of the PDBs during a June 30 press briefing, saying it was “a top secret document.” She did, however, say that Trump reads the daily briefings. “The President does read. And he also consumes intelligence verbally,” she said. “This president I’ll tell you is the most informed person on planet earth when it comes to the threats that we face.”

Intelligence agencies frequently reach different conclusions, usually based on their sources of information. The National Security Agency, for example, also had a lower level of confidence than the CIA and FBI in the January 2017 assessment that Russia interfered in the 2016 presidential election. Another former human intelligence officer recalls internal debates within U.S. intelligence more than a decade ago over who was bankrolling bounties to Taliban fighters of $25,000 per U.S. soldier and $50,000 for U.S. senior officers during his service in Afghanistan. Defense intelligence sources concluded the Russian government was likely providing the money as part of a campaign to frustrate the U.S. occupation of Afghanistan, just as the U.S. had similarly sabotaged the Soviet occupation in the 1980s, the former officer said, speaking anonymously to discuss the sensitive matter. But even then, U.S. intelligence officials never concluded that with high confidence, he added.

In this case, some officials said they are skeptical the Russians would risk rewarding members of the Taliban or other groups for doing something they’re already doing. “Why would they take a chance on that, knowing as they must that having it exposed would put Trump in a tough spot when (Russian President Vladimir) Putin wants to see him re-elected?” asked a second official.

Other current and former U.S. and British officials, however, said that some of today’s senior Russian military and intelligence officers were junior field officers in Afghanistan when the U.S.-backed mujahedeen drove Soviet occupation forces out of the country in 1989 and may still have an axe to grind. “Putin’s big military parade was a celebration of what became a glorious Soviet victory over the Nazis, but the Russians never forget their defeats, either,” said one U.S. official. “Hell, they still hate the Tatar Mongols.”

In addition, notes one official who finds the bounty report credible, unit 29115 of the GRU, the Russian military intelligence agency that has been providing assistance to the Taliban for years, has run other politically risky operations, including poisoning a former Russian spy and his daughter in Britain in 2018.

The schism between the intelligence agencies underscores the challenge of interpreting intelligence collected by agencies that use different tools. In response to the NSA’s objections that they had not intercepted communications confirming the alleged Russian scheme, one CIA officer drily responded: “Big surprise. The Russians didn’t call their friends and say, “I’ll give you $1,000 cash for every American infidel you kill? They use couriers — not phones and texts.”

A Taliban spokesman rejected the allegation that members of the group killed U.S. troops for bounty from Russia on Tuesday, referring to an earlier June 27 statement from the group that stated the Taliban “is not indebted to the beneficence of any intelligence organ or foreign country and neither is the Islamic Emirate in need of anyone in specifying objectives.”

The CIA has not confirmed its conclusion about the alleged Russian program publicly. “When developing intelligence assessments, initial tactical reports often require additional collection and validation,” Haspel said in a June 29 statement. “Hostile states’ use of proxies in war zones to inflict damage on U.S. interests and troops is a constant, longstanding concern. CIA will continue to pursue every lead; analyze the information we collect with critical, objective eyes; and brief reliable intelligence to protect U.S. forces deployed around the world.”

Pentagon spokesman Jonathan Hoffman also said that the Department of Defense, which includes the NSA, has “no corroborating evidence” to validate the reports but that it “continues to evaluate intelligence that Russian GRU operatives were engaged in malign activity against United States and coalition forces in Afghanistan.”

—With reporting by Kimberly Dozier and W.J. Hennigan in Washington 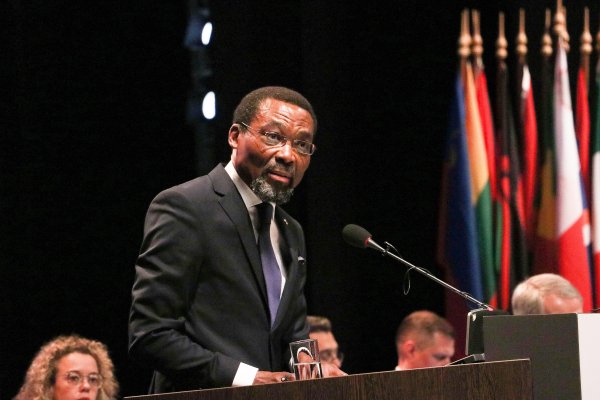 10 Questions for ICC Chief Chile Eboe-Osuji
Next Up: Editor's Pick