The American Hostages Left Behind for Trump's Taliban Peace Deal

Afghan Taliban fighters and villagers attend a gathering as they celebrate the peace deal signed between the U.S. and the Taliban in Laghman Province on March 2, 2020.
Wali Sabawoon—NurPhoto/Getty Images
By Kimberly Dozier

Two American hostages still missing in Afghanistan underscore the limits of a troubled peace deal the U.S. signed with the Taliban, and the Trump Administration’s diminishing ability to bend the militants to American will as the group steps up attacks on its Afghan allies.

As the U.S. was nearing an accord with the Taliban, the militant group’s hardline Haqqani faction kidnapped American contractor and Navy veteran Mark Frerichs in Afghanistan on Jan. 31. The Trump Administration, which was aware he was missing, went ahead and signed the Feb. 29 peace deal anyway. It provided for a Taliban ceasefire against U.S. forces in return for their eventual withdrawal, but made no specific mention of hostages, nor did it specify any protection for American contractors, current and former U.S. officials tell TIME.

It was a surprising concession from President Donald Trump, who has previously made bringing American captives home a high priority. Now some lawmakers in Washington are demanding the Trump Administration drive a harder bargain with the Taliban to find and free Frerichs and Paul Overby, another American missing in Afghanistan since 2014. Republican Congressman Michael Waltz from Florida, a combat veteran of Afghanistan, tells TIME that during a State Department conference call with U.S. lawmakers in late April, he asked why the U.S. “is continuing to negotiate with an entity—the Taliban/Haqqani — that took a hostage during the negotiations, and continues to hold him.”

He says Amb. Mary Catherine “Molly” Phee, the deputy on the U.S. team that negotiated the deal, replied that “hostage taking isn’t technically a violation of the deal because it’s not explicitly in the deal.” He recalls that she added that the State Department was “taking measures to have him released that she didn’t want to get into on the call.” Waltz says her response angered him and other lawmakers on the call.

A U.S. State Department official says Phee had an entirely different recollection of the call. “She was unequivocal that it is not okay for the Taliban to take or keep American hostages,” and that the agreement “contains an explicit commitment by the Taliban not to threaten U.S. security. That means no attacks of any kind against Americans,” the official said, speaking on condition of anonymity to discuss the controversial exchange.

Critics of the deal, like Waltz, say chief U.S. Taliban negotiator Amb. Zalmay Khalilzad seems to be more interested in preserving the accord he personally signed than turning the screws on the Taliban to secure Frerichs’ release or locate Overby. Keeping the deal intact is key to the U.S. troop drawdown Trump has promised his supporters ahead of the 2020 presidential poll.

Frerichs’ family, however, says they are placing their faith in Trump. “We know that President Trump does everything he can to get American hostages home safely,” Charlene Cakora, the sister of Mark Frerichs told TIME in a statement via an intermediary. “He won’t leave Mark behind. We have faith he won’t let his diplomats cut any more deals with the guys holding my brother until they agree to release him.”

The Feb. 29 peace deal was supposed to stop Taliban attacks on U.S. forces in return for their staged withdrawal over a 14-month period, and start peace talks between the militants and an Afghan delegation.

So far, those intra-Afghan talks have failed to materialize due to an ongoing dispute over the number of Taliban prisoners the Afghan government is willing to release as part of the deal. The Taliban have also stepped up their violent attacks on the Afghan security forces. The U.S. military mission to Afghanistan has stopped sharing detailed data of those incidents, according to the Special Inspector General for Afghanistan Reconstruction (SIGAR). The U.S. military would only tell SIGAR that in March, after the signing of the deal, the Taliban refrained launching strikes on U.S. forces while stepping up attacks on Afghan troops.

The Taliban has refrained from officially announcing the start of its spring fighting season in an apparent nod to the deal, but their stepped up assaults have prompted the State Department and the U.S. military to call on the group to ratchet down attacks on Afghan forces. “The world has asked the #Taliban to cease violence and focus on #COVID19. Now is the time to stop the violence,” wrote Sonny Leggett, spokesman for U.S. forces in Afghanistan, on Twitter on Saturday. “Attacks generate attacks, while restraint produces restraint,” he added in a later Tweet. “If the violence cannot be reduced – then yes, there will be responses.”

American commercial contractor Mark R. Frerichs, a former Navy diver and civil engineer from Lombard, Illinois, was kidnapped by elements of the Haqqani network on Jan. 31, current and former U.S. officials confirmed to TIME. The U.S. official and an Afghan official confirmed to TIME that the Haqqanis were behind the kidnapping. He was held for a period in southeast Afghanistan’s Khost province, bordering the Federally Administered Tribal Areas, a former U.S. official added. All the officials spoke on condition of anonymity to discuss the sensitive matter.

The militant Haqqani network is responsible for some of the most brutal and deadly attacks on U.S. forces in the almost-two-decade long conflict in Afghanistan. Its leader Sirajuddin Haqqani is the deputy commander of the Taliban, with a brother on the team that negotiated the deal with the Americans. Haqqani penned an opinion piece in support of the peace deal that appeared in the New York Times.

The FBI’s Hostage Recovery Fusion Cell would not comment on Frerichs’ case beyond saying that it is “working with our partners to ensure that Mark Frerichs and all Americans held hostage abroad are returned home,” in a statement emailed to TIME Monday.

The second American presumed to have been kidnapped in Afghanistan is freelance writer Paul Overby, who went missing in Khost City in mid-May of 2014 while conducting book research. There is a million-dollar reward for information leading to his safe return and recovery. His wife Jane Larson appealed for his release in an article published in 2017 in a Pakistani newspaper, but declined to comment for this article.

Taliban spokesman Suhail Shaheen tells TIME that his organization is not holding the contractor, nor is the Haqqani family. “Mark Frerichs is not kidnapped by Taliban. Of course, Dr. Khalilzad asked for his release but our people did not know about his whereabouts,” he said from Doha on Monday, referring to recent requests made by Khalilzad to find and release him. Shaheen offered no comment on Overby.

The U.S.-Taliban deal nearly didn’t happen when Trump walked away from negotiations in September 2019, after a Taliban bombing in Kabul that killed several people, including a U.S. soldier. The Taliban sought multiple ways to contact Trump directly to restart talks, and ultimately agreed to release American Kevin King and Australian Timothy Weeks, who had been held by the Haqqani network for three years, in November, in return for three high-profile Haqqani prisoners including Sirajuddin’s brother Anas, Afghan officials tell TIME. The U.S. talks resumed in December.

But Frerichs and Overby were still missing when Trump signed off on the Feb. 29 deal that laid out a timetable for a complete U.S. drawdown, based on conditions including progress in the intra-Afghan talks.

That’s a stark change from Trump’s own handling of previous hostage cases, and from previous administrations. Legendary U.S. negotiator Amb. Richard Holbrooke famously stopped talks over the Dayton Accords for a week, refusing to talk peace until Serb militiamen turned over a U.S. reporter, recalls James O’Brien, the first U.S. Envoy for Hostage Affairs, a position created during the Obama Administration. “This was a test,” he told TIME, saying in effect, “how can I trust you to deliver peace if you can’t deliver this one American?”

The peace deal appears to do little to protect any American not wearing a uniform. One senior administration and one former U.S. official tell TIME that the deal the U.S. signed with the Taliban doesn’t apply to the thousands of U.S. contractors who work to protect, supply and feed the U.S. military. “The key is wearing a uniform,” the administration official tells TIME. “If the individual is killed or kidnapped wearing a U.S. armed forces uniform, then the Taliban would be in violation of the treaty. However, contractors technically do not come under the deal.”

In fact, the conditions that constitute a violation of the peace deal are “incredibly narrow,” says the former U.S. military official who recently served in Afghanistan. “If the Taliban shot a uniformed military member and publicly took credit, it would be a violation….And if the person was affiliated with the military but not in uniform (a contractor or, potentially, civil servant), it would not be a violation,” the official says. Both officials spoke on condition of anonymity to discuss the sensitive matter.

Another U.S. military official familiar with the deal agreed that contractors are “a big loophole” in the agreement in general, adding that the status of international facility and maintenance contractors is unclear, “particularly those employed by firms not registered in the U.S.” or from other coalition nations.

Not only is the status of their protection under the peace deal uncertain, it is equally unclear whether they are bound to the same withdrawal timetable as the U.S. troops they support. If those contractors have to leave in the same 14-month window as U.S. troops do, the official said, the impact would be devastating on Afghan forces because the contractors maintain virtually all their logistics and maintenance. “If their Blackhawks and A-29s were grounded, the Afghan security forces would lose a lot of their mobility and combat air support,” the official said, speaking anonymously because he was not authorized to speak publicly.

U.S. Central Command and the U.S. military in Afghanistan did not respond to requests for comment. The State Department official, however, insisted the contractors are covered by the agreement, which the official said “contains an explicit commitment by the Taliban not to threaten U.S. security. That means no attacks of any kind against Americans.” 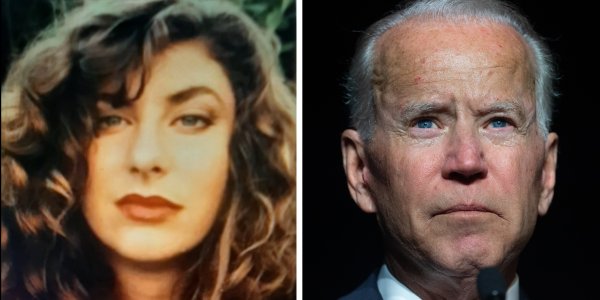 What We Know About the Assault Allegation Against Biden
Next Up: Editor's Pick