The final results of Tuesday’s Democratic primary in New York aren’t all in yet, as a large number of New Yorkers voted via absentee ballot due to the COVID-19 pandemic. These ballots won’t be tabulated until June 30, per the Associated Press. However, early results in two races show that New York City Councilman Ritchie Torres and progressive lawyer Mondaire Jones are each in a strong position to win their primaries.

“Growing up poor, Black and gay, I would never have imagined that someone like me could run for Congress, let alone be a leading contender for the Democratic nomination,” Jones tells TIME. “I’m really grateful for this opportunity to inspire people and to change history.”

Torres, 32, is running to represent New York’s 15th Congressional District in the Bronx. He’s has been a breakout star in city politics; he was elected to New York City Council back in 2013 at 25, becoming the youngest member of the council and the first openly gay elected official in the Bronx.

The Democratic primary for the 15th District has been crowded: At least 12 candidates ran to replace retiring Democratic Rep. Jose Serrano, including controversial New York City Council member Rubén Díaz Sr., who has a long history of homophobic comments, has praised President Donald Trump and opposes abortion. As the Wall Street Journal reported on June 17, national Democrats had worried that the crowded field would split the progressive vote and allow Díaz to prevail, given his high name recognition in the borough. A June 3 poll from liberal think tank Data for Progress found that Diaz led the crowded field with only 22% of the vote, followed by Torres at 20%.

As of around 2 p.m. ET on Wednesday, Torres had 30.5% of the vote with candidate Michael Blake following with 19.4% and Diaz following with 14.8%, per the New York Times.

On Tuesday night, Dave Wasserman, an editor of the non-partisan Cook Political Report, called the race for Torres.

“I’m not prepared to declare victory until every vote is counted, but even if I win the election, it is governing that matters and delivering results for the everyday people of the Bronx,” Torres said in a statement to TIME. “It would be the honor of my life to represent this borough. It’s my home.”

“I would not be here today if it were not for my mother,” Torres continued. “The South Bronx is full of mothers like mine who have have suffered, struggled and sacrificed so we can have a better life. The opportunity to represent the essential workers of this borough and the powerful mothers of the Bronx, would be the culmination of a dream.”

Jones was among a pool of candidates running to replace long-time Democratic Rep. Nita Lowey, who is stepping down after serving in Congress for more than three decades.

The 33-year-old worked in the Department of Justice during the Obama administration and recently served as an attorney in the Westchester County Law Department. He has the backing of the progressive wing of the party, including Sen. Bernie Sanders, Sen. Elizabeth Warren and Rep. Alexandria Ocasio-Cortez. (Ocasio-Cortez resoundingly won her own primary in New York’s 14th district on Tuesday night.)

The race — described by the Times as a “seven-way- free-for-all” — also included Adam Schleifer, a former California federal prosecutor, Evelyn Farkas, a former deputy assistant secretary of defense under the Obama administration and David Carlucci, a New York state senator. Schleifer, the son of billionaire Leonard Schleifer, had spent more than $4 million on the race, around $1 million more than the other six candidates combined, according to the Times.

On Tuesday night, Wasserman of the Cook Political Report called the race for Jones.

“The historic nature of this moment is not lost of me,” Jones tells TIME, adding that “it’s not just about representation. It’s about what your lived experience brings to policy discussions.”

Jones says he’s standing on the shoulders of many who came before him, citing the civil rights leader Bayard Rustin as just one example. Rustin planned the 1963 March on Washington, but was asked to publicly distance himself from Martin Luther King Jr. because of concerns over any controversy his being openly gay could have brought to the event.

“Growing up, had I been able to see someone quite like myself in Congress, it would have been direct evidence of the fact that things really do get better,” he shares. “This has been a long time coming — approximately 244 years.” 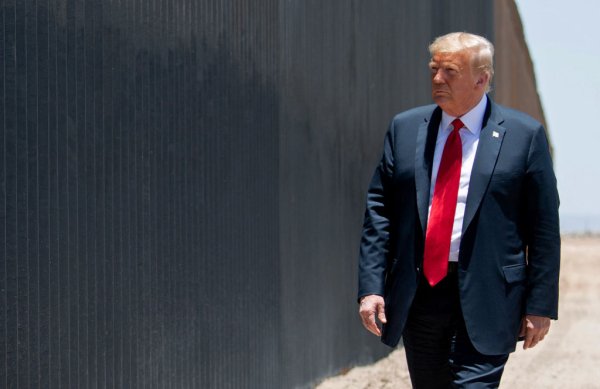 Back Against the Wall
Next Up: Editor's Pick