The Story Behind I’ll Be Gone In the Dark, HBO’s New Docuseries About Michelle McNamara’s Search or the Golden State Killer

The true crime writer Michelle McNamara devoted her life to uncovering unsolved mysteries. In the years prior to her unexpected death in 2016, McNamara focused on the case of the Golden State Killer, the name she coined for the serial rapist and murderer who attacked dozens of people across California in the 1970s and ‘80s and eluded capture by law enforcement for several decades until 2018.

McNamara’s work toward tracking down the Golden State Killer—and the ways in which the investigation took over her life—are at the center of I’ll Be Gone in the Dark, a six-part HBO documentary series based on her book of the same name. Directed by Liz Garbus, who worked with McNamara’s husband, the comedian and actor Patton Oswalt, to piece together a story from archives, the series uses McNamara’s own words to explain her obsession with the Golden State Killer’s case and its eventual psychological toll on her. In the spirit of McNamara’s work, the series also draws deeply on interviews with survivors and detectives who discuss the trauma the Golden State Killer caused during a time when victims of sexual assault often stayed silent out of shame.

“When these women went through this, there was this lack of cultural language around sexual assault,” Garbus tells TIME. “The beautiful thing about those who chose to speak with us is that it was a part of their healing process. That pain wants to come out into the light in order to allow you to walk forward with it.”

With a consistent focus on the stories of survivors of violent crimes, McNamara’s work helped to shape what’s now become the highly popular true crime genre. Through her website, TrueCrimeDiary, established in 2006, McNamara tracked numerous cold cases and pieces of breaking news, pulling at threads and constantly finding new angles to investigate. Her interest in unsolved crimes dated back to an incident from her childhood in Oak Park, Ill., when a woman named Kathleen Lombardo was killed near where McNamara lived. Fourteen at the time, McNamara was drawn to the site where Lombardo’s body was found, and she wound up picking up pieces of her broken Walkman at the scene.

The woman’s killer was never caught; McNamara found a lifelong obsession. During her career, McNamara became known for pursuing justice for the survivors of the violent, murderous figures she exhaustively researched. The case of the Golden State Killer absorbed her for years—after she published an account of her pursuit of the serial rapist and murderer in Los Angeles Magazine in 2013, McNamara began work on a book to expand the story.

As I’ll Be Gone in the Dark also shows, McNamara was a loving mother and wife, an empathetic listener and an insightful interviewer. Each episode is guided by McNamara’s own voice, brought through recorded voice memos, podcast episodes, voicemails and various readings—so viewers become familiar not only with her fascination with unsolved cases, but also her personality, and the ways she could be loving and open, and, as her focus on the Golden State Killer grew, how she could often feel overwhelmed and scared.

“She was balancing this act of writing about herself while also writing about the crimes and the survivors,” Garbus says of crafting the series around McNamara’s words. “We wanted to do that as well.”

‘Swimming through the darkness’

As testimony from survivors, interviews with police officers and detectives and pieces of physical evidence came together, McNamara was able to compile most of I’ll Be Gone in the Dark before she died in April 2016. She did not live to see the book published, nor did she get to see the Golden State Killer eventually arrested. Interviews with McNamara’s friends and family reveal that although people knew she was intent upon finding the Golden State Killer, even those who were close to her were not aware of her high levels of anxiety and distress as she delved further into the case. In an effort to ameliorate the stress and anxiety, McNamara took prescription drugs and accidentally overdosed. She died in her sleep on April 21, 2016. Following her death, Oswalt reached out to the researcher Paul Haynes and the true crime writer Billy Jensen to help flesh out what McNamara had left behind and finish the book, which became a bestseller in 2018. When it came time to craft the HBO series, Oswalt says he gave McNamara’s archives to Garbus to ensure the episodes would be as much from her perspective as possible.

“She had a very agile and original mind, and I didn’t want anyone paraphrasing it,” he says. “I just decided to hand over everything so it was in her voice.”

In the series, Garbus repeatedly references a chilling scene from the 1954 film Creature from the Black Lagoon—an important cultural touchstone for both McNamara and Oswalt—which shows a woman swimming while unaware that a monster is mirroring her actions underneath the water’s surface, to represent how darkness can lurk without anyone ever knowing. During her life, McNamara sought to get to the bottom of that darkness, while battling her own demons, according to Oswalt.

“Liz really captured the idea of how you don’t know when you’re swimming through the darkness,” Oswalt says. “You could very well be enjoying what seems like a pleasant floating experience and there are things reaching up for you that you’re not even sure of.”

The ‘powerful absence’ of the Golden State Killer

In April 2018, police arrested Joseph James DeAngelo, then 72, alleging that he was the serial killer and rapist known as the Golden State Killer, who carried out murders, rapes and break-ins in Sacramento, the San Francisco Bay Area and parts of southern California in the ‘70s and ‘80s . A former police officer, DeAngelo was linked to more than 45 rapes and a dozen murders throughout California through DNA technology, following decades of evading law enforcement. I’ll Be Gone in the Dark depicts DeAngelo finally getting caught and, through interviews with members of his family, explores how his own childhood trauma might have led to abusive behavior later on. The series reveals that prior to carrying out the alleged murders and rapes, DeAngelo was engaged to a woman who broke up with him due to several disturbing warning signs. Garbus says her interest in knowing more about DeAngelo’s life was not to offer an excuse for his alleged actions, but to carry McNamara’s work even further.

“Michelle spent a chunk of her life looking for this guy. For us to not try to understand him a little bit would be a failing,” she says. “There’s a lot to learn from how a person like that comes to be. His family members are survivors, too.”

The series’ most cathartic moment comes not when DeAngelo is arrested, but in a scene toward the end in which the people who survived his violence gather together, finally able to talk freely with one another about what they went through without blaming themselves. Survivors of the Golden State Killer also include the husbands and boyfriends of the women who were raped, many of whom were tied up in other rooms while he carried out the attacks. The bulk of these romantic relationships crumbled, often out of an inability among couples to talk about what they endured, according to the series. Decades after the horror, many of the victims are able to put words to what they experienced and break free of the fear. For Gay Hardwick, one of the many survivors who speaks in the series, DeAngelo’s arrest has brought relief, while also dredging up some unwanted memories.

“But I am better in my daily life,” Hardwick says in the series, “and in my ability to sleep better at night and open the window, wake up and not be certain that death is in my home. It is hard for people to understand … how it doesn’t go away.”

DeAngelo, now 74, who faces charges on 13 counts of murder and kidnapping, is expected to plead guilty as part of a deal that will spare him the death penalty, the Los Angeles Times reported in June. His capture, undoubtedly driven by McNamara’s work, which reignited interest in the case, would have seen her feeling “great for the victims,” Oswalt says, though she would have been likely to be “immersed in two or three other cases.” In the end, her work was about laying out the Golden State Killer’s impact; his identity was almost besides the point, according to Garbus.

“She said, as soon as there’s a face on this person, it’s just a loser. Once you see that pasty, old horrible dude, it’s not even interesting in some ways,” she says. “It’s the powerful absence that’s so haunting.” 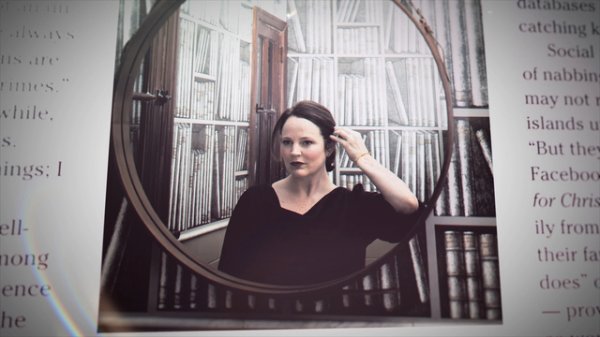 I'll Be Gone in the Dark Humanizes True Crime
Next Up: Editor's Pick