When President Donald Trump fired the powerful U.S. attorney in Manhattan over the weekend who had been leading investigations into some of his associates, it was the latest incident highlighting the president’s seeming willingness to subvert the traditional independence of the Justice Department when it serves his own interests.

Even for an Administration that is fluent in high-profile ousters, the circumstances of Geoffrey Berman’s dismissal were dramatic: Attorney General William Barr tried to fire him Friday night, but Berman refused to step down, forcing Trump to fire him the following day. The result of Berman’s removal is just as stark. The man who led the Southern District of New York’s (SDNY) investigations into two of Trump’s personal lawyers, as well as other probes that had rankled the President, has been removed from his position against his will. The move has raised acute concerns given both the nature of Berman’s work at SDNY and Trump’s own history of statements and actions eroding the independence of the DOJ — or at the very least, the appearance of it.

“How we view Berman’s removal should be informed by Trump’s history, which involves firing (or attempting to fire) multiple DOJ and FBI officials in order to influence investigations of himself and his associates,” says Renato Mariotti, a former federal prosecutor now at Thompson Coburn. “Even if Trump lacked that history, and if Barr’s announcement were less bizarre, I would nonetheless be concerned if the head of a U.S. Attorney’s office was removed by a president when the office was investigating the president’s personal lawyer and inaugural committee. But the present circumstances raise much more serious concerns.”

The White House said Berman was removed because the Administration wanted to give the position to Jay Clayton, the chairman of the Securities and Exchange Commission. White House Press Secretary Kayleigh McEnany said at a June 22 press briefing that Clayton had expressed interest in returning to New York City, and that the White House wanted to “keep him in government.” It is unlikely, however, that Clayton will be confirmed by the Senate given the opposition by both New York senators, and deputy U.S. attorney Audrey Strauss has been named acting head in the meantime.

When asked by TIME at Monday’s briefing if Berman was fired because he oversaw investigations into Trump’s close associates, including Michael Cohen and Rudy Giuliani, McEnany said, “No, he was not,” and added: “This will not disrupt the cases being handled by the district, which will proceed as normal.”

Read More: Fearing Internal Dissent Ahead of the Election, Trump Expands His War on Washington

Berman had been U.S. attorney for the Southern District of New York since 2018. Over the course of his two years on the job, he oversaw multiple investigations into members of Trump’s inner circle. He led the prosecution of Trump’s former personal lawyer Michael Cohen for Cohen’s role in arranging hush money payments on behalf of Trump to adult-film star Stormy Daniels. Cohen pleaded guilty to crimes including campaign finance violations and making false financial statements, and he implicated Trump in the scheme under oath. (Trump denies having an affair with Daniels and denies any wrongdoing associated with the payments.)

Berman’s office has also been looking into the business dealings of Trump’s personal lawyer Rudy Giuliani, and issued a grand jury indictment last year against Lev Parnas and Igor Fruman, two of Giuliani’s associates, for their alleged use of a shell company to make an illegal donation to a super PAC supporting Trump’s reelection.

Separately, SDNY has reportedly been investigating possible financial impropriety in Trump’s inaugural committee, which may be one of a number of investigations that Robert Mueller spun off from his special counsel investigation. The inauguration probe likely “goes very far and wide,” says Jed Shugerman, professor at Fordham University School of Law, “and many of us have been wondering what has been going on for the last 15 months since Mueller wound his investigation down.”

The key question in Berman’s firing, Shugerman says, is “Why now?” He predicts the Southern District is getting ready to hand down indictments— in the inaugural committee investigation or others— before the usual time frame to make a splashy indictment this year would close, so as not to interfere with the presidential election. “It would be stunning to me if the Southern District… had not made enough progress on any of the number of scandals,” Shugerman says, for the office not to be pushing “to make an indictment now within the June-July window.”

Whether or not Berman’s office is nearing a new phase in any investigations into Trump’s associates, Berman has angered Trump with other work that Trump promised to quash in order to curry favor with foreign leaders, according to a new book by Trump’s former national security advisor John Bolton. Berman oversaw an investigation into Turkish bank Halkbank, a probe Bolton claims Trump promised Turkish President Recep Tayyip Erdoğan would be “fixed.” According to Bolton’s book, during a side meeting at a summit in Buenos Aires late in 2018, Erdoğan gave Trump a memo from the law firm that represented Halkbank that claimed the bank was innocent. Trump flipped through it, then said he believed Halkbank was “totally innocent”.

“Trump then told Erdoğan he would take care of things, explaining that the southern district prosecutors were not his people, but were Obama people, a problem that would be fixed when they were replaced by his people,” Bolton writes.

Given all of the concerns over Berman’s firing, Congress has vowed to take action, and House Judiciary Chairman Jerrold Nadler, a Democrat from New York, has said he will investigate the matter. “Neither the President nor the Department of Justice have offered any explanation for Mr. Berman’s purported dismissal,” Nadler said in a statement. “We know that the U.S. Attorney’s Office for the Southern District of New York is engaged in investigations aimed at President Trump’s inner circle.” Nadler said he will hear from two whistleblowers this week about Berman’s firing and hopes to secure Berman’s testimony as well. “I’m sure he will testify,” Nadler said on CNN on Sunday.

Jonathan Turley, professor at The George Washington University Law School, notes that in Barr’s confirmation hearing, in which Turley testified on his behalf, Barr said he would not allow any move seeking to influence an investigation. “That is the hill to die on for an Attorney General,” Turley, who also testified against Trump’s impeachment in the House last year, says. “The measure is whether Barr was acting to undermine the investigations.”

While Turley says he hasn’t seen evidence of that intent in Berman’s case, he acknowledges there are real questions raised by the firing given the prosecutor’s body of work over the past two years, and he “entirely supports” a congressional investigation.

“There are legitimate concerns,” Turley says, that “should be addressed.”

—With reporting by John Walcott and Brian Bennett/Washington 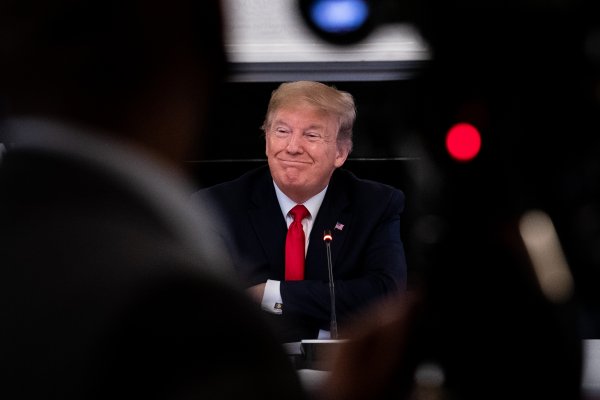 Trump’s Twitter Has Defined His Presidency. It Won’t Change
Next Up: Editor's Pick