Speaking under oath, Cohen also said he worked “at the direction of the candidate” to keep a former Playboy model and a pornographic film actress quiet about alleged affairs they had with Trump, and that those actions were specifically designed to influence the 2016 presidential election. Although that candidate was not named, it was a clear reference to then-candidate Trump, for whom Cohen had worked for over a decade.

“Did you know what you were doing was wrong and illegal?” the judge, William H. Pauley III asked about these actions.

Wearing a dark suit and a gold tie and flaked by two of his attorneys, Cohen entered the court room through a side door at 4:03 p.m. and proceedings commenced less than 15 minutes later. He told the presiding judge that he had a glass of 12-year-old Glenlivet Scotch on the rocks the previous night but was now sober and aware of what he was doing.

Cohen appeared stoic throughout the nearly hour-long hearing, speaking only in response to the judge’s questions about his understanding of the plea agreement and reading the charges against him. At one point, Cohen shook his had when one of the prosecutors read the charges against him and described evidence they gathered to support their claims.

Cohen, who relished his role as Trump’s hard-charging “fixer” on sticky personal and professional problem, is the latest of Trump’s top associates to run into serious legal trouble.

At the same time that Cohen was appearing in court, a jury in Virginia announced that it had found Trump’s former campaign chairman, Paul Manafort, guilty on eight of 18 counts of bank and tax fraud in a case brought directly by Special Counsel Robert Mueller.

The Cohen investigation was referred to prosecutors in New York’s Southern District by Mueller, who has been investigating Russian meddling in the 2016 election and any contacts the country had with the Trump campaign.

Unlike those cases, however, a Cohen plea on campaign finance charges would be the first time that a Trump associate was found guilty of a crime directly related to their work for the Trump campaign.

Trump has denied having an affair with McDougal through a White House spokesperson and claimed on Twitter that he only paid Daniels to stop “false and extortionist accusations made by her about an affair.”

Since the raid, Cohen has switched attorneys, obtaining the counsel of Guy Petrillo. In June, he stepped down from a role as deputy finance chairman of the Republican National Committee.

Cohen’s bail was set at $500,000. Collectively, his charges could amount to a maximum imprisonment over 65 years. His sentencing is set for Dec. 11, and cannot be determined until the probationary report is issued. Until his sentencing, Cohen is only allowed to travel to parts of New York, Illlinois, Florida and Washington, D.C.

Read More: Donald Trump Relied on Michael Cohen to Weather the Storm. Now The President Is On His Own

In late July, CNN obtained a recording that Cohen made of Trump discussing with him buying the rights to McDougal’s story about having an alleged affair with Trump years earlier, one way in which these kinds of scandals are kept quiet.

Cohen was proud of his role as Trump’s fixer, once comparing himself to TV character Ray Donovan and telling Vanity Fair in 2017 that he “would take a bullet for the president.” In an interview with ABC News in July, he changed his tone, however.

“My wife, my daughter and my son have my first loyalty and always will, he said. “I put family and country first.”

Lately Cohen and Trump’s relationship appears to have deteriorated, with Trump criticizing the recording on Twitter and his new attorney, Rudy Giuliani, saying that Cohen is not a credible witness and has “lied all his life.” 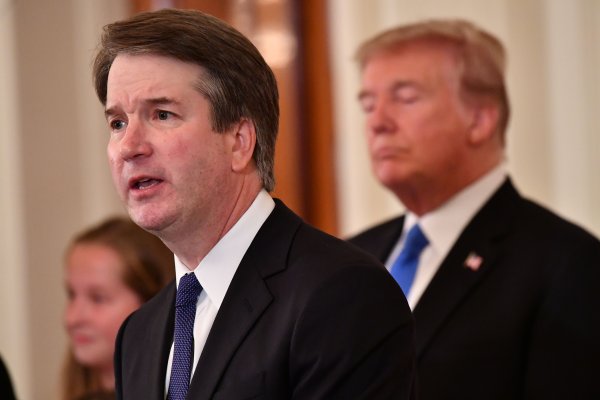 How Democrats May Adapt to Kavanaugh on the Court
Next Up: Editor's Pick