People visit the memorial dedicated to Rayshard Brooks in front of the Wendy's restaurant on June 16, 2020 in Atlanta, Georgia.
Joe Raedle/Getty Images
By Sanya Mansoor

A college in Georgia — Clark Atlanta University — and an alumna from the institution have promised the four children of Rayshard Brooks full scholarships to attend the university, they announced Saturday.

Brooks, a 27-year-old Black man, was killed by police outside a Wendy’s restaurant in Atlanta on June 12 after being approached by officers responding to complaints of a car blocking a drive-thru. Two police officers have since been charged in relation to the fatal shooting. Brooks’ death sparked tense protests in Atlanta and contributed to the nationwide outrage over police brutality following the police killing of George Floyd in May.

Clark Atlanta University said in a statement that the scholarships would be “worth more than $600,000” and “cover full tuition, meals, room and board for all four children” when they are done with high school and ready for college.

“It was without hesitation that we made the decision to partner with our notable alumna and entrepreneur Pinky Cole to help the family and children of Mr. Rayshard Brooks,” said Clark Atlanta University President George T. French. Jr in a press release. “The senseless death of Mr. Brooks will undoubtedly have long-term financial effects on the family and these scholarships will not only provide them with a means to access a world class education, but will help them on their pathway of success,” French said.

“When you lose someone so close to you, there is a level of momentum that is lost because a piece of you is gone. I saw Rayshard’s wife Tomika’s pain, and my heart led me to want to help her and her children,” Cole said. “Rayshard Brooks could’ve been my brother, my father or even my significant other. I wanted to remind her that it takes a village and we are a part of her village.” 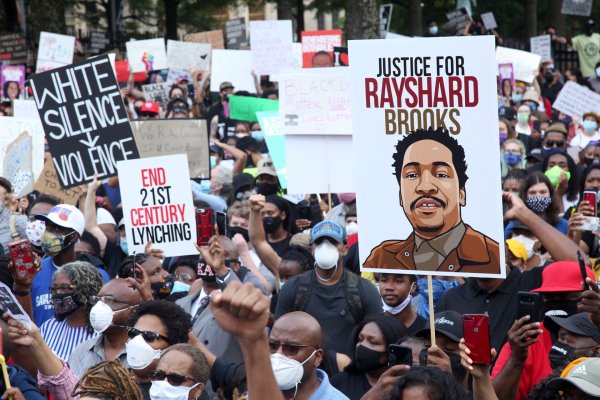