After Wayne Fella Morrison’s death in detention in 2016, his sibling Latoya Aroha Rule organized rallies to call for justice for him and the hundreds of other Aboriginal people who have died in custody across Australia.

The circumstances of Morrison’s death drew national attention at the time: He was pinned down by correctional officers. His hands and feet were bound with restraints, a spit-hood was pulled over his head and he was placed face-down in the back of a prison van. When he was taken out, minutes later, he was blue and unresponsive.

About 500 people showed up for a march in Adelaide in October 2016 and 150 supporters turned out to events in Melbourne and Sydney.

But, earlier this month, tens of thousands of took the streets for Black Lives Matter protests in cities across Australia following the killing of George Floyd in the United States. Rule, who uses the pronoun “they,” has been blown away by the response. “Wayne’s name is up on banners in marches of tens of thousands of people. That’s not something I ever thought would be possible. It’s incredible,” they say.

Floyd’s death in Minneapolis, Minn. has sparked protests in solidarity on almost every continent. Some 9,000 miles away in Australia, it is focusing renewed attention on a longstanding problem: the deaths of Aboriginal people in custody.

“A lot of people were not aware of the amount of Aboriginal deaths in custody that were occurring,” says Cheryl Axleby, co-chair of the National Aboriginal & Torres Strait Islander Legal Services (NATSILS) and the CEO of the Aboriginal Legal Rights Movement in Adelaide.

She tells TIME: “I think it’s sort of ignited a passion in mainstream Australians who are saying, ‘This is not acceptable in our country, and why haven’t we done anything about it?'”

‘Not getting the results we want’

Aboriginal Australians have faced a legacy of oppression. Mass killings and imported diseases wiped out the majority of the population within years of the British arrival in the late 18th century. Later, they were subject to officially-sanctioned killings and the forced removal of Aboriginal children from their families. Members of the so-called Stolen Generation were placed in church missions and other institutions in a bid to assimilate them into white society.

Writing in the Sydney Morning Herald on Monday, University of New South Wales professor (UNSW) Don Weatherburn said: “You can’t invade a country, drive the original inhabitants off their land, destroy their way of life, pass on your diseases, herd them into camps or on to islands, forcibly remove their children and expect this to have no long-term adverse effects.”

Today, Aboriginal people die about 8 years earlier and earn about 33% less than other Australians. They are more likely to struggle with mental health issues and to face domestic violence. There is also a high proportion of Aboriginal people in the prison system. In 2019, Indigenous Australians, who account for only about 2 to 3% of Australia’s population, made up 28% of the prison population.

June Oscar, the Aboriginal and Torres Strait Islander social justice commissioner at the Australian Human Rights Commission, tells TIME that over the last 10 years, there has been an 88% increase in the number of Aboriginal people incarcerated.

Such trends are reflected in the comparatively high number of deaths of Indigenous Australians in custody. At least 437 Aboriginal people died in custody from 2008 to 2020, according to Deaths Inside, a reporting project by Guardian Australia.

An official inquiry into previous deaths in custody made 339 recommendations to address the problem in 1991. A government-ordered review in 2018 found that 78% of the recommendations were fully or mostly implemented. However, many experts say meaningful changes haven’t been made. A group of academics called the report “misleadingly positive” in a letter published at the end of 2018.

Prime Minister Scott Morrison said on June 12 that reducing the incarceration rate is a complex and difficult task. Official statistics show that more than 60% of Aboriginal people who died in prison from 1990 to 2004 were there on violent crimes, and 65% of deaths were “self-inflicted.”

Still, not one person has yet been convicted in the death of an Aboriginal person in custody, although police officers involved in the recent deaths of two Aboriginal people have been charged with murder and are awaiting trial, and a coroner has referred the 2017 death of 55-year-old Tanya Day to prosecutors.

A ‘real potential for change’

Although the issue has been a talking point for Australians for years, the problem appears to be entering the public conversation in a way that it hasn’t in the past. Since the start of June, tens of thousands of people have marched across Australia, in Sydney and Melbourne and in smaller cities like Darwin, Perth and Adelaide.

Those marching have held signs reading “Black Lives Matter” and others with the names of those who have died in custody scrawled on them. One of the deaths highlighted is that of David Dungay Jr., who died in 2015 at the age of 26 after being held down by prison guards as he screamed “I can’t breathe” several times.

“To see 20,000 Australians to show up and rally in solidarity with David Dungay Jr. and George Floyd in the middle of a pandemic is astounding, and for the first time, I sense a real potential for change,” says George Newhouse, the lead lawyer at the National Justice Project, which is working with the Dungay family.

Thousands of protestors marching in solidarity with "Black Lives Matter" down Castlereagh Street in the CBD in Sydney, Australia on June 06, 2020.
James D. Morgan—Getty Images

Local media reports that 25,000 Australians donated to a GoFundMe campaign set up for Indigenous rights in the first days June, contributing a combined $1 million.

“I’ve taken too long to open my eyes up on what’s happening in my own backyard,” commented someone who donated to a fundraiser for the Dungay family.

The Prime Minister has sparked criticism for his response to the protests. He said in early June that there was “no need to import things happening in other countries here to Australia,” and he has called for those who protested in violation of COVID-19 social distancing rules to face charges. He also drew widespread criticism when he said during a June 11 interview that Australia had no history of slavery, a claim he later walked back and apologized for.

But there are already some signs that the latest protests is sparking government action. Following protests in Sydney, a parliamentary inquiry into how deaths in custody are investigated in the state of New South Wales was launched.

“It is a really good thing now that Australia has sort of opened its eyes to what’s going on in its own country, but it’s heartbreaking, it takes up to tens of thousands of people protesting for them to acknowledge what we’re going through,” 28-year-old Apryl Day, the daughter of Tanya Day, tells TIME.

The elder Day died from head injuries after being taken off a train for public drunkenness and placed in a cell, where she fell and hit her head. An investigation into her death found that the train conductor’s decision to call the police was “influenced by her Aboriginality.” Prison officers failed to check on her every 30 minutes as per guidelines.

“She should be here today with her family, her grandkids. She deserved so much more than what she received,” Apryl Day says.

A major shift is needed

Some are cautious about what this moment might mean for Aboriginal rights. “There is a national reflex of denial and deflection of concerns about discrimination,” Tim Soutphommasane, a sociology and political theory professor at the University of Sydney, tells TIME. “Many Australians simply don’t see racism as a problem within our institutions.”

A study released this month by researchers at Australian National University found that three in four Australians have an implicit negative bias against Indigenous Australians.

Actor and writer Meyne Wyatt, whose recent television performance of a monologue about racism in Australia has gained national attention, tells TIME that he had his first encounter with law enforcement when he was just 11 years old. Police stopped him on his way to a skate park.

“We were stopped for no reason other than racial profiling,” Wyatt says. “From that point on, I knew the relationship that I had with police that would be a negative one.”

UNSW’s Weatherburn, who is also a former director of the New South Wales Bureau of Crime Statistics and Research, told TIME that police behavior towards Aboriginal people did need to improve, but a wider set of problems—unemployment, substance abuse, violence, poor school performance and child neglect— also needed to be addressed.

“Everybody is picking the low hanging fruit, the change to police procedure, and that’s important but it’s not going to address the elephant in the room,” he said.

While many of the demands of those fighting for Aboriginal peoples’ rights do call for changes to policing, like accountability for deaths in custody and independent investigations of police abuse allegations, many recognize the need for wider changes. Activists are calling for treatment options (rather than criminal penalties) for drug and alcohol abuse, and are demanding anti-racism programs in schools and workplaces as well as an end to what is seen as a systemic racism that leads to disproportionate incarceration rates. Many also say the age of criminal liability should be raised from 10 to 14 years old to stop Aboriginal children from ending up in jail, which can push them into a lifetime of cycling in and out of the prison system.

Activists say that they hope the Australians now paying renewed attention to their cause will help them to make their voices heard.

“We’ve seen great support from non-Aboriginal people asking what they can do, they’re donating to Aboriginal causes, they’re raising awareness,” says Axleby. “We’re hoping they will take these issues up with their own local politicians and those in power to say that change must occur.”

Some of those fighting for justice say the movement in the U.S. gives them reason for optimism.

Grieving for Morrison, Latoya Rule cites a call for Minneapolis to defund its police department and invest in community development as a major boost. “I got so much hope I cried. That looks like real structural, systemic change, and that’s a moment that I’d love to see here in Australia.” 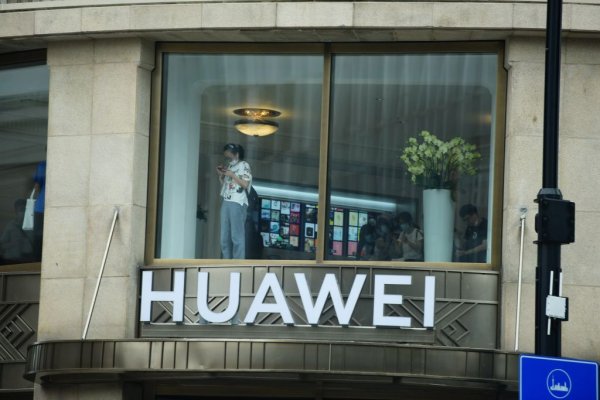 Huawei on Pentagon List of Chinese Military-Controlled Companies
Next Up: Editor's Pick