As Da 5 Bloods Hits Netflix, Black Vietnam Veterans Recall the Real Injustices They Faced During and After the War

It’s often said that relationships between soldiers transcend race. Movies, books and personal testimonies have told us repeatedly that when two people fight for their lives alongside each other, a lasting sense of camaraderie and understanding is forged between them, regardless of background.

But many Black veterans of the Vietnam War have told a different story. Although many formed enduring interracial friendships while fighting overseas, inequities and blatantly racist treatment stained their experiences both during and after the war. In Vietnam, they were disproportionately sent to the front lines, jailed or disciplined at a higher rate and promoted less often. Upon their return to the United States, they were presented with menial job opportunities, denied support by Veterans Affairs and received little empathy from their own communities.

A new Spike Lee film debuting on Netflix on June 12, Da 5 Bloods, captures this continuing struggle, depicting four Black veterans who are filled with resentment and trauma as they return to Vietnam 50 years later. There, they attempt to find the body of a brother-in-arms as well as buried gold, and reckon with their complicity in an “immoral war that wasn’t ours,” as one character puts it.

In conjunction with the film’s release, TIME spoke with veterans and historians about the troubled history of Black Vietnam veterans, and the ways their stories connect to the current protests sweeping the nation.

“We have enough problems fighting white people back home”

The Vietnam War was the first American war in which its troops were fully integrated, a development that was supposed to turn the page on a ghastly history of institutional racism in the military. In 2016, a study released by the Equal Justice Initiative that found that between 1877 and 1950, “no one was more at risk of experiencing violence and targeted racial terror than Black veterans.” After World War II, the G.I. Bill was constructed in a way that denied benefits to many Black soldiers—and only increased the gaps in wealth and education between white and Black Americans.

Hasan Kwame Jeffries, a professor of African-American history at Ohio State University, says that before Vietnam, African-American soldiers were on the bottom of a rigid caste system. “They were in service positions; they were mostly put in positions to do the grunt work,” he tells TIME. “It’s also important to understand that even though it was segregated, it wasn’t equal. Black soldiers were receiving inadequate training and resources.”

In 1964, American troops began arriving in Vietnam in large numbers following the Gulf of Tonkin incident, with the new integration policies a source of optimism. But many Black soldiers were immediately faced with discrimination and racism during basic training, which typically took place in the Jim Crow south. “Although we’re talking about an era after the Civil Rights Act, officers and soldiers had deep Southern racist roots,” Jeffries says. “The racism was there: it was real and felt between soldiers.”

These structures persisted overseas, even if Black and white soldiers had to fight side-by-side. “Out in the field, everyone had to depend on everyone,” Duery Felton, a veteran, says. “But when you got back to base camp, you had what you’d call de facto segregation.” In Saigon, Black troops often spent their time off in a section of the city that would come to be known as Soulsville; meanwhile, their white counterparts were being promoted at a higher rate.

“Soldiers were still dealing with those deeply rooted perceptions about who they’re fighting next to,” Jeffries says.

As the fighting dragged on, ugly statistics revealed how African Americans were being disproportionately affected by the war. Robert McNamara’s Project 100,000, implemented in 1966, pulled hundreds of thousands of poor men into the war—40% of them African American. By the following year, Black soldiers made up 16.3% of those drafted and 23% of Vietnam combat troops, despite accounting for only roughly 11% of the civilian population.

These new draftees often had little understanding of the war’s purpose and were increasingly disenchanted by their role in it. For many soldiers, a major tipping point happened when Martin Luther King, Jr. was assassinated in 1968, news of which reaches the soldiers in Da 5 Bloods during one particularly stirring scene—and in response, white soldiers burned crosses at Cam Ranh Bay and flew confederate flags at Danang. “Things fell apart rapidly,” Harry Humphries, a veteran who served as a military advisor on Da 5 Bloods, recalls. Fights between Black and white soldiers broke out across the country. At Long Binh Jail, a military prison where more than 50% of the incarcerated men were Black, prisoners overthrew the guards and destroyed many of the buildings. In 1970, the Marine Corps alone reported 1,060 violent racial incidents.

In 1969, TIME Magazine correspondent Wallace Terry conducted a survey of 400 Black soldiers on the ground and found that 60% of them believed that Black people should not fight in Vietnam because of inequality in the U.S. Terry quoted one soldier as saying, “Why should I come over here when some of the South Vietnamese live better than my people?… We have enough problems fighting white people back home.”

Janice Terry, Wallace Terry’s wife, tells TIME that during the course of her husband’s reporting, he ran into extreme resistance from the military. “The officers didn’t like it at all,” she says. “At one point, he felt like his life was in danger because of this.” Janice would often visit her husband at army camps and remembers seeing Confederate flags strewn from barracks and trucks. “You’re in a war, and some idiots are flying the Confederate flag,” she says. “That made Black soldiers so angry.” (Wallace Terry, who died in 2003, later wrote Bloods, an oral history of Black Vietnam soldiers, which heavily influenced Da 5 Bloods.)

Londia Granger Wright joined the Navy in the mid-’70s, and served as a chaplain’s assistant in Guam supporting Vietnamese refugees. Her late husband George Wright, a Marine sergeant major, had also fought in the war. Londia says that they both experienced racism while serving, including when a pilot told her that “I should not have been allowed to be in the Navy and that I needed to go back to where I came from.” But Wright says that her husband rarely discussed this aspect of his experience with her. “I think the memories were too painful,” she says. “When we’d watch military Hollywood films, he would shake his head and laugh and turn them off, because he said they were so wrong.”

‘The counselors didn’t have time’

In the early ’70s, the U.S. limped out of the war and began sending its troops back home to a country that was, in many ways, unrecognizable. Fashion, movies and music had changed; Black uprisings had occurred in cities from Detroit to Baltimore; activists like Angela Davis and writers like Toni Morrison were forging incendiary new forms of rhetoric. “There was a culture shock. I felt like I was in a sci-fi movie,” Felton says.

And race relations were no better than when they had left. While Felton was recovering at Walter Reed Army Medical Center in Washington, D.C., a fight broke out between hobbled white and Black veterans over a Temptations record. Once he was discharged, things only worsened: “I’m being accosted by other Blacks, who are excoriating me because I served in a white man’s war. Then I tried to join one of the major service organizations, but the World War II veterans turned us back, because they said we had not fought in a real war,” he remembers.

Posttraumatic stress disorder, which had not yet been recognized by medical institutions, occurred in Black communities at a disproportionately high rate, according to a 1990 study. Delroy Lindo’s character in Da 5 Bloods, Paul, reflects the toll of decades of untreated PTSD. A 1972 study found that Black veterans were over twice as likely as white veterans to not be employed full-time, and were struggling to find jobs that would support them beyond manual labor.

When desperate veterans turned to the U.S. Department of Veterans Affairs for help, many were denied basic disability claims. “White counterparts got their same kinds of needs fulfilled—but when Blacks went to get their benefits, the counselors didn’t have time for them,” Job Mashariki, a veteran, says. “It got to the point where they just said, ‘Whatever I’m suffering with, I’m going to continue to do that, instead of going to an institution that’s supposed to be servicing me but instead disrespects me.’”

Over the years, studies have found that the VA unlawfully turned away thousands of vulnerable veterans, while many have alleged that they discriminated against veterans of color. To fill the void, Mashariki co-founded the Black Veterans for Social Justice in 1979, which aimed to provide emotional, medical, and employment-based support. “We had to come together to empower ourselves,” he says.

More than two weeks after the police the killing of George Floyd, demonstrators and protesters continue to rally on the streets. These uprisings have shed light on widespread discrimination and racial inequality in the county—and the United States Military is no exception.

This week, the Senate appointed the very first Black military chief. Charles Brown Jr. was unanimously confirmed on June 9 as the Chief of Staff for the U.S. Air Force. Just a week before his confirmation, Brown posted a video in which he spoke about the killing of Floyd, the protests and his own experience with racial inequality as a member of the military.

Brown Jr. added that he rarely had a mentor that looked like him, and that he had to work twice as hard to overcome expectations. Though the demographics of active duty members in the military are diverse, there are only two senior officers who are Black, including Brown Jr.

Since the protests, the military has started to reckon with the ways in which it has propped up racist structures. It was only this week, for instance, that both the Navy and the Marine Corps banned the Confederate flag. And the Pentagon is considering renaming Army bases bearing the names of Confederate officers, though President Trump says he opposes the suggestion. “Times haven’t changed that much,” Mashariki says.

Mashariki hopes that the continuing protests, as well as Da 5 Bloods, will make people more aware of the plight suffered by men who are too often thought of as stoic, emotionless warriors. “There was a lot of anger and disenchantment with what had taken place: people were dealing with drug addiction, PTSD, the military spraying Agent Orange on our troops,” he says. “We needed support. We needed love.” 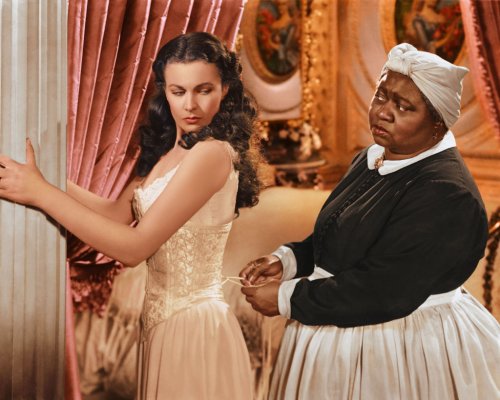 Film Scholars on Rewatching Gone With the Wind
Next Up: Editor's Pick