Philonise Floyd, the brother of George Floyd, spoke with emotion before the House Judiciary Committee Wednesday morning during a hearing on police brutality and racial profiling, urging lawmakers to ensure the death of his brother prompts meaningful change.

“I couldn’t take care of George the day he was killed, but maybe by speaking with you today, I can help make sure that his death isn’t in vain,” said Floyd, who laid his older brother to rest just one day earlier in Houston. “To make sure that he is more than another face on a T-shirt. More than another name on a list that won’t stop growing.”

The aim of the hearing is to “examine the crisis of racial profiling, police brutality and lost trust between police departments and the communities they serve,” according to a statement from the House Judiciary Committee. Eleven other witnesses were also expected to testify on police reform.

As protests calling for an end to police brutality continue to rage across the United States and around the world, Floyd spoke before Congress about the emotional impact of losing George, and of watching the video that showed his death after a Minneapolis police officer kneeled on his neck for more than eight minutes.

“I can’t tell you the kind of pain you feel when you watch something like that. When you watch your big brother, who you’ve looked up to your whole life, die. Die begging for your mom,” he said. “I’m tired of the pain I’m feeling now and I’m tired of the pain I feel every time another black person is killed for no reason. I’m here today to ask you to make it stop. Stop the pain. Stop us from being tired.”

George “didn’t deserve to die over twenty dollars,” Floyd said, referring to the claim that police were called because a man allegedly used a counterfeit $20 bill at a convenience store. “I am asking you, is that what a black man’s life is worth?” he said. “Twenty dollars? This is 2020. Enough is enough.”

Among witnesses called forth by Republicans on the committee was Angela Underwood Jacobs, whose brother, federal security guard David Underwood, was killed during protests in Oakland last month. Underwood Jacobs spoke against the growing movement to defund police departments.

“Police brutality of any kind must not be condoned. However, it is blatantly wrong to create an excuse, out of discrimination and disparity, to loot and burn our communities to kill our officers of the law,” she said, adding, “My wish is for us to live without fear and discrimination.” 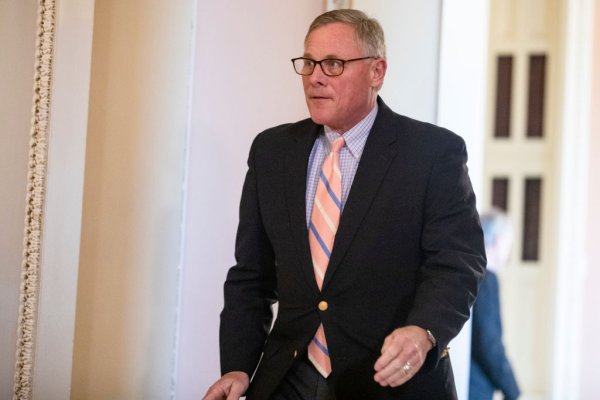 Senator Burr Under Scrutiny for Stock Sales
Next Up: Editor's Pick