Racism Is Surging in Germany. Tens of Thousands Are Taking to the Streets to Call for Justice

By Billy Perrigo and Mélissa Godin

Tens of thousands of anti-racism protesters took to the streets in cities across Germany this weekend, in what may be the largest demonstrator turnout outside of the United States.

In Berlin, organizers expected 1,500 people to show up. Instead, an estimated 15,000 protested in Alexanderplatz, Berlin’s city center, with signs that read “Germany is not innocent” and “Black Lives Matter,” German media outlet DW reported. Demonstrators held a moment of silence that lasted eight minutes and 46 seconds, the amount of time the former Minneapolis police officer Derek Chauvin kneeled on George Floyd’s neck.

But the protests extended far beyond Berlin, with rallies organized in nine other cities across the country. Munich saw a crowd of at least 20,000 people and 14,000 people rallied in Hamburg. Even German football teams—including Werder Bremen, Wolfsburg, Borussia Dortmund and Hertha Berlin—kneeled in solidarity with the Black Lives Matter Protests.

But protesters in Germany are not simply expressing outrage at police violence and racial discrimination happening in the United States, they’re calling it out in their own backyard. Here’s what to know:

How big a problem is racism and police brutality in Germany?

A United Nations (UN) group that visited Germany in 2017 concluded that there are systemic problems with racism and an “incomplete understanding of history” throughout the country. They found that institutional racism is entrenched within police institutions. “The repeated denial that racial profiling exists in Germany by police authorities and the lack of an independent complaint mechanism at [the] federal and state level fosters impunity,” Ricardo Sunga, the head of the UN group, said in a statement.

Institutional racism among police officers has been noted especially in the eastern state of Saxony, where in 2016, a video surfaced of officers from the region violently dragging a refugee out of a bus. Police racism in the region prompted Martin Dulig, Saxony leader of the Social Democratic Party(SPD)at the time to ask “if sympathies for Pegida[an anti-Islam movement] and the AfD [the far-right Alternative for Germany party] are more widespread in the police than among normal citizens.”

Despite the UN sounding the alarm bell in 2016, the problem did not improve—it got worse. The number of reported cases of racial discrimination significantly increased in Germany, rising by 59% between 2016 and 2019, according to an annual report presented on Tuesday by the German Federal Anti-Discrimination Agency (ADS). In January, the office of Germany’s only sitting African-born lawmaker, Karamba Diaby, was riddled with bullet holes. Diaby later reported receiving death threats from neo-Nazi groups. Bernhard Franke, the head of ADS said Germany has an “ongoing problem with racial discrimination and does not give enough consistent legal support to victims,” noting that “discrimination wears people down.”

But the true extent of Germany’s racism problem remains unknown. The country does not collect data on race and ethnicity, meaning that officials do not know exactly how many of their residents and citizens are people of color or the full extent to which these populations face poorer health, social, and economic outcomes. While the UN group encouraged Germany in 2017 to collect data on ethnicity in order to better identify and address systemic racism, this data has not yet been collected.

How do these protests fit with Germany’s history?

Germany takes great pains to educate its young people about its Nazi past, but less attention is paid to the country’s earlier history as an imperial power. In the late nineteenth century the German empire solidified its hold over several colonies in Africa. Between 1904 and 1908, an estimated 90,000 people were killed by the German Empire in what has been described as the first genocide of the twentieth century, in what is now Namibia.

Aminata Touré, a black state lawmaker from the German Green Party, says this part of German history has been selectively forgotten, allowing anti-black racism to persist in Germany even as it remembers its Nazi past. “I realized many many years ago that this is a problem we have in Germany, that there is racism here,” Touré, who spoke at a protest in Schleswig Holstein on June 6, told TIME over the phone. “I think we are very good at remembering the Holocaust and it’s important that we have this in our school system, but the problem is that we do not talk about the time that we were colonizing African countries,” she said. “A lot of anti-black racism was created at this time. There is little awareness about this problem. There are a lot of people who literally don’t know Germany has such a history, or that we’ve been part of this.”

The legacy of World War II also plays a part, says Charles Huber, a former lawmaker for the Christian Democratic Union who was one of the first two Black people elected to the German parliament. “Most people [on the extremes] say they are not [Nazis], because it is not appropriate. But that does not mean they do not think and act, consciously or unconsciously, under the same mechanisms.”

There have been several deaths of black people in Germany, including in police custody and as a result of attacks by rightwing Neo-Nazis, that speak to systemic problems, Touré says. In 2001, Achidi John, an asylum-seeker from Cameroon died after officers forced him to take emetics, a drug that induces vomiting, while in custody. In 2005, Oury Jalloh, an asylum-seeker from Sierra Leone burned to death in a police cell in Dessau. Police were charged in his murder but acquitted because of a lack of evidence. “These incidents showed that we didn’t even look at our own institutions, we didn’t even look to the right place to find out where the problem could be,” Touré says.

With the protests over the weekend, however, Touré is optimistic something is changing. “We are at the very beginning in Germany, talking about all these things with the majority. The minority, those concerned about racism, have been talking for decades. The majority have not. But this is something that has changed in recent days and weeks. We are having another discussion and I think we are moving the right way.”

How have German politicians responded to the protests?

Since the protests began on June 6, Chancellor Angela Merkel has supported demonstrators while reminding them to respect social distancing rules. “It is good if people take to the streets in Germany as well with a clear statement against racism,” Merkel’s spokesman, Steffen Seibert, said Monday.

Federal Interior Ministry spokesman Steve Alter, however, denied that racial profiling is a systemic problem in Germany at a press conference earlier this week, arguing rather that there are individual cases that are “taken seriously and included in the structural reappraisal.”

On June 4, Berlin became the first German state to pass an anti-discrimination law that prohibits all state authorities, including police officers, from discriminating against people on the basis of their race, gender, ability level, beliefs, age or sexual orientation. The law, which was in the works before the death of George Floyd, entitles victims to damages and compensation if they are discriminated against.

A quote by Charles Huber was updated to make it clear he was referring specifically to extremists, and not Germans in general.

Most Popular on TIME
1
‘You Bet Your Ass I've Got Regrets.’ As Election Day Nears, More of Trump’s Former Officials Are Speaking Out Against Him
2
Everything You Need to Know About Nurse Ratched Before Watching the New Netflix Show
3
Australian Man Dies Eight Years After Swallowing Slug 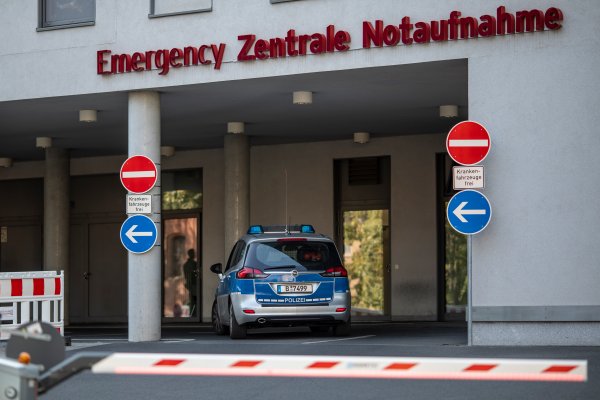