If you’ve been going to sleep recently to the deafening roar of fireworks, you’re not alone. From New York to Los Angeles to Hartford, Conn., complaints and reports about fireworks have ballooned over the last month. Boston police, for example, recorded 1,445 fireworks complaints in the first week of June, compared with 22 in the same week last year, according to the Boston Herald.

But just because fireworks usage is skyrocketing doesn’t mean that its industry is thriving. For the companies that sell smaller consumer fireworks, this enormous uptick is simply allowing them to get back on track after multiple months of no sales. Meanwhile, the companies that put on huge displays have been decimated by the cancellation of virtually all major events, from baseball games to concerts to parades. And because these companies rely disproportionately on July 4th shows, the widespread cancellation of Independence Day celebrations has left many wondering if they will make it to New Year’s without federal intervention.

“It was hard to keep track of the cancellations”

Until March 2020, it was a very good time to be in the fireworks business in America. In 2019, revenue hit $1.4 billion, according to research gathered by the American Pyrotechnics Association. Three quarters of that came from retail fireworks—like sparklers, snaps and Roman candles—that can be bought by consumers and set off in backyards (and all too often, in the street).

Retailers that sell those types of smaller fireworks have been buoyed by a widespread relaxation of state laws over the last few decades. Since 2000, 17 states have liberalized their fireworks laws, with Massachusetts the lone state that completely prohibits people from owning and using them. Store owners like Anthony LoBianco of Intergalactic Fireworks in Langhorne, Penn. have seen their business expand, with more and more people putting on backyard shows or elaborate gender reveal parties.

The remaining quarter of the fireworks industry is the sale of display fireworks: the monumental, intricately-choreographed shows you might see at a parade or an Independence Day celebration. Display companies have seen enormous recent growth due to a rising economy and the booming live event business, in which food and music festivals have sprouted up all over the nation. Pyrotechnic technology is also constantly improving, spurring increasingly lavish and jaw-dropping spectacles with all sorts of whimsical shapes and deft color mutations. “Over the last decade, we tripled the size of our operation,” Stephen Vitale, who runs the company Pyrotecnico in New Castle, Penn., says.

Pyrotecnico, which has existed since 1889, previously supplied and staged the fireworks for Super Bowl halftime shows and Democratic National Conventions, and was projecting 2020 to be its best year on record. But in March, as COVID-19 emerged as a serious threat to public health, his clients started cancelling one by one. “Coachella cancelled. Live Nation announced no more concerts. The MLB, the NBA, the NCAA Final Four: It was hard to keep track of the cancellations,” Vitale says. (New York City Mayor Bill de Blasio has said that the famed Macy’s Fourth of July fireworks show, the biggest pyrotechnic celebration in the U.S., will go on despite the coronavirus).

Companies like Pyrotecnico might have been able to weather a few months of silent skies, provided that the country was back up and running for July 4th. Typically, Pyrotecnico puts on more than 600 shows for Independence Day, accounting for more than 50% of their yearly fireworks revenue. But at the moment, less than a third of those shows will happen. He says that as as a result, he’s had to lay off 65% of his workforce.

Jim Souza, of the California-based Pyro Spectaculars, says that of the 400 shows the company was going to stage on July 4th, they’re currently looking at 40 and decreasing—and that the company is down 90% in revenue. “I say that with stomach pains,” he says. He had to put 25 people on furlough before Payroll Protection Program funds arrived.

In New England, Atlas PyroVision Entertainment Group had booked about 235 shows for July 4th, including for the cities of Boston, Plymouth and Hartford. “Right now, we’re looking to do about 18,” Steven Pelkey, the owner, says.

These cancellations’ negative effects will linger long after the first weekend in July. Production typically takes longer than a year: Ironically, the supply for these patriotic goods is shipped from China, and there are many safety regulations and protocols surrounding massive international shipments of explosives. For many companies, July 4th shipments have long already been ordered and are now sitting in warehouses around the country.

Given the state of the pandemic, there’s little hope for these companies to offload them in the foreseeable future. Souza was hoping to offset his July 4th dependence with a fireworks festival and competition, the Sparks Fly Festival, that was supposed to unfold over a week in October in Glendale, Ariz. “It was signed, sealed, delivered. We were about ready to launch the website and tickets,” Souza says. That was cancelled, too, leaving him with a bare schedule over the next ten months. “We have to find a way to stay in business until next April, when more deposits will be due and hopefully major league baseball starts,” he says.

The idle storage of fireworks could cost each company heavily, due the security and liability insurance that comes with protecting highly dangerous materials. Pelkey says he is sitting on $4 million of heavily insured inventory that will continue to burn a hole in his pockets until whenever shows resume. “That’s going to be tough to recover, because customers are not going to accept a 25 or 30 percent price increase,” he says.

And the product surplus could wreak havoc on the supply chain next year. “We are going to really face some headwinds going into next season because we have high inventory levels now, and there will be less orders going into 2021,” Vitale says. “That’s going to destabilize a very fragile industry within China.”

A Tale of Two Cities

As the display side of the industry sees red, the consumer side has fared better, perhaps in part due to the former’s plight. “We’re experiencing a tale of two cities,” Heckman says. “The display side is on life support, but it’s been quite surprising to see this early activity on the retail side.”

In early June, the Florida-based Fireworks Lady & Co. created a marketing campaign highlighting the fact that most displays would be cancelled for the year. “We’re sorry we have to do that to our brothers and sisters in the industry, but that’s what we’re doing,” Patricia Taime, who runs the company, says. Since then, business has taken off, to the point that Taime had to hire nine extra employees to deal with the influx. “It’s been very nice,” she says. “We’ve been dealing with more and more inquires, and working some extra hours.”

Anthony LoBianco, who runs Intergalactic Fireworks in Pennsylvania, has seen a dramatic increase in sales since reopening after being closed for two-and-a-half months. “Usually there’s one week before July 4th where it’s like a mad rush,” he says. “But that level of activity is happening now. Everyone is buying radically: they’re bored, and they have nothing to do at night. Fireworks fill in that little void instead of sitting at home and watching TV.”

Pelkey says that since Memorial Day, Atlas PyroVision’s retail stores in New Hampshire are up 40 percent compared to the same time frame last year. “For the most part, people don’t have anything to spend their money as far as entertainment,” he says. “They’re going to do what they can do.”

Still, this increase in interest is barely making up for the months of lost revenue. Many stores are holding their breath to see if the activity sustains through the crucial July 4th weekend. “We don’t know if people are just buying early for the holiday,” Pelkey says.

And while sales have increased, store owners are growing concerned about the ways in which fireworks are being used once they leave the store. Over the last month, fireworks have been weaponized at demonstrations across the country. And several municipalities that have banned fireworks, including New York City, have seen a rash in illegal usage. “It weighs heavily on us,” Pelkey says. “If products get used in a manner that is not consistent with their safe use and intent, you could have state fire marshals or even governors not allowing them.”

“All we can do stress the safety of their usage and the laws until we’re blue in the face,” LoBianco says.

If fireworks continue be used in an illegal manner, that could inadvertently result in continued financial strife for the entire fireworks industry—if further restrictions are imposed, or if municipalities with planned July 4th celebrations rethink the idea of setting off bomb-like bursts over communities. The American Pyrotechnics Association is asking Congress for $175 million in loans for roughly 150 small businesses, as part of the next stimulus package.

If many of these businesses go under, it may be hard to replace them: the fireworks industry is riddled with complicated regulations, making the barrier to entry extremely high. “I think the industry is going to be crippled,” Vitale, of Pyrotecnico, says.

Assuming that America starts to emerge from the pandemic, Pelkey expects cities and towns to want joyous firework displays next July 4 or the year after. COVID-19’s economic damage, however, could complicate these plans. “For a few years, some of them are not going to be able to have a display,” he says, “because there just won’t be enough of us around.” 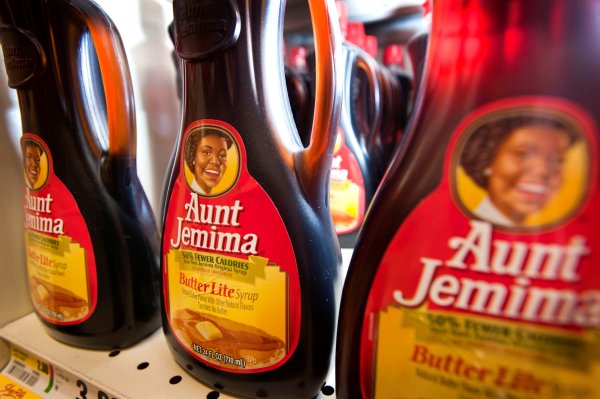 Quaker Oats: Aunt Jemima Brand 'Based on a Racial Stereotype'
Next Up: Editor's Pick