How Fireworks Became a Fourth of July Tradition

Fireworks in Boston on July 4, 2016.
Boston Globe—Getty Images
By Olivia B. Waxman

While fireworks may seem like a very American tradition, especially on the Fourth of July, their origins go back centuries before the first Independence Day fireworks display in Philadelphia in 1777.

The earliest forms of such pyrotechnics can be traced to around 2,000 years ago in China. During the Han Dynasty in 200 B.C., people are said to have roasted bamboo stalks until they would turn black and sizzle, and the air inside the hollow stalks would explode. “Baozhu” is a Mandarin word for firecracker that translates directly to “exploding bamboo.”

Chinese history experts say that at some point between 600 A.D. and 900 A.D., Chinese alchemists took that idea to the next level by filling bamboo shoots with gunpowder made from saltpeter (potassium nitrate, sulfur, and carbon acquired from charcoal), and throwing them into a fire pit. Steel dust or cast-iron shavings were added to make them sparkle. Another recipe for Chinese fireworks published by the Paris Academy of Sciences in the 18th century reported that “Chinese fire was made by crushing old iron pots and scraps into sand and adding the sand to gunpowder.” These firecrackers were often used during New Year Festivals and weddings to scare off evil spirits.

As the ingredients for gunpowder spread to the West after the Silk Road opened up trade and the Mongols made their way to Europe in the 13th century, so did fireworks, according to Simon Werritt, a science historian and author of Fireworks: Pyrotechnic Arts and Sciences in European History. They became a part of official celebrations, from the annual “Girandola” fireworks display at the Castello Sant’Angelo in Rome to the 1533 coronation of Anne Boleyn as Queen of England.

So it was no surprise that, as soon as July Fourth began to be celebrated as America’s Independence Day, fireworks were part of the plan.

After all, John Adams did say he hoped the anniversary of independence would be marked for years to come by “guns” and “bonfires” and “illuminations.” Because the first July 4 fireworks display happened in the middle of the Revolutionary War, some historians believe they were supposed to be a “morale booster.” The celebrations at the time would have also included the firing of cannons and guns, adding to the explosive nature of the festivities. With the war’s end and increasing concern for public safety, those firearms were eventually phased out of the celebrations and replaced almost entirely by the fireworks, which were often given the official stamp of approval in the hope of drawing citizens to public celebrations instead of more dangerous private firework shows.

Today, though fireworks are now a well-established July 4 tradition, they’ve still retained some link to their origins: in 2016, according to the U.S. Census Bureau, $296.2 million worth of fireworks were imported to the U.S. from China. 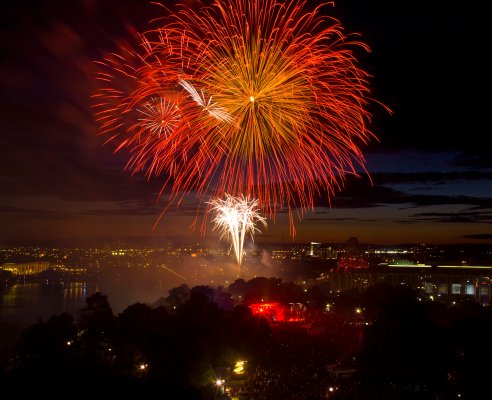 Why Canada Day Is Not the Same as Canadian Independence Day
Next Up: Editor's Pick