'A War of Words.' Why Describing the George Floyd Protests as 'Riots' Is So Loaded

As unrest has continued day after day and in town after town in the wake of George Floyd’s killing, a secondary skirmish has emerged: deciding how to describe what’s happening.

In speeches and newsrooms and social media posts, people have had to make choices about how to characterize widespread, evolving unrest. Are cities in the midst of uprisings? Rebellions? Riots?

“There’s kind of a war of words as to how we should understand what they’re doing,” says Heather Ann Thompson, a professor of history and Afro-American studies at the University of Michigan. Each term sends a vastly different message about precisely what is going on in America’s streets and why.

During his short speech in the Rose Garden on June 1, President Trump used some form of the word riot five times. And he’s not alone. At TIME’s request, the Oxford English Dictionary analyzed its corpus – including roughly 2,800 articles published between May 26 and June 2 – related to events that were spurred by the killing of George Floyd, to see how those events were being described in the media.

Legal and historical experts say that the word riot is a loaded one: While it aptly describes some events that have unfolded during the past two weeks, using it risks eclipsing the full picture by zooming in on a small, sensational slice of the action.

“Riot suggests pandemonium,” says john a. powell, a professor of law and African American studies at the University of California, Berkeley (who does not capitalize his name in recognition of its being a slave name). “What’s happening across the country and across the world is a call for justice, a call for police accountability, for the recognition that black lives matter too,” powell says. “Rioting detracts from all of that.”

In general, the word riot connotes meaningless violence – drunken sports fans, frenzied consumers, people have lost touch with reason and given into baser instincts. But it also has a racial dimension in the U.S., as a term that’s long been used (by white people) to drum up the image of black people wreaking senseless chaos in cities.

In the 1960s, when unrest erupted in black communities across the country, from Watts to Newark, the word riot was almost uniformly used in mass media to describe what was happening, historians say. “It was meant to just capture this sense of chaos, doom, the fact that the country was coming apart at the seams,” says powell. The events were violent, yielding hundreds of razed buildings and arrests and injuries. But the word helped to eclipse the political dimension of what was going on, the socioeconomic disparities that preceded the upheaval. It sidelined the fact that some businesses that were burned down were ones where owners mistreated black people.

Since that time, the word riot “has become fraught with these racial undertones,” says Angela Flournoy, an author who has written about the language used to describe unrest in Watts in 1965. “There’s an assumption that there’s a population that doesn’t know how to react reasonably to grievances, so this is what they do instead, which is, of course, racist,” she says.

In her work, Flournoy references a Los Angeles Times article from 1965. “The rioters were burning the city now,” it reads, “as the insane sometimes mutilate themselves.”

“For those who wish this would all go away,” says University of Michigan’s Thompson, riot might seem like just the word they’re looking for. “They would rather focus on the minority incidents where things have gotten particularly chaotic,” she says, “as a way to dismiss it.” People have looted stores and broken windows and set fires. But the vast majority of protests have been peaceful.

Compared to riot, a word like uprising or rebellion does more to suggest a struggle for justice, a warranted response to oppression, an attempt to demand change outside a system that has failed to yield it. Labeling the George Floyd protests as riots capitalizes on the fact that “people have an easier time digesting frames of black criminality than black freedom,” says Nikki Jones, a professor of African American Studies at Berkeley. It helps push away the notion that a passive observer might be complicit in anything by being passive. It also gives cover to those who might use harsh tactics to bring the unrest to an end.

In his speech, Trump referenced peaceful protesters but suggested that America was in the grips of an “angry mob.” He cast the people in the streets as “looters, criminals, rioters” who were committing “acts of domestic terror” and vowed to bring “law and order.”

“Law and order” is coded in its own way, of course. The language used to describe actions that police might take in response to protest – even indiscriminate ones like firing rubber bullets into a crowd – is often cast as “imposing order,” notes Thompson. The implicit logic is that rioting is always disorder, she says, and so whatever is done in response to it must be the opposite.

powell, for one, prefers the word demonstration, in part because the right to demonstrate is assured in the Constitution. (That word has also been commonly used in the mainstream media.) Jones says she is drawn to uprising. “I want people to think about the freedom struggle people are engaged in in this moment and the ones that they’re connected to in the past,” she says.

Elizabeth Hinton, an associate professor of history and African American studies at Harvard, says uprising “really captures the fact that the violence that emerges during these incidents isn’t meaningless, that it is a political expression, and it is communicating a certain set of demands.”

Hinton also sees sense in the word rebellion, a term that has become favored by some in academia to describe the violent events that unfolded in the 1960s. Many of those who took to the streets in Detroit in 1967, in one of the largest instances of civil disorder, called it the Great Rebellion, she says, “because they were rebelling against institutions that had excluded them for so long and demanding greater socioeconomic inclusion.”

A key factor is how participants themselves understand their actions, now as then. “I try to defer to the people who were there,” says Flournoy, who wrote about the events in Detroit in her novel The Turner House. “They’re the ones who decide what those things are called.” Whatever consensus comes up from those who are in the streets today, she says, “I hope people defer to them.”

The original version of this story misstated the time period during which the articles analyzed by the Oxford English Dictionary were published. They were published between May and June, not March and June. 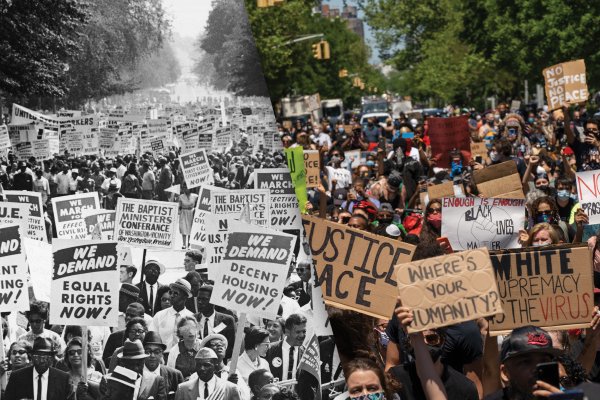 The History That Came Before the George Floyd Protests
Next Up: Editor's Pick