Protests Instead of Graduation, the Class of 2020 'Walk the Stage of the Streets'

Lee Younger, 18, wore his bright orange graduation gown and his father’s dashiki, an embroidered garment with West African roots, to pay his respects at George Floyd’s memorial, just a mile from his parents’ house in Minneapolis. Datelle Straub, 18, carried his high school diploma as he marched through Minneapolis, wearing his red graduation cap and gown. Louis Michael, 22, who recently earned his bachelors from MidAmerica Nazarene University, wore his dark blue graduation outfit over a black lives matter t-shirt at a protest in Oakland, California.

All recent graduates, it was also their first time participating in an act of protest. Though they don’t know each other, Younger, Straub and Michael all decided to wear their cap and gown in a similar act of defiance among this week’s groundswell of national outrage, as protests across the country have broken out in states including New York, California, Tennessee and Colorado. “We put our cap and gown on to show that there’s black excellence in the community,” said Straub, who grew up in Minneapolis.

Straub, whose graduation ceremony was canceled due to Covid-19, was driven by his mother to the protest. Instead, he listened to his graduation streaming on his phone, and as the names of 2020 seniors were listed, he marched.

“I made the best of it. We didn’t get our school stage, but we got to walk the stage of the streets.”

In the last few weeks, they have seen their plans after graduation evaporate due to Covid-19, lost friends and family members to the virus, and their city become the epicenter of a national uprising. Yet they are hopeful, they say. “What are the police scared of most? They’re scared of black educated black men,” said Younger, who hopes to save enough money this summer to move to California and become a comedian. Michael, who started a GoFundMe to support his education, also hoped to inspire others to attend protests wearing outfits that “will change the narrative” of how black men are often portrayed.

In this video, Younger and Straub said they plan to encourage other members of the class of 2020 to join them in this form of peaceful protest.

“We’re thinking of getting more people out, and really showing [the police], it isn’t okay to aim your guns at kids of the future.” 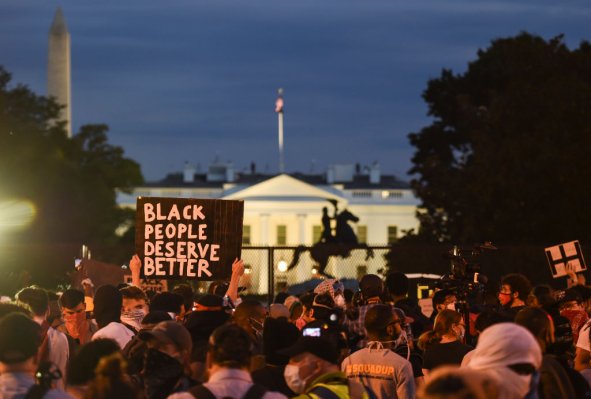 D.C. Protesters Say Trump Galvanizing Their Cause
Next Up: Editor's Pick