In the blocks surrounding the White House on Tuesday, evidence of violence from the previous days of riots littered the streets: shattered windows, rubber bullets, melted remnants of burnt cars. Washington D.C.’s curfew expired in early morning, but as the sun rose, all signs pointed to a city bracing for another day of conflict.

Those who hadn’t already boarded up their business fronts were doing so, as if preparing for a hurricane. Spray paint was getting washed off walls, but one Secret Service agent wondered as he watched whether it would help, when there was likely more to come. People dropped off cases of water and snacks for protesters, who were gathering peacefully as military vehicles and troops armed with riot gear paraded through downtown as if patrolling a war zone.

If the curfews and crackdowns were meant to lower the intensity of the protests in the wake of George Floyd’s death, they’ve had the opposite effect in the U.S. capital. A day after the White House deployed federal forces to clear out protesters so President Donald Trump could walk to a nearby church for a photo op, roughly twice the number of demonstrators had reconvened by the early afternoon in Lafayette Square — not on it, because a high fence had been erected around it —than had been there the day before.

Many said Trump’s political theater and the brutal treatment of peaceful protesters the previous day was just the latest in a long pattern of action by the President that was uniting them in their cause.

“I saw Trump’s speech on TV last night and he stood in front of this church and held up a Bible and acted like that would fix everything, and it just made it worse to me,” said Celete Kato, a Washington resident, as cars driving by Lafayette Square honked in support. She said Trump is actually “galvanizing this Black Lives Matter voice to want to do better and be better and respond in a more coordinated way. So maybe he’s helping the cause.”

Though there have been organized demonstrations across the nation since George Floyd was killed in police custody on May 25, many in the crowd of protesters outside the White House on Tuesday appeared to have come spontaneously and on their own. They came whenever they could, and however they could, to show their support. On Capitol Hill, one group of young adults wandered the complex looking for a protest to join; there were none at that particular time, so they headed toward the White House.

One woman, Tia Smith, from Springfield, Missouri, drove more than 1,000 miles to be in Washington for the protests. She had never attended one before this week. “I just love my people. I want to support them. Even with everything going on, I still feel there needs to be a voice, and I am all here for it,” Smith said. “I just hope things get better from here. I really do.”

Jennifer Jones, standing outside the White House around 8:30 a.m., had deviated from her normal morning running route to stop by the protest site for a quiet moment of prayer. Jones has been avoiding the protests because of concerns about coronavirus, but she was offended that Trump had used a Bible as a prop the day before. “I just wanted to come and see it for myself. I just want to remember this moment so that I can also really feel it for myself, so I can channel it in a positive way,” Jones said. “I’m encouraging everyone to channel their anger to the primaries and to the election in November.”

Over the past week, in D.C. and other cities around the country, peaceful protests over Floyd’s death during the day have been followed by violent riots and looting at night. On the one hand, some believe any violence detracts from the protest message of ending police brutality against black Americans. On the other, many don’t think the daytime protests would be getting as much attention without them. And others say they don’t blame the people who participate in the rioting at night: Hasn’t everyone spent enough time trying to convey the same message peacefully? Colin Kaepernick kneeling during the national anthem comes up a lot as the evidence. Look what happened to him.

As of Tuesday evening, social media posts showed that protesters had continued on past the city curfew of 7PM. At least during the day, it appeared they were largely peaceful. But in one discombobulated moment, it was clear how easy it was for the environment to turn.

Outside the park, people wearing masks chanted, holding signs with the names of police brutality victims and supportive messages like, “Riots are the voices of the unheard!” A lamp post with a bottle of Germ X taped onto it served as an ad hoc hand sanitizer stand, a reminder of the ongoing pandemic. Then, suddenly, police stormed out of the fence around the park and pulled a woman out of a grey BMW SUV she’d been sitting in for some time, pinning her to the ground. It was not immediately clear why.

The crowd erupted. Several people shouted, “Stop! She’s not resisting!” The police picked her up and took her behind the barricades. Protestors ran to that side of the fenceline and began chanting at police, as law enforcement officers also rushed to that end. “Hold the fence!” one of the law enforcement officers instructed the others, to prevent them all from consolidating in the same spot.

Jay Hamilton, a 45-year-old D.C. resident who was at the protest on Tuesday, thinks the heavy-handedness of the police has provoked the riots. “This is America, right? America’s all teams. So depending on the team that you’re on, that’s how you’re going to see [the riots]. For me, it’s not [detracting from the peaceful protests], it’s part of the protest,” he said.

He pointed to the gate around the park as an example of law enforcement provoking protesters into violence, arguing it was unnecessary to put it up. As he spoke, a line of troopers armed in riot gear moved through the protesters. People in the crowd jeered. “Why [do] they even send those guys down the block like that? That’s that bullshit right there.” 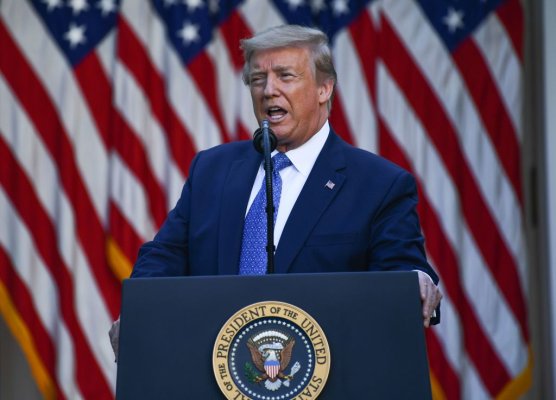 What Is the Insurrection Act And Does it Give Trump the Authority to Send Military Troops Into States? Here’s What To Know
Next Up: Editor's Pick