Demonstrators protest the killing of George Floyd near the city's 5th police precinct on May 30, 2020 in Minneapolis, Minnesota.
Scott Olson—Getty Images
By Sanya Mansoor

Government authorities, including President Trump, suggested Saturday that out-of-state agitators brought violence to this week’s tense protests over George Floyd’s death. However, a few officials have backed off of those early assertions and some of the arrest data suggest that might not be the case.

Floyd, a 46-year-old black man, died in Minneapolis, Minn., while detained by a white police officer over an alleged forgery. Cell phone footage shows Floyd was held face-down, handcuffed, with an officer’s knee on his neck, as he repeated that he “can’t breathe.” On Friday, the officer who knelt on Floyd’s neck, Derek Chauvin, was arrested and charged with third-degree murder and manslaughter. Ever since video of Floyd’s death went viral, protests have widely spread across the country, with some ending in looting, property damage and violence.

Minnesota Gov. Tim Walz said in a press conference Saturday that he believes that 20% of Minnesotans and 80% from outside the state are responsible for inflicting the worst damage on Minneapolis, calling it the “best estimate right now.” Mayors of Minneapolis and St. Paul backed up the governor’s initial statements.

“The people that are doing this are not Minneapolis residents,” said Minneapolis Mayor Jacob Frey. “They are coming in largely from outside of this city, outside of the region, to prey on everything we have built over the last several decades.”

“Every single person we arrested last night I’m told was from out of state,” St. Paul Mayor Melvin Carter had said. “Those folks who are agitating and inciting are taking advantage of the pain, of the hurt, of the frustration, of the anger of the very real and legitimate sadness that so many of our community members feel to advocate for the destruction of our communities.”

Since then, Carter walked back his statement in a press conference later on Saturday, saying that the information he relied on was inaccurate.

“This morning I shared with you arrest data received in my morning police briefing which I later learned to be inaccurate,” Carter said. “I have taken further steps to safeguard our ability to provide relevant and accurate information and will ensure that those steps are taken (…) in the future. (…) I take full responsibility for that.'”

In a press conference later on Saturday, Walz declined to stick by his estimate, according to KARE 11. The governor’s office did not immediately respond to a request to clarify what number of those responsible for unruly conduct were from out of state.

Additionally, local arrest data indicates that most of those arrested since Thursday have actually identified themselves as Minnesotans, as first reported by local station KARE 11’s Brandon Stahl and confirmed by TIME.

Jail records from the Hennepin County Sheriff’s Office, whose jurisdiction includes Minneapolis, show that of a total of 142 people were arrested for a variety of offenses from Friday through Sunday. As of Sunday morning, only about 21 of those 142 were noted as being from out-of-state. The jail log included individuals whose addresses were identified in neighboring states like Wisconsin, Illinois, North Dakota and Iowa, among others.

The sheriff’s office records do not specify whether individuals were arrested at the protests although an analysis of recent charges by KARE 11, specifically including rioting, unlawful assembly and burglary-related crimes, indicate that those arrested mostly list their address as in-state.

Of course, there are some caveats to this data, including whether people arrested are providing accurate addresses and that all cases may not yet have been processed by jails.

On Saturday, Donald Trump took up Walz’s claim that 80% of those doing damage to Minneapolis were from out of state, chiding local officials that they “must get MUCH tougher or the Federal Government will step in and do what has to be done.”

“[T]he voices of peaceful protest are being hijacked by violent radical elements,” Barr said without providing detailed evidence. “In many places, it appears the violence is planned, organized, and driven by anarchistic and far left extremists, using Antifa-like tactics, many of whom travel from out of state to promote the violence.” 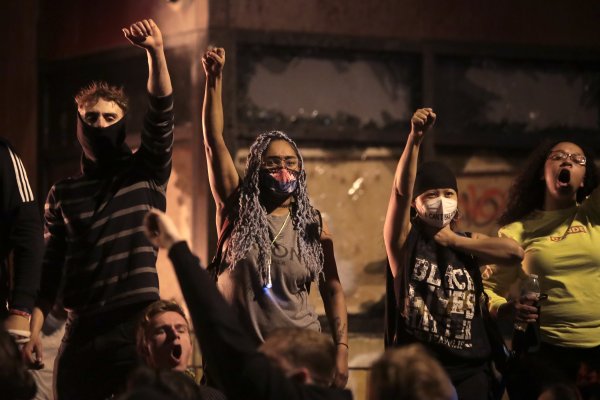 How Minneapolis Protesters Contend With COVID-19
Next Up: Editor's Pick