A woman in a protective mask shops as a line of shoppers stretch to the back of the store waiting to check-out at the Market Basket in Chelsea, Mass. on March 13, 2020.
Bill Greene—Boston Globe/Getty Images
By Abigail Abrams

Every time she has to buy groceries lately, Lily Marquez gets worried. She lives in a two-bedroom apartment in San Francisco with her two young children, her husband, her chronically ill mother-in-law, and her husband’s grandmother. Both of the older women are at high-risk of becoming severely ill if they get COVID-19, and she doesn’t want to be the one to infect them.

But while many Americans have switched to online grocery shopping to avoid crowded spaces during the ongoing coronavirus pandemic, that’s not an option for Marquez—or the millions of other low-income women and children who rely on the Special Supplemental Nutrition Program for Women, Infants and Children, better known as WIC. The federal program requires that WIC participants, or their designated proxies, complete their purchases in person, in front of a cashier.

“At Safeway, I went in and out because it was just literally chaotic,” Marquez says. “I’m like, there’s no way that I could do that because when I go out, I don’t take the kids so I have to leave the kids with the elderly and my husband is trying to work. So I’m trying to just be quick about it.”

Anti-hunger organizations and advocates for low-income families have been working toward making online grocery shopping possible for WIC families for years, and as the coronavirus spread this spring, those efforts accelerated. Federal lawmakers have backed the idea, and the U.S. Department of Agriculture has granted a number of waivers allowing state agencies to issue WIC benefits and conduct other operations remotely during the pandemic. But even as most states imposed stay-at-home orders this spring, the USDA hasn’t budged on the rule requiring beneficiaries to purchase their groceries in person, citing concerns about fraud.

Advocates aren’t buying it. “It’s an equity concern,” says Melissa Cannon, a senior policy advocate at California Food Policy Advocates who has been working on the issue. “It’s challenging for anyone to go to the grocery store right now, given that social distancing rules are in place. You might have to wait in line for a long period of time. Those challenges are heightened for any mom who’s going in with young children.”

On May 8, nearly 100 members of Congress, led by Michigan Rep. Andy Levin and Wisconsin Rep. Gwen Moore, wrote a letter to Food and Nutrition Service (FNS) Administrator Pam Miller, whose department oversees WIC, asking her to waive the requirement that participants enter their PIN or use vouchers in front of a cashier. Miller recently responded to Levin saying that “FNS is actively reviewing requests for waivers of the requirement that WIC transactions occur in the presence of a cashier in order to allow for a contactless transaction.”

Levin says he’s “very unhappy” about FNS’s failure to act. “I don’t understand what their rationale would be,” he said in an interview with TIME. “I mean, they almost act as if poor people, working class people, can’t be in the 21st century with others.”

The WIC program helps women who are pregnant, postpartum or breastfeeding and children up to age five. To qualify for the benefit, a family must be at or below 185% of the federal poverty level. Extensive data has now shown that low-income areas are being hit hard by the coronavirus pandemic, and Hispanic and black Americans, who make up a significant share of WIC participants, are getting sick at higher rates.

FNS officials did not answer specific questions TIME asked about online shopping access or when the agency might change the requirement that WIC participants complete purchases in front of a cashier. A spokesperson for the agency said that removing the requirement could have a “significant negative impact on program integrity.” In a statement to TIME, USDA Secretary Sonny Perdue said that “USDA is maximizing our services and flexibilities to ensure children and others who need food can get it during this Coronavirus epidemic.”

The National WIC Association, the nonprofit that works on education and advocacy around the federal program, has taken a leading role in pushing for online purchasing. As the pandemic exploded this spring, USDA allowed a growing number of states to enter a pilot program that allows SNAP recipients to use food stamps to shop online. WIC advocates argue that a similar switch could happen in the WIC program too. WIC transactions are more complicated than using food stamps since they require stores’ computer systems to recognize the food items that individual participants are allowed to buy, so there are some technological hurdles to work out. But advocates say it can be done.

“An administration that was proactive, recognizing the problems and consequences and risks, particularly to pregnant women, babies and young children, would have been on top of this and moved aggressively to allow maximum flexibility for participants in the program,” says Douglas Greenaway, president and CEO of the National WIC Association.

Instead, Greenaway’s organization has been coordinating its own working groups and holding meetings with state WIC agencies, retailers and other organizations for months, even as the USDA issued guidance again on May 11 reiterating that WIC purchases must be completed in front of a cashier.

In the meantime, FNS told TIME that administrators are working with states to explore other options. For example, current regulations allow WIC participants to place orders online, but they still must show up in person to complete their purchases. In theory, states could allow mothers to select food items online and then pay in person during a curbside pickup, or when they receive a delivery.

But Elisabet Eppes, the director of program innovation at the National WIC Association, says no such program currently exists. No retailers have the technology to accept WIC payments outside of their stores, she says, and they have very little financial motivation to update their systems. While regional grocery chains and some national retailers including Walmart, Target and Kroger are participating in the National WIC Association’s working group, progress is slow. With no federal approval for an online-purchasing program and WIC representing a fairly small customer base—there are just over six million WIC participants—Eppes says it has been tough to get big retailers excited about investing time and money in new technology.

Given that delay, some states are trying to submit requests that would allow for more limited changes to speed up the process. Minnesota, for example, requested on April 15 that FNS waive the cashier requirement so that WIC participants could purchase groceries over the phone and then pick them up curbside without entering a store. The state has not yet heard back from Washington, according to Minnesota WIC Director Kate Franken.

Still, advocates say, the fight rages on. The San Francisco-based mother, Marquez, said a recent shopping trip took much longer than it should have—she had to go to four different stores before finding one that was not too crowded. As California, like most states, has moved into a period of reopening, Marquez says she’s seen longer lines, and fewer shoppers adhering to precautions about mask-wearing and social distancing.

“It’s been crazy because I’ve been trying not to go out,” Marquez says. “I don’t want to lose the WIC benefits because, you know, we need it for now during this hard time. So now it’s just like, I wish they could transition to online because that’s less exposure right now during these crazy scary moments.”

The original version of this story misspelled the last name of the National WIC Association president and CEO. It is Greenaway, not Greenway. 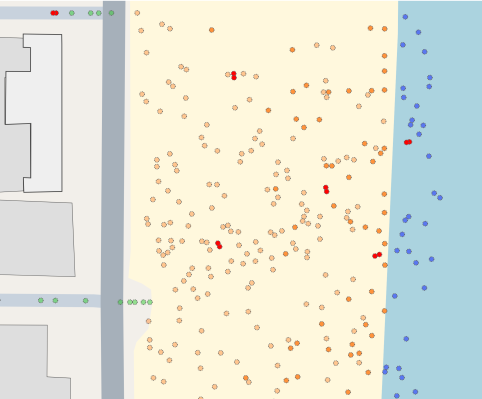 A Real-Time Simulation of Social Distancing at the Beach
Next Up: Editor's Pick