'The Saddest, Bitterest Thing of All.’ From the Great Depression to Today, a Long History of Food Destruction in the Face of Hunger

Tons of carrot dumped to rot by a local farmer in Ukraine on May 18, upon failing to sell it amid the ongoing COVID-19 pandemic, local villagers taking some of it for use as animal feed.
Pyotr Sivkov—TASS via Getty Images
By Suyin Haynes

Hunger is a powerful force in The Grapes of Wrath, John Steinbeck’s 1939 novel of the Great Depression, but so is the fertility of California’s landscape. The bounty of the harvest, tragically, does not translate into food for the workers — and in fact, with the economy having ravaged the chain of commerce, much of the food is destroyed rather than eaten.

“The works of the roots of the vines, of the trees, must be destroyed to keep up the price, and this is the saddest, bitterest thing of all,” Steinbeck wrote. “Carloads of oranges dumped on the ground…a million people hungry, needing the fruit — and kerosene sprayed over the golden mountains.”

Steinbeck’s observations were a depiction of reality: During the Great Depression, plummeting prices and adverse weather conditions resulted in a crisis for the U.S. farming industry and its stock. Government intervention in the early 1930s led to “emergency livestock reductions,” which saw hundreds of thousands of pigs and cattle killed, and crops destroyed as Steinbeck described, on the idea that less supply would lead to higher prices.

Now, as experts warn that the economic effects of the ongoing coronavirus pandemic could be comparable to the Great Depression in the U.S. and around the world, and as the International Monetary Fund predicts that the “Great Lockdown” could cause the worst recession since the 1930s, similar scenes of crop destruction have taken place, with reports of U.S. farmers having to make difficult choices to dump their milk, slaughter their livestock and smash their eggs. And around the world, COVID-19 has brought food supply chains to a standstill, as farmers in China have been unable to sell their produce at closed wet markets and unable to access animal feed; in the U.K. and Germany, there has been a shortage of workers to help with the spring harvest due to lockdown and self-isolation measures.

As advocates mark World Hunger Day on May 28, experts and officials around the world are hoping they can avoid adding mass hunger to the list of parallels many have seen between that period and today.

Tomato crop dumped in fields by farmers protesting against a lack of fair prices in the market, at Kharkhari Makhwan, on May 18, 2020 in Bhiwani, India.
Manoj Dhaka—Hindustan Times via Getty Images

The onset of the Great Depression after 1929 left many U.S. farmers in financial ruin as prices dropped and they were left with huge surpluses of stock; in California alone in 1932, farmers unable to shift their stock lost nearly 3 million watermelons and 22.4 million pounds of tomatoes to rot. Unemployment and poverty soared, not just in the U.S., but in much of Europe and in the U.K., where manufacturing took a major hit due to declining exports.

President Herbert Hoover, who downplayed the early impact of the Depression, said in 1931 that “no one is actually starving” — the same year makeshift breadlines popped up around New York City and were serving some 85,000 meals per day, according to historians Jane Ziegelman and Andrew Coe. Across the country, families restricted their diets, which caused health conditions that had consequences even into the interwar years, as prospective soldiers failed their physical examinations due to vitamin deficiency. In 1932 and 1933, both in the U.S. and farther afield in Canada and the U.K, a series of popular protests dubbed “hunger marches” drew attention to the plight of the unemployed.

After President Franklin D. Roosevelt took office in 1933, one part of his New Deal program to revive the American economy was to eliminate the surplus stock, and pay farmers a subsidy to do so. This policy became the Agricultural Adjustment Act of 1933 (AAA), and led to depressing scenes as farmers were forced to kill their pigs and burn their corn. Under the AAA, even as poverty soared, farmers could receive payment for not producing food. The government would also buy out livestock or harvests — to the tune of six million hogs nationwide — and kill or get rid of it. In Nebraska alone, the government bought hundreds of thousands of cattle and pigs. Millions of acres of cotton in the South were also plowed under. Similar levels of destruction happened in other countries; in Brazil between 1931 and 1934, more than a year’s global supply of coffee, totaling more than 28 million bags, was destroyed.

Then as now, people could see the bitter irony of the situation. “There is a failure here that topples all our success,” Steinbeck wrote. “And coroners must fill in the certificates — died of malnutrition — because the food must rot, must be forced to rot.”

The U.S. government wasn’t only asking farmers to destroy food; at the same time, it was also purchasing and distributing food to the hungry — but the idea of any such destruction was hard to stomach. “Although one hundred million pounds of pork were processed for relief purposes, the idea of waste, and stories about the bodies of little pigs floating down the Mississippi River continued for years,” writes historian C. Roger Lambert.

And while pork products, cheese, flour and butter were initially redistributed to unemployed families, there wasn’t a nationwide effort to redistribute food until later in the year, when criticism of the widespread waste became part of the public debate. In autumn 1933, Roosevelt provided $75 million to purchase agricultural products to feed the needy, and the government set up the Federal Surplus Relief Corporation (FSRC), which helped redistribute surplus food to the hungry.

Farmer Dave Burrier plants corn in the Marvin Chapel field in Mount Airy, Maryland on May 19, 2020. - Dave Burrier steered his tractor through a field, following a GPS map as he tried to plant as much corn as possible amid the yellow and green rye covering the ground. Striving to get a massive yield out of his crops in rural Maryland is how Burrier hopes to make it through yet another uncertain year, beset by market disruptions caused by the COVID-19 pandemic and renewed trade tensions between the United States and China.
Andrew Caballero-Reynolds—AFP via Getty Images

There were complexities and limits to the effectiveness of the AAA and the FSRC. The AAA benefited farmers by raising their incomes, and provided a framework for federal support for agriculture that lasted well beyond the Depression, as the Act was repeatedly revised and amended over a 60 year period. Some farmers at the time felt that the FSRC’s distribution efforts undermined the economics of the AAA, and — at a time when the idea of direct federal relief was still relatively new in the United States — the program was not a silver bullet for solving hunger. In retrospect, some historians have argued that the government ended up prioritizing agricultural demands rather than seeing a responsibility to feed the needy with surplus food. It was a persistent problem; in 1972, historian Lambert wrote that the whims of agricultural bureaucrats and rural congressmen were still consistently opposing “realistic efforts to resolve the paradox of ‘want in the midst of plenty.'”

More than three-quarters of a century later, as the world faces another hunger crisis, efforts are already underway to prevent food from going to waste the way it did back then. In April, the U.S. Department of Agriculture announced it was purchasing up to $3 billion in fresh produce, meat and dairy supplies from farmers to redistribute to the needy via relief organizations, and in New York, the state is working with dairy farmers and cheese and yogurt manufacturers to turn excess milk into other products rather than dumping it. Meanwhile, as TIME reported earlier this year, before the pandemic took hold in the U.S., American milk producers have been struggling due to declining demand, and increasing numbers of small family farms have filed for bankruptcy, but many in the struggling industry are looking for ways to keep their businesses afloat while also feeding those who need it.

The stakes couldn’t be higher. Earlier this week, the U.N.’s World Food Program’s Chief Economist Arif Husain told TIME that the world is facing an “unprecedented” food crisis due to the COVID-19 pandemic, with an estimated 265 million people projected to go hungry in 2020, adding a global dimension to the contrasting actions of farmers who are having to destroy their stocks. Husain warned that countries need to work together to protect those living in already vulnerable situations, and that agricultural sector workers need to be treated as key workers too.

Writing in the late 1930s, Steinbeck too observed the impact of hunger on the working class, and how the paradoxical waste of food destruction would enrage those on the brink of survival. In fact, the passage that gave the novel its title came after a description of burning corn and dumping potatoes in rivers: “In the eyes of the hungry there is a growing wrath. In the souls of the people the grapes of wrath are filling and growing heavy, growing heavy for the vintage.” 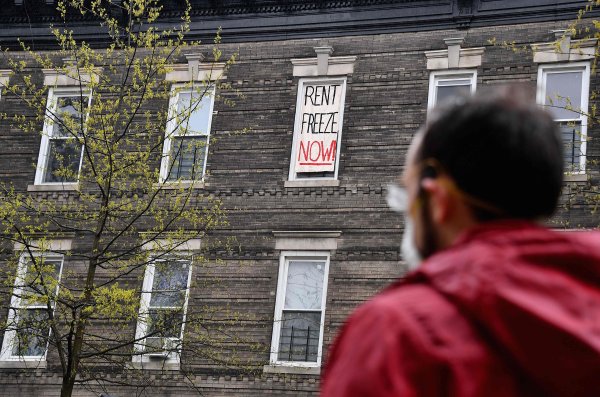 'How Am I Going To Make It?' Months of Eviction Uncertainty Are Taking a Toll on Millions of Families
EDIT POST