'Having an Effective Vaccine by the End of this Calendar Year Is Achievable.' NIH's Francis Collins on the Big Push

Dr. Francis Collins is a geneticist, former head of the Human Genome Project and the current director of the National Institutes of Health, the government agency primarily responsible for health research in the United States. In May, he joined the White House Coronavirus Taskforce. He also won the Templeton Prize, a $1.3 million prize for scientists who explore issues of faith. He talked to TIME about vaccine research, the World Health Organization, and whether evangelicals are more given to conspiracy theories.

Do you have a best guess for when we might have a vaccine for COVID-19?

Having an effective vaccine by the end of this calendar year is achievable. But let no one imagine that that’s a done deal. People say this is like going to the Moon, you just decide to do it. No. That was engineering. Those laws are pretty well worked out. We know how gravity and electronics work. We still don’t know enough about how the human body and the immune system and viruses and their biology work. So we are doing everything humanly possible to get that vaccine out there. But there are certain unknowns that we can’t ignore.

What were the driving factors in choosing the vaccines that the U.S. is focusing on?

The COVID-19 vaccines chosen for testing on a large scale this summer are those that have moved quickly enough to show evidence of producing a good immune response in a small number of volunteers. It was also important to invest in vaccines that used different scientific strategies, because this is a new virus, time is of the essence, and we want to be sure that we have the best possible chance of success for at least one of these vaccines. And finally, it was really important that the approaches being funded would be as safe as possible.

Are you worried when we get a vaccine that people will accept it?

I am worried. Naively, I thought if people actually saw a disease around them that was causing suffering and death of people they knew, that they would have a harder time resisting the idea that this could be our best hope as a nation. But I’m seeing stirrings that may not actually have that turn out to be true. We don’t at the moment have sort of an organized counter approach, but maybe we should start thinking about that. Talk about a terrible outcome here: suppose we are fortunate and by January of 2021 have three hundred million doses of vaccine to give to people in the U.S. and millions more in the rest of the world. And a significant proportion of the people, whose lives could be saved, decide they don’t want it, because of conspiracy theories and other false information. And as a result, we end up not achieving the kind of herd immunity that you need to keep this from coming back year after year. What a terrible tragedy for us, supposedly advanced society.

You have in past called yourself an Evangelical, but it seems in our current situation that the people pushing back at the need for such drastic actions to stop the spread of the coronavirus are also often people who would call themselves Evangelicals. Why do you think that is?

You will hear from the extreme views because they make news. But I actually think most believers don’t buy into the idea that this is a conspiracy, nor do they buy into the idea that you can ignore the public health recommendations. Those rare ones who do and assemble anyway, who say I don’t need no vaccine because I got Jesus, those are probably not representing the majority by far of people who both know that science is the best hope we’ve got in this crisis and also believe in God.

Why do you think the U.S. has not been able to manage the pandemic as well as other countries?

The U.S. is a big sprawling country, with people who have very strong opinions about who’s allowed to tell them what to do. And so even in circumstances where efforts were made early on to try to encourage people to take care about not distributing the virus by their own behavior, it took a while for that to click in. We’re not China. We don’t have an authoritarian government who can basically say now hear this. We are basically a sort of a bottom up public health system, not a top down. And we’re counting on the American public, now that they’ve had the information, to act accordingly.

Many states are opening up now. Too soon?

It depends. Every state is in a different situation. Every part of every state is in a different situation. Certainly in places where they have not had any cases of COVID-19 and where they’re doing adequate testing to be able to say it’s really not out there in their community, the idea of beginning to open up makes sense because this is causing great economic stress and suffering for people. On the other hand, if you’re in a circumstance like where I am right now in the outskirts of Washington D.C. where this epidemic is still going strong, it would be quite dangerous to decide to simply open up and hope for the best.

You recently won the $1.3 million Templeton Prize, which is given for “celebrating scientific and spiritual curiosity.” What does that mean?

John Templeton started this prize because he was interested in how in a modern world spirituality could still be significant in the lives of people and be a contributor to the enrichment of their experience. I assume that the selection this year was based upon the fact that I have been very outspoken about the harmony that I see between science and faith.

In money the Templeton is worth more than the Nobel, but it doesn’t quite have the buzz. The Bible says it’s wrong to lie, so which would you prefer?

Oh my. Can I have both please?

In April the NIH launched a public private partnership to fund research and development treatments for COVID-19 and included some European agencies. Why did you feel the need to do that?

It was clear that we needed to pull all of the resources, all of the talents, all of the organizations together and work in a coherent way and not go after COVID-19 with a whole bunch of scattershot projects. And the only way to really do that in my experience is you get everybody around the same table. That means bringing together industry, 18 companies now, the National Institutes of Health, the largest supporter of medical research with public funding, the CDC, the FDA, the Europeans, and saying ‘OK everybody, let’s not do this in an uncoordinated way, let’s figure out what are the most critical things that need to happen and let’s do them together.’ And that’s what we are now doing. I’ve never seen it happen quite like this, with such a broad endorsement of that kind of collaborative effort. And I’ve certainly never seen it happen this fast.

It sounds like the World Health Organization (WHO). Do you have concerns about WHO and its ability to bring together people in that way?

WHO has a tough job. They can’t generally draw conclusions or move in a direction until they get sign-off from more than 100 countries. And they have to take that very seriously as part of their mandate. They are our partners in many ways and have been for many decades.

Are you a supporter of the moves to distance America from WHO and to withdraw funding?

Illnesses don’t care too much about country boundaries. I don’t think it’s a good idea when it comes to health issues for us to consider that we can really handle those effectively just by looking at our own nation. We could be not just the soldiers to the world, which we have been over history, but also the doctors.

You’re Anthony Fauci’s boss. What do you say to him?

Tony and I talk some time between 8:00 and 10:00 o’clock every night. It’s a wonderful partnership. I have joined him as part of the White House task force [on COVID-19], so he has another ally in the room when those discussions are happening about what’s the right thing to do and is it too soon to open up and what do we really know about the effectiveness or this or that treatment. It’ll be nice to be there with him.

Why did you feel the need to join him?

I was invited, it made me feel that the White House is interested in getting even additional scientific input. I see that the task force is shifting its emphasis now even more in the direction of the scientific arguments about what we need to do next and particularly about treatments and vaccines and how can we speed that up. I’m right in the middle of that, so it makes more sense now.

What has surprised you most about this pandemic?

I was unprepared for a virus that could infect people without any symptoms and have them be highly infectious. That’s new.

Has this made you rethink whether or not the US would benefit from a system of healthcare that has more universal basic health coverage?

There’s no question that COVID-19 has shone a bright light on the very serious issue about health disparities in the United States. Look at the State of Georgia where 30% of its citizens are African American, but 80% of the people in the hospital with COVID-19 are African American. We’ve kind of known that; NIH has been deeply engaged in trying to come up with ways to change that. But most of the public hasn’t really paid that much attention to the fact that our healthcare system has so many inequities built into it. You can’t look at this now without seeing those. And it does make you wish for a better system.

Are you a supporter of some form of universal public healthcare?

I think healthcare ought to be a right and not a privilege. To the extent that that is not true in the United States, we’ve got work to do. Our current systems have not achieved that kind of principle. And we’ve got to keep trying.

I got up this morning at 3:30, because I had so may things I needed to get ready before the day kicked in. Everything matters. I’ve never felt the same sense of urgency in 27 years at NIH than I do right now. One feels that even one little mistake could cost a day, might have a real consequence in a few more months in terms of somebody’s life. We have to press on with every kind of energy, collaborative potential, and intelligence and creativity that we can, and not make mistakes. But we also have to take risks. So put that all together, that’s why I’m getting up at 3:30.

Faith, as you say, does not involve proof, but there’s certainly plenty of rational arguments to support the belief in a creator god. That’s where I found myself at age 27 when I was trying to prove my atheism and discovered that atheism is probably the least rational of all the choices, because it takes the position of asserting a universal negative, which scientists in general are discouraged from doing. 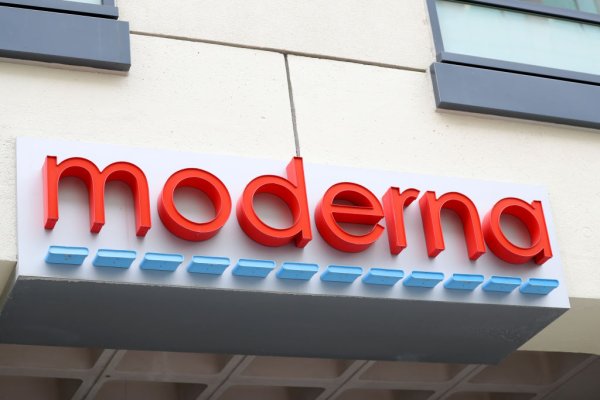 Moderna's COVID-19 Vaccine to Go to Phase 3 Trials in July
Next Up: Editor's Pick