'We Cannot Police Our Way Out of a Pandemic.' Experts, Police Union Say NYPD Should Not Be Enforcing Social Distance Rules Amid COVID-19

An NYPD officer wearing a mask looks at the camera during a briefing in the Union Square subway station May 6, 2020 in New York City.
Alexi Rosenfeld—Getty Images
By Josiah Bates

The New York City police department (NYPD) is conducting an internal investigation into a May 2 incident in the East Village involving the violent arrests of multiple individuals, allegedly members of a group of people who were not social distancing. Video footage of the arrests has been widely circulated, leading to criticism of what has been viewed as both excessive and inconsistent enforcement of public health mandates amid the coronavirus pandemic.

According to an NYPD statement sent to TIME, police observed a group “in violation of social distancing orders.” When told to disperse, some members of the group allegedly refused to do so. (Attempts to reach the arrested individuals were unsuccessful; it’s believed they are still in custody.)

The incident is far from a one-off: In Brownsville Brooklyn, a video posted on Twitter on May 3 showed police aggressively engaging with groups of people as observers watch. In East New York on May 3, three NYPD officers were filmed engaged in a violent arrest, allegedly as a result of a social distancing infraction. And on May 6, footage showed police punching two men filming another social distancing arrest.

The NYPD did not respond to TIME’s request for comment on these three videos, or if additional investigations would be opened.

Last week, footage of two incidents in which police dispersed members of the Hasidic community congregating for funerals also led to criticism.

“These encounters have unnecessarily escalated between the police and members of the public, especially when they are aggressively enforcing [social distancing] in neighborhoods which are traditionally over-policed to begin with,” Jennvine Wong, a Cop Accountability Project Attorney at the Legal Aid Society, tells TIME. “This stands in stark contrast to the pictures and social media posts the NYPD has put out where they are in other neighborhoods handing out masks.”

Despite a downturn in COVID-19 cases in recent days, New York City remains an epicenter for coronavirus outbreaks in the U.S. with 327,469 confirmed cases and 25,623 deaths. The city’s police force has been drafted to help enforce social distancing and stay-at-home orders that were implemented by Gov. Andrew Cuomo in March; as summer weather gets warmer and more people start going outside, community organizers and leaders including NYC’s Public Advocate Jumaane Williams fear these kinds of incidents will become more commonplace.

“The NYPD’s track record with policing leads me to believe there will be more aggressive enforcement in these neighborhoods,” Wong says. “We cannot police our way out of a pandemic.”

Read more: As New COVID-19 Cases Decline in New York, the Rest of the Nation Is Going the Opposite Direction

“We need to move away from using the police and the law enforcement system to respond to social and health problems,” Gangi says. He points instead to public health professionals and experts as a preferred source of guidance and interventions.

The NYPD’s main union, the Police Benevolent Association of New York City (NYC PBA), has also called for an end to the NYPD’s oversight of social distancing, describing the situation as “untenable.”

“The cowards who run this city have given us nothing but vague guidelines and mixed messages, leaving the cops on the street corners to fend for ourselves,” NYC PBA President Patrick J. Lynch said in a statement.

There is no conclusive data on how many arrests the NYPD has made in recent weeks tied to social distancing. The city sent out 1,000 officers on May 2 to make sure people were following health guidelines, according to The Associated Press. Across that weekend, officers issued 51 summons, most of which were for non-compliance. Three arrests were recorded, all related to the May 2 incident in the East Village.

General view of people walking along the Hudson River on May 3, 2020 in New York City.
Jose Perez—Bauer-Griffin/Getty Images

Wong says, however, that information the NYPD is releasing is not reliable because it’s “self-reported,” and doesn’t include demographic or geographic data. “It’s been hard for us to track how many arrests are actually arising out of social distancing enforcement,” Wong says, referring to charges that may have escalated from a stop that began on those grounds.

Monitoring of arraignments undertaken by the Legal Aid Society illustrates that arrests for low-level offenses like petty drug possessions or larceny have not slowed, Wong says, “despite the fact that we are in the middle of a pandemic… What we’re seeing is that the NYPD is operating like it is business as usual even though every other business has modified their protocols.”

And Gangi says that officers often use physical force or intimidation while policing — when enforcing social distancing, such measures serve instead to compound the risk of viral transmission for all involved parties.

As the viral arrest videos illustrate, many officers are not social distancing themselves and incorrectly using their personal protective equipment. “You see officers out on patrol with no masks, no gloves or wearing their masks incorrectly,” Wong says. “They aren’t adhering to the [health and safety] guidelines themselves.”

Read more: Police Departments, Sheriffs’ Offices Across the U.S. Grapple With COVID-19’s Impact on Public Safety—and Their Own

Despite these concerns, Mayor de Blasio says that police will remain in their current roles, arguing their presence “causes people to correct their behavior.” The mayor’s office did not immediately respond to TIME’s request for comment.

“There’s been thousands and tens of thousands of interactions between police officers and civilians over the last weeks that went very well where the NYPD went and made sure that people were practicing social distancing when enforcement was necessary,” de Blasio said. 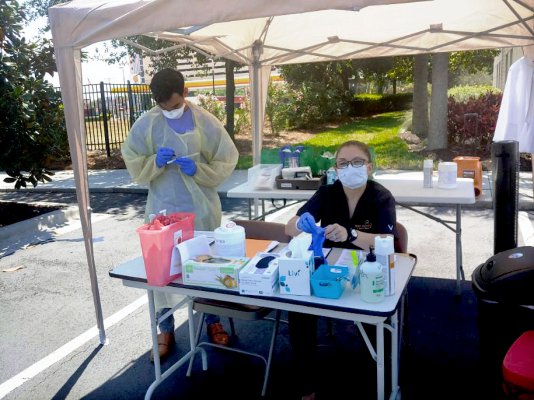 COVID-19 Testing Will be Required for Some Returning Workers
Next Up: Editor's Pick