After My Wife Died I Was Consumed by Both Grief and Paperwork. We Must Work Together to Change the Medical System

After finding a parking space I stopped and shifted my minivan into park. I sat still for a moment, a moment that allowed me to take a breath in relative silence. Silence, sitting in that driver’s seat, had a particular sound. It encroached after relays clicked and vent fans stopped. The engine crackled while cooling. Still hanging from the ignition, keys on the ring touched once or twice, singing their acknowledgement that their cohort completed the mission for this quest. I checked my back pocket to make sure the money was still there. Three crisp hundred dollar bills. It was the week before Christmas. My wife was still dead.

A half hour before my arrival at the parking lot, I was on the phone with a medical provider to whom I owed money. Was the remaining balance after the insurance payment negotiable? The voice on the other end—kind and patient—told me, yes, they would accept a discounted amount of $350 over the phone. If I paid in cash, it would be $300. So I got the cash and drove to their office. Grief is a shadow always with me, but I wasn’t there to deal with grief. I pocketed the grief and pulled out the money.

The flash of recognition on the face of the woman behind the desk told me she belonged to the voice on the phone. I handed her the cash. One of her associates asked, “How many kids do you have?” I said, “Two.” He sighed. The woman handed the cash to her associate, who took one of the bills and handed it back to me. “Buy something for the kids,” he said.

We don’t need to be mechanics to know when our cars won’t run, and we don’t need doctorates to recognize symptoms of our sick health care system. Today paramedics, EMTs, nurses, doctors, pharmacists, nurse practitioners and others are working around the clock to save people’s lives at the same time understaffed, overloaded hospitals are run as profit-making businesses instead of essential components of a social safety net. Health-insurance companies, by inserting themselves between providers and patients, have fractured the billing landscape and obscured costs. Their employees spend hours helping mourning customers navigate incorrect “billing codes” and understand their “explanation of benefits.”

I felt connected to the people who helped me. I felt betrayed by the system.

At one point Rachel was transferred between two partner hospitals, both in-network with our insurance, by helicopter. Weeks later, I received the first billing notice from the helicopter company. It didn’t list an amount. I called. The person on the other end was polite, empathetic and hesitant. At first they said something like, “It’s significant, but usually we can work things like this out.” After I pressed again, they revealed the balance: $69,999. Even though both hospitals were in-network, the helicopter company wasn’t. For months, I received notices, each of which had a pleasant little helicopter icon hovering above each step of the process: first over an “insurance denied” section. Later the “insurance denied” transformed into “insurance paid $8,000” and I found the little ‘copter hovering over a balance of $61,999. I called again—on Valentine’s Day, I realized while on the phone—after receiving a “final notice.” Another helpful, empathetic person assured me that I shouldn’t have gotten the notice. They were almost certain that the balance would be written off, since insurance had paid and Rachel was dead. I’m still waiting to find out.

I feel genuine gratitude for each polite interaction. But the scenarios were asinine. Bring cash for a discount? Seventy thousand dollars for a helicopter trip? That bill wasn’t even the largest. One bill for more than $200,000 was reduced to a tenth of that price after being reviewed by my insurance company. Just having insurance resulted in a 90% reduction in the invoiced amount before insurance paid a penny.

Occasionally I have small blocks of time between diaper changes, bath times, meal times and story times. In those fleeting minutes, my mind churns away at my family’s loss. Rachel shouldn’t be dead. Some things are wrong and they won’t ever be right. I try to find meaning outside of my loss. What can I do now? What can we do now? Rachel gathered people together. We’re relearning what a privilege gathering is. Perhaps, at least for a time, we’ll use this new wisdom wisely.

While the pandemic has been a stark reminder of how preposterous and cruel the system can be, it’s also shined a light on how heroic some of our fellow humans are. We are also learning what shared global grief looks like, and hard as it may be, we should use this moment to fix the broken systems that make heartbreaking situations even more unbearable. No one should risk bankruptcy for a trip to the E.R. We shouldn’t need crowdfunding to stay afloat in seas of hospital bills while trying to keep our families’ lives stable.

Massive systemic change is challenging because it spans multiple disciplines and political arenas. That’s why it requires people working together. I can’t singlehandedly place my preferred politicians in office. But we can vote for candidates with specific plans to solve problems. I can’t redirect the economy. But we can pressure companies and our government to use metrics of success beyond the bottom line. I can’t fix health care. But we can support broad social solutions to broad social problems. I hope we will rise to these challenges: We must separate criticisms of systems from antipathy toward individuals. We must view others through a lens of radical empathy. We must find meaning outside of our loss. 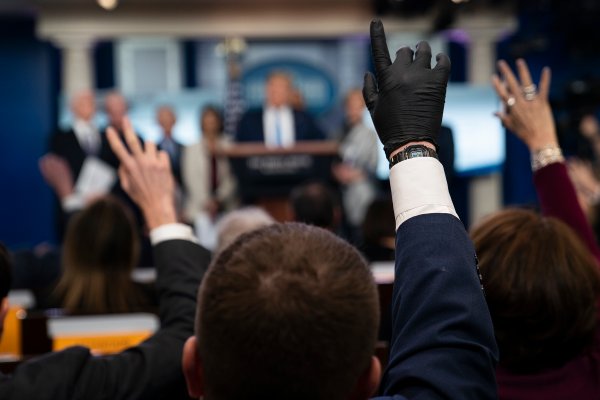 The COVID-19 Crisis Is a Failure of Democracy
Next Up: Editor's Pick