During a Friday press conference, NYC Mayor Bill de Blasio said that NYPD officers will no longer be handing out tickets or arresting people who are not wearing masks in public, or who are gathered in small groups.

“We’re going to focus on when it starts to be more than a handful of people, and we’re not going to be having the NYPD enforcing on face coverings,” Mayor de Blasio announced. “Hopefully that will clarify everyone’s relationship to each other and help us get the best result while also really protecting the progress we’ve made in the relationship between police and community.”

De Blasio said that officers will continue to break up large gatherings, but added that “if we never need to take any additional enforcement action other than the NYPD showing up and people leaving, that’s the ideal by far.”

His announcement comes after numerous reports of overtly-aggressive arrests involving people said to be ignoring social distancing measures. The most recent incident sparking outrage came on May 13, with a video gone viral social media showing a mother being arrested by officers policing the NYC subway for allegedly not wearing a mask properly. The woman’s small child was present throughout the arrest, which saw her wrestled to the floor as onlookers watched, some yelling “she had her mask on.”

Both police reform advocates and the NYPD’s union have called for officers to end the policing of public health measures outright. Representatives for these grounds criticized what they saw as ambiguity in de Blasio’s statement.

Patrick Lynch, the president of the Police Benevolent Association of New York City (NYC PBA) argued that de Blasio’s new rules would only create more issues. “The new policy should be a single sentence: police officers are not responsible for enforcing social distancing or other public health directives,” Lynch said in a statement.

And Robert Gangi, director of New York City-based advocacy organization Police Reform Organizing Project (PROP), labeled the decision a “modest step” for the department, but also continued to call for the police to stop enforcing altogether.

It’s clearly a response to the videos and the black eye that they’ve given the NYPD and de Blasio,” Gangi tells TIME. “The policy should be to remove the NYPD entirely from enforcing social distancing.” 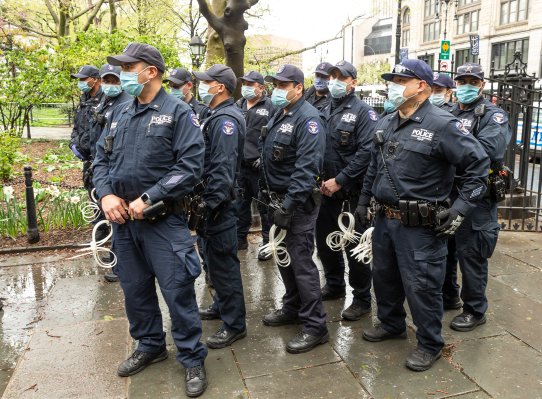