Why We Need the World Health Organization, Despite Its Flaws

World Health Organization (WHO) Director-General Tedros Adhanom Ghebreyesus gestures during a press briefing on evolution of new coronavirus epidemic on Jan. 29 in Geneva
Fabrice Coffrini—AFP/Getty Images
Ideas
By Ian Bremmer
Bremmer is a foreign affairs columnist and editor-at-large at TIME. He is the president of Eurasia Group, a political-risk consultancy, and GZERO Media, a company dedicated to providing intelligent and engaging coverage of international affairs. He teaches applied geopolitics at Columbia University’s School of International and Public Affairs and his most recent book is Us vs. Them: The Failure of Globalism.

COVID-19 has a way of making both individuals and governments feel vulnerable, and it’s only human to look for someone to blame when things go badly wrong. That’s why it sometimes seems as if willingness to absorb abuse is a natural part of the World Health Organization’s mandate.

The international agency has certainly come in for its share of criticism, and some of it is warranted. The WHO was slow to publicly recognize the scale of the threat posed by the outbreak in China. Though the organization declared the virus a global health emergency in January, Director-General Tedros Adhanom Ghebreyesus didn’t begin characterizing it as a pandemic until March 11, when the virus had already been confirmed in at least 114 countries. In part, that’s probably because, like most large bureaucracies, the WHO is a cautious institution.

It’s also fair to criticize the WHO’s relationship with Taiwan. China continues to condemn any recognition of Taiwan as an independent nation. Taiwan is unable to efficiently share information about its own outbreaks directly with the WHO because of China’s demands that Taiwan be denied formal representation within the U.N. system. Respecting China’s diplomatic sensitivities is one thing. Respect for the health of Taiwan’s nearly 24 million people is another.

The Trump Administration says that the WHO’s greatest failure is in accepting Chinese lies about containment of the virus in its earliest days. In January, Tedros praised “China’s commitment to transparency and to supporting other countries. In many ways, China is actually setting a new standard for outbreak response.” This despite credible charges that China hid the scale of the virus and punished Chinese doctors who publicly warned that risks were growing.

On April 14, citing the above mentioned criticisms of the WHO’s relationship with China, President Trump announced that Washington would temporarily suspend U.S. funding while his Administration reviewed the organization’s handling of COVID-19. That matters, because the U.S. is (by far) the largest single contributor to the WHO’s budget.

What lessons should we take from the COVID experience about the future of the WHO? If Washington has no use for a multinational institution composed of medical professionals who identify, map and track public-health emergencies that can kill millions of people, China might be happy to step in. China, which didn’t stop possibly infected citizens from traveling the world, could use its financial muscle to build a new global health agency, one that could benefit from China’s unique position in the global medical-supply chain to become first responders to health crises.

The U.S. is the biggest investor in the current WHO, but China is the dominant investor and trade partner in many of the countries most vulnerable to a pandemic. A Chinese version of the WHO would not allow the transparency that the world needs from such an organization.

Today’s WHO, like all multinational institutions working in politically sensitive areas, has big flaws. Like any U.N. agency, it can’t function without the goodwill of the governments it must rely upon for access. The WHO can be accused of not calling out China for its first critical response to this virus, but the organization could not study the virus from outside Wuhan. Call Beijing a liar, and the resulting eviction of WHO officials from China could kill millions.

Scrapping this organization would leave us racing to build a new one before the next crisis. 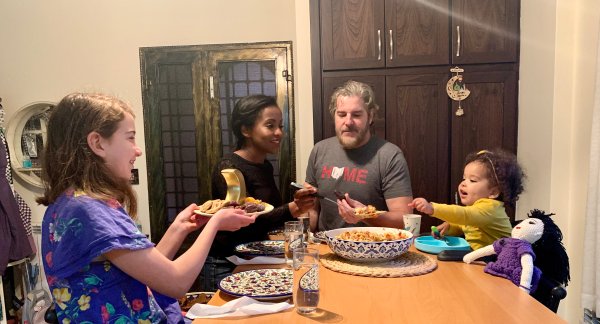 What It's Like to Celebrate Ramadan Under Lockdown
Next Up: Editor's Pick