How the Trump-China Rivalry Has Hampered U.S. Intelligence on COVID-19

In mid-November, U.S. military and intelligence analysts began to suspect that something might be wrong in the central Chinese city of Wuhan. The CIA was getting reports from the city that there was an outbreak of pneumonia. High resolution spy satellite photographs showed activity around medical centers and diminishing traffic in the streets. National Security Agency eavesdropping detected an increase in what appeared to be medical calls within the city, in the surrounding Hubei Province, and between Wuhan and government offices in Beijing.

For about a month, there was no way to assemble the scattered bits of intelligence into any confident assessment of what was happening, say four U.S. intelligence and defense officials, all of whom spoke on the condition of anonymity to discuss the raw reports. But as the activity increased and the reports from the city continued, some officials at the CIA and the National Center for Medical Intelligence began musing about whether something more serious than pneumonia or a seasonal flu might be spreading. Maybe something worse – something even more contagious.

More than five months and 225,000 deaths later, the U.S. intelligence community’s efforts to piece together the early spread of COVID-19 has been clouded by politics and self-interest in both China and the U.S., two of the countries that have suffered the most from the pandemic. Rather than doing all they could to share information to minimize the virus’ spread, both China and the U.S. have all too often focused on blaming the other for starting it.

Early in January, the Office of the Director of National Intelligence (ODNI) started including a warning in many of President Trump’s daily intelligence briefs, say two of the officials who helped compile it. The president, they say, was uninterested. So were Secretary of State Mike Pompeo, Defense Secretary Mark Esper, and other senior officials, the officials say, who routinely receive copies of the PDB and generally avoid confronting the president. What the intelligence officials and health experts could not tell the President— and still cannot today — is where the virus came from.

Politicians in Washington and Beijing have been quick to fill the vacuum. On Feb. 16, Arkansas Sen. Tom Cotton raised the possibility of an “engineered-bioweapon hypothesis with an accidental breach” in a tweet, along with the possibility of its deliberate release, calling that “very unlikely, but shouldn’t rule out till the evidence is in.” Similar conspiracy theories have been shared widely on social media, including by Patriots for Truth, a self-described patriotic organization that claimed on Jan. 28 there was “definitive proof the Coronavirus is a globalist bioweapon.”

China’s ambassador to the U.S. has called the theory “harmful and “dangerous,” and on March 13, Chinese Foreign Ministry spokesman Zhao Lijian escalated the conspiracy theory war with a series of tweets charging that the disease actually had first traveled to Wuhan with American soldiers who had participated in the October Military World Games there. That, too, took on a life of its own, the Army Times reported, powered in part by Russian and Chinese websites and social media.

The U.S.-China feud briefly subsided for a few weeks in late March and early April as both sides appeared to recognize the danger of escalation during a pandemic that was claiming thousands of lives. Trump stopped referring to the disease as the “China virus” and the “Wuhan virus.” High-ranking Chinese officials distanced themselves from Lijian’s accusation, and he eventually retreated.

But as the pandemic further accelerated and the economy sharply contracted in the U.S., Trump’s administration has returned to blaming China. During the last two months, he and other top officials have pressed intelligence and medical officials to press their investigations into whether the COVID-19 virus escaped from the Wuhan Institute of Virology, a laboratory in Wuhan where Chinese virologists study diseases carried by bats and other animals, according to U.S. officials. Reports of that pressure first appeared in the New York Times on Thursday.

Secretary of State Mike Pompeo has charged that by concealing what it knew about Covid-19’s origins, China poses a threat to the entire world. “The Chinese Communist Party now has a responsibility to tell the world how this pandemic got out of China, causing such global economic devastation,” Pompeo told Fox News on April 29. In an interview with NBC News the same day, Chinese Executive Vice Foreign Minister Le Yucheng blamed the U.S. for responding to the threat too slowly. “Some political figures are politicizing this COVID-19,” he said. “They’re using this virus to stigmatize China.”

U.S. intelligence officials have investigated anddismissed claims that the virus was “manmade or genetically modified,” according to an April 30 ODNI statement, and neither spies nor scientists have found sufficient evidence to support some U.S. officials’ public suggestions that the virus escaped from a Chinese government laboratory. Details of the intelligence community’s early investigations appeared first in the Washington Post and New York Times.

Intelligence officials say satellites, human sources, communications intercepts, and other tools have not detected unusual activity at or around the Wuhan Institute of Virology or the Wuhan Center for Disease Control and Prevention that would suggest a cleanup, a lockdown, an official investigation, or a purge. “The Chinese are adept at concealment, so we haven’t ruled anything out, but we don’t have an indictment, either,” said one of the officials.

It also may be impossible to prove that the virus did not escape from a lab in Wuhan. Even the most secure labs, called Biosafety Level 4, are not immune to leaks. In 2019, the U.S. Army Medical Research Institute at Ft. Detrick, Maryland stopped doing high-level research after the CDC found security lapses there, the Frederick News-Post reported after obtaining the CDC reports under a Freedom of Information Act request.

Two U.S. intelligence officials said the administration’s persistent efforts to pin the blame on a Chinese government lab remind them of the Bush Administration’s demands for intelligence that Iraq had weapons of mass destruction. “It was a mistake to bow to political pressure then, and it would be a mistake now,” said one of the officials.

The original version of this story incorrectly stated that Sen. Tom Cotton raised the possibility that the coronavirus was the result of a Chinese attempt to develop a bioweapon at a Jan. 23 Senate hearing, triggering conspiracy theories about the virus’ origins to be shared online. Cotton raised the possibility of an “engineered-bioweapon hypothesis with an accidental breach” in a Feb. 16 tweet and the possibility of its deliberate release, calling that “very unlikely, but shouldn’t rule out till the evidence is in.” The conspiracy theories shared online were not directly related to those comments. 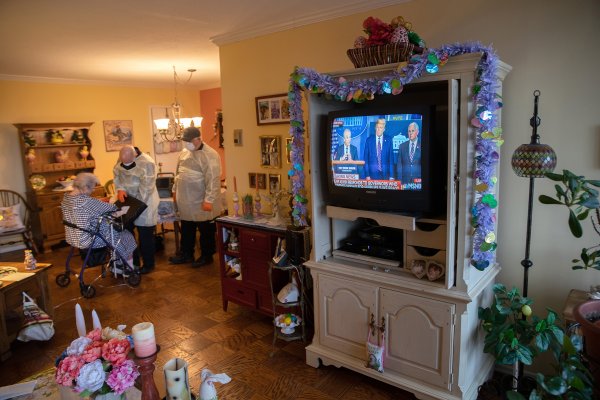 Lawmakers Want Care Givers to Get COVID Aid
Next Up: Editor's Pick