Here’s betting you wouldn’t want anyone blowing smallpox scabs up your nose. But you might feel differently if you lived in 15th century China.

Long ago, the Chinese recognized that people who had contracted smallpox once were immune to reinfection. They came up with the idea of preserving scabs from individuals who had suffered mild cases, drying them out, crushing them to a powder and blowing them up the nostril. For boys it was the right nostril, for girls it was the left because, well, 15th century.

Vaccination is much on the world’s collective mind today as researchers at pharmaceutical companies and universities race to develop a way to prevent the continued spread of COVID-19. The most optimistic projections suggest a vaccine could be in hand by January; other, more cautious predictions see a wait of at least 18 months.

But in the long arc of vaccine history, even 18 months is something close to light-speed. Whatever is eventually developed will owe its existence to centuries of incremental work that have turned vaccination from a crude and often risky practice to a highly refined science.

If the Chinese were first out of the gate in attempting to develop a vaccine against smallpox, it is 18th century British physician Edward Jenner who is credited with developing the first safe and reliable version.

Jenner, like others of his time, had noticed that milkmaids who as a result of their work had contracted cases of cowpox, a disease that could be transferred from cattle to humans, would typically be spared smallpox infection whenever there was a local outbreak. Cowpox was apparently dissimilar enough from smallpox to cause only comparatively mild symptoms in people but similar enough to confer immunity against the human form of the disease.

In a celebrated experiment in 1796—though it would hardly pass ethical muster today—Jenner harvested bits of a cowpox pustule from a milkmaid named Sarah Nelmes and scratched it into the arm of an 8-year-old boy named James Phipps, on May 14, 1796.

Dr. Edward Jenner (1749-1823) performing his first vaccination on James Phipps on May 14, 1796. Painting by E. Board in the Welcome Museum, London. Undated painting.
Bettmann Archive/Getty Images

After, he attempted to infect Phipps with human smallpox, but the boy simply shook off the virus. Two year later, Jenner published his results in a book that went by the less-than-reader-friendly title An inquiry into the causes and effects of the variolae vaccinae: a disease discovered in some of the western counties of England, particularly Gloucestershire, and known by the name of the cow pox. Still, the content—if not the marketing plan—was a sensation. By 1801, an estimated 100,000 people had been vaccinated using the same method.

To Weaken or to Kill?

But Jenner’s approach had its limits: not every human disease has an animal analog that can confer immunity without causing the disease itself. And some animal diseases that do jump to humans can be deadly to both species—like COVID-19 itself, which is thought to have come to us via bats. The trick then became to work with the viruses and bacteria that do cause human disease, but to disarm them somehow, to strip them of their power to sicken while still teaching the immune system to recognize and neutralize them in the event of an actual later infection.

Scientists realized that there was not just a single way to achieve that goal, there were two: They could kill the virus or bacterium while keeping its physical remains intact—effectively teaching the body to recognize a mannequin of the pathogen and mount an immune response if it ever saw a live one. In the alternative, they could attenuate—or weaken, but not kill—the bug, rendering it harmless but similarly teaching the immune system what to look for and kill the next time.

Over the course of the century and a half that followed Jenner’s work, multiple diseases were contained using one or both of these methods.

In 1881 and 1885, French biologist Louis Pasteur developed successful vaccines against anthrax and rabies respectively, exposing the pathogens to oxygen and heat and weakening but not killing them. In the early 20th century, French physician Albert Calmette and veterinarian Camille Guérin developed a tuberculosis vaccine, similarly weakening a bovine strain of the bacterium by passing 230 generations of it through artificial growth mediums, selecting for weaker and weaker versions with each passage.

Vaccines against measles, mumps and rubella were initially developed with attenuated viral strains, as well. In the case of rubella, the work was done partly by developing a strain of the virus that thrived at temperatures only below 37ºC (98.6ºF), making the human body an inhospitable place for it to be.

The problem with attenuated viruses is that mutations are possible—and in some rare cases the vaccine can cause the disease instead of preventing it. For this reason, 19th and 20th century researchers developed vaccines against cholera, pertussis, influenza and more by killing the pathogen entirely, either via heat or formalin, a diluted version of formaldehyde.

Jonas Salk’s breakthrough polio vaccine, approved in 1955, was based on formalin-killed poliovirus. Albert Sabin’s later, 1962 version used an attenuated strain. The advantage of Salk’s: it could never cause a case of vaccine-induced polio. The advantage of Sabin’s: it was an oral vaccine instead of an injectable one like Salk’s, making it possible for field workers—not trained medical personnel—to oversee mass immunization. (Despite the exceedingly rare cases of vaccine-derived polio, attenuated-virus vaccines present only a vanishingly small risk to health—smaller than the risk of going unvaccinated—though people with compromised immune systems, organ transplants or other underlying health problems should consult with their physicians before being vaccinated.)

In the late 1940s and beyond scientists got cleverer still, using just bits of the casings of viruses and bacteria to trigger an immune response—a bit like allowing a dog to sniff an article of clothing belonging to a missing person and then sending it on the hunt. Proteins extracted from pathogens could work similarly, each one carrying a chemical fingerprint that all by itself could teach the immune system to recognize and kill the wild virus or bacterium from which it originated.

More recently, as genomes became readily decodable, researchers have grown adept at developing vaccines that rely on extracting RNA or DNA from pathogens and injecting these into the body. There, the bits of genetic material cause cells to produce proteins that cannot cause disease but can sensitize and educate the immune system.

A mural depicting two figures of Saint Gennaro, patron of Naples, with a protective mask and an ampule with the label "The vaccine" written in Napolitan on a wall in the city's downtown, on May 11, 2020.
Salvatore Laporta—KONTROLAB/LightRocket via Getty Images

In the case of COVID-19, Moderna Pharmaceuticals in Cambridge, Mass., is making progress with just this kind of approach. There, researchers are working on a vaccine that uses the genetic material known as mRNA—which codes for proteins—extracted from SARS-Cov-2, the virus that causes COVID-19.

“mRNA is really like a software molecule in biology,” Moderna’s president, Dr. Stephen Hoge, told TIME’s Alice Park in late January, just as the pandemic was gaining momentum. “So our vaccine is like the software program to the body, which then goes and makes the [viral] proteins that can generate an immune response.” Other groups working on COVID-19 vaccines include CanSino Biologics, Inovio Pharmaceuticals, and a collaboration between Oxford University and AstraZeneca.

Whether Moderna’s vaccine or others ultimately bring COVID-19 to heel, humanity’s centuries of success in developing vaccines means that today few people doubt that a safe, effective inoculation can be found. And as novel viruses continue to emerge, the vaccine arsenal will inevitably grow.

Pathogens are mindless but relentless. But science is relentless too. Like any arms race, this one does involve loss of lives. But over time, as research progresses, many millions more are saved. 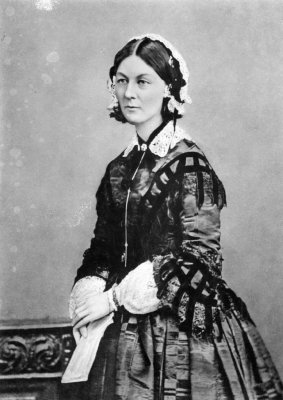 How Florence Nightingale Paved the Way for Nurses
Next Up: Editor's Pick