A plane flies in the sky over Washington D.C on April 21, 2020.
Liu Jie—Xinhua News Agency/Getty Images
By Justin Bachman and Mary Schlangenstein / Bloomberg

U.S. airlines are grappling with one outcome of the deep schedule cuts they’ve made in response to near-zero travel demand: Many of the flights that remain are starting to fill up, complicating social distancing guidelines and angering some passengers.

While carrier traffic is still down about 90% from typical levels, not everyone has stopped flying. More than 215,000 people traversed U.S. security checkpoints on May 8, the highest total since March 25, according to the Transportation Security Administration.

Read more: ‘We’re Definitely Spreading It.’ Flight Attendants Fear They Are Losing the Fight Against the Coronavirus

As air travel gradually returns in the pandemic era, airlines will face a fraught choice: Continue on board social-distancing by limiting cabin occupancy and increasing scheduled flights, or keep the number of trips in line with demand, which could lead to more crowded planes but also financially benefit cash-strapped carriers.

“There may be a mismatch of expectations—nobody promised a private jet,” said Samuel Engel, head of the aviation group at consultant ICF. “With all the pictures of empty planes, passengers might have gotten the impression that it was a guarantee. In practice, most planes are running with light loads, but that doesn’t mean every one is.”

Given the airlines’ swift slide from profitability into survival mode, expect to see many middle seats filled—barring regulatory mandates that they be left unoccupied. These days, an increasing number of passengers are complaining on social media about full cabins—and how close fellow travelers are sitting—even though most commercial aircraft are still flying with loads that are far below normal.

“Prepared with a face mask, & disinfectant, I expected minimal levels of people on board,” Amanda Koontz posted on Twitter May 8 about her American Airlines Group Inc. flight from Dallas to New York. “This is completely ridiculous and unsafe.”

“No #SocialDistancing,” a displeased Amy Groya tweeted after her United Airlines Holdings Inc. trip from Houston to Denver on May 7, en route to Montana. Groya said she intended to call United to object to the number of filled middle seats on her Airbus A320 flight.

American is leaving 50% of middle seats in economy unassigned through May 31, but said it will use those seats if necessary. Gate agents also can reassign seats to create more space between customers and accommodate families who want to sit together. Southwest Airlines Co. said it isn’t selling all the seats on its planes, either.

So far, it’s been fairly easy for airlines to keep most of their middle seats vacant with more than 3,000 aircraft (or 49% of the U.S. fleet) parked for lack of business, according to industry lobby Airlines for America. U.S. airlines’ load factors, or percentage of seats filled, averaged 22% through May 3, the group said.

Many flights remain far from full. On May 8, for example, only 6% of one U.S. airline’s flights had more than 80% of the seats filled, but 5% had single-digit load factors and 8% had 10 or fewer passengers. The carrier flew 1,965 flights that day, less than one third of its normal schedule. The airline requested anonymity to share the data, citing competitive reasons.

U.S. carriers have slashed their schedules by 90% or more in May given the absence of customers—with similar declines expected in June. So those who fly are being funneled onto fewer flights, leading to fuller planes. Greatly reduced fares and liberal flight rules that allow more passengers to book just before travel are also luring more people to the skies. On a May 3 American flight between Philadelphia and Fort Lauderdale, Florida, 93% of revenue passengers had purchased the cheapest economy fare, with the lowest one-way ticket only $17.

Lack of social distancing in flight could become a more pronounced issue throughout the summer. As many states and cities loosen restrictions that have kept people home, more passengers may start heading for the airport. But as medical experts warn of a coming second wave of infections across America—saying such “reopenings” are happening far too early given the nation’s lack of Covid-19 testing—the fear of flying may return.

For now, after six weeks of virtually empty airplanes, the industry appears to be emerging from the lowest depth of its coronavirus demand drought, albeit with schedules that are a mere skeleton of those planned before the virus struck in earnest in March.

Southwest said it will resume service to four international destinations on June 7. Spirit Airlines Inc. has restored some flying to its June schedule after “starting to see some signs of some traction,” Chief Financial Officer Scott Haralson told analysts May 7, though warning that any demand comes from a low base. Joanna Geraghty, the president of JetBlue Airways Corp., said the carrier had seen “very small improvements” in bookings.

Frontier Airlines said that load factors were above 50% on its flights last week, including 61% on May 8, while flying only 20% of its original schedule. The Denver-based carrier expects to average 51% on flights through May 14. 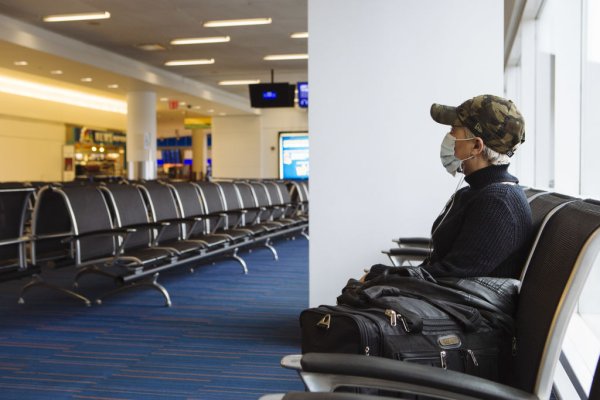 Major U.S. Airlines to Require Masks on Flights
Next Up: Editor's Pick