Ireland Prime Minister Leo Varadkar claps as he watches members of the Choctaw Tribe dance during his visit to the Choctaw Nation in Durant, Okla. on March 12, 2018.
Chris Landsberger—The Oklahoman/AP
By Mélissa Godin

A Native American community severely hit by COVID-19 has received an outpouring of donations from Irish people. As COVID-19 has swept through the Navajo Nation, with at least 2373 cases and 73 deaths as of May 3, Irish donors have have contributed to the Nation’s GoFundMe campaign — a return of a historic favor from 1847.

As a result, as that act of generosity has grabbed headlines across the globe, it has also drawn attention to a perhaps surprising moment from the past: During the Irish potato famine, the Choctaw Nation sent $170 ($5,000 today) of relief aid to the Irish people, despite facing hardship themselves. When the Navajo Nation GoFundMe campaign came to the attention of the Irish through social media, they decided to reciprocate the historic act of goodwill.

But why did the Choctaw Nation—which had little funds to begin with in the 19th century—help a country 4,298 miles away?

From 1845 to 1850, failed potato crops resulted in 25% of the Irish population fleeing the country and the death of at least 1 million people. Starving people across the country made historic marches to their landlords’ homes to beg for food, where they were ultimately turned away and many died on the journey home.

On the other side of the Atlantic, nearly two decades before the great potato famine, the Choctaw people had been forced off their ancestral land in Alabama, Mississippi and Florida by President Andrew Jackson and forced to make a 500 mile journey to Oklahoma, known as the Trail of Tears. More than half of the 21,000 Choctaw people who were forced off their land died on the trail due to malnutrition.

It is said that the Choctaw Nation heard about the famine from an Irish soldier overseeing the forced displacement of Native Americans — and, some experts believe, the Irish experience resonated with the Choctaw people. Like the Irish, Native Americans suffered under British colonial rule that resulted in hunger, genocide and disease outbreak. The British tried to put the Irish on reservations, as they did with Native Americans, and forced both groups to abandon their cultures and languages. So they decided to help, sending over funds that were used to purchase food, blankets and feed for livestock.

“There is a symbiosis of what it means to be a colonized people and to have lived through cultural trauma,” says Padraig Kirwan, a senior lecturer at Goldsmiths University and co-author (with LeAnne Howe) of the forthcoming book, Famine Pots: The Choctaw Irish Gift Exchange 1847-present. Kirwan says that the Choctaw gift was “a moment of empathy, of understanding what it means to have lost.”

The Choctaws’ act of goodwill was never forgotten by the Irish, and a close bond between the two groups has persisted historically.

Together, they have commemorated the loss and suffering both communities have lived through. In 1990, Choctaw officials traveled to Ireland to participate in a remembrance of those who died during the famine. Two years later, 22 Irish officials joined the Choctaw people as they marched the Trail of Tears to commemorate those that lost their lives.

The Irish and Native American people—for whom storytelling is woven into the fabric of their societies—have also kept the memory of their historical bond alive. In 1995, the Irish president at the time, Mary Robinson, visited the Choctaw Nation in Oklahoma, where she was made an honorary chief. In 2017, a sculpture of nine eagles feathers called Kindred Spirits was unveiled in Bailick Park in Midlton, County Cork, Ireland. The following year, Irish Prime Minister Leo Varadkar announced a scholarship program for Choctaw youth, calling the relationship between the two communities “a sacred bond…which has joined our peoples together for all time.”

Now, as COVID-19 spreads across the world, Native American and Irish people are supporting each other once again.

“What I find amazing about the GoFundMe page is that this concept of looking after each other—even in the darkest moments—remains still so important,” Kirwan says. “The fact that so much money has gone to the Navajo Nation underscores this.”

But the history of Irish and Native American solidarity is also more complicated: That shared experience didn’t always translate into sympathy. Some Irish people who immigrated to the United States participated in the oppression of Native Americans. “This often gets left out of the conversation,” says Kirwan. “It gets swept under the carpet.”

President Andrew Jackson, for instance, who called for the displacement of Native Americans from their ancestral land even after they fought for him, was the son of Irish immigrants. Patrick Edward Connor, an Irish-born Union general during the Civil War, planned the Bear River Massacre of 1863, where hundreds of Native American were killed. General Philip Sheridan, the son of Irish immigrants who led attacks against Native Americans across the Great Plains is credited with having said “the only good Indians I ever saw were dead,” though he later denied being the source of the phrase.

And yet when the Choctaw people heard about the famine from an Irish man overseeing their oppression, they still decided to help. Kirwan says this speaks to the Choctaw commitment to “ima,” which means “to give.” Now, 173 years later, the Irish are giving back, showing that the spirit of “ima” can go a long way. 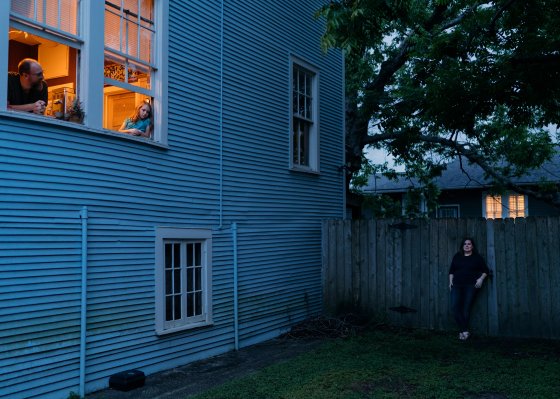 COVID-19 Is Making America's Loneliness Epidemic Even Worse
Next Up: Editor's Pick