Most U.S. Cities Can't Get Direct Coronavirus Budget Help. There’s a Way to Fix That

Small businesses that line the business district remain closed after the governor instituted a shelter-in-place order in an attempt to curtail the spread of COVID-19 in Rockton, Illinois, on March 24, 2020.
Scott Olson/Getty Images
By Philip Elliott

As Congress was getting ready to pass the latest round of coronavirus relief last month, Rep. Joe Neguse of Colorado noticed a problem for his district back home: nine of his 10 counties were too small to get any of the $150 billion set aside in the bill to help state and local governments. Governments representing less than 500,000 people were not eligible to access emergency aid to offset the costs that states, counties and cities have been racking up during the coronavirus crisis. When Neguse did the math, he calculated 85% of his district was shut-out of the fund, though the virus was not sparing his constituents simply because they lived in places that fell below the half-million-people mark.

Neguse’s district was not unique. In the end, out of the 3,262 counties and 39,044 local governments nationwide, only 171 qualify for direct emergency aid under the Treasury Department guidelines for the CARES Act that was signed into law on March 27. In eleven states with small populations — Alaska, Idaho, Iowa, Louisiana, Maine, Montana, North Dakota, New Hampshire, Vermont, West Virginia and Wyoming — every city and county was ineligible for the money. Even city governments in places like St. Louis, Miami and Cleveland didn’t qualify. States could still receive aid and distribute that cash to local governments at their own discretion — or not.

In all of these places, state and local governments are paying frontline workers like ambulance drivers, police officers and utility workers from quickly disappearing bankrolls. Taxpayer-supported food banks are seeing record demand as unemployment insurance is draining state reserves and sales tax revenue plummets under stay-at-home orders. In some places that can’t access the aid, COVID-19 is still on the rise and the strain on public resources will only grow. But even in places with low or decreasing caseloads, stay-at-home orders have tanked local economies, and governments are struggling to pay workers and maintain basic services.

As soon as the CARES Act passed, Neguse started to rally lawmakers from across the political spectrum to remedy this slight in the inevitable sequel to the historic stimulus package. Four weeks later, he has collected 147 co-sponsors — including five Republicans — spanning the ideological bridge from the progressive Alexandria Ocasio-Cortez to the far-right immigration hardliner Paul Gosar. Their proposal would set aside $250 billion in the next stimulus package to governments serving fewer than 500,000 people, doled out on a per-person basis. “Rather than trying to pick winners and losers, instead let’s just help every city in America that’s hurting,” says Neguse, a first-term Democrat who is the freshman Democrats’ representative during Leadership meetings.

But the fight over more help for the states and local governments is already facing headwinds. As the House is preparing to come back next week to work on what lawmakers are calling CARES 2.0, House Speaker Nancy Pelosi has already suggested as much as $1 trillion go to state- and local-government relief. But Senate Majority Leader Mitch McConnell, a Kentucky Republican, and President Donald Trump argue it’s not Washington’s job to bail-out states’ bad choices. McConnell has suggested states that can’t weather the crisis be permitted to declare bankruptcy and start over. In an interview on Monday, Trump said he does not support what he considers state “bailouts.” “It’s not fair to the Republicans, because all the states that need help, they’re run by Democrats in every case,” Trump told the New York Post.

The posturing may make for good drama in Washington, but it’s hurting places like Gilpin County, Colorado, population 6,243. Gilpin County, which is in Neguse’s district, is the hardest hit locale in the country by COVID-19’s economic fallout, according to a Wall Street Journal analysis of national data. Four in five Gilpin County workers are employed in the hospitality and gaming sectors, and 70% of the county’s budget comes from casinos that are now dark. “In Gilpin, there’s been only a few reported cases of the COVID-19 virus but they’re going to have the greatest economic loss of any county in America,” Neguse says.

It’s a problem that unites local leaders from both major parties in this purple state. Fort Collins’ Republican mayor and Boulder’s Democratic mayor are both managing similar challenges: a straining need for social services, furloughed workers, industries that may take two years to find their footing again and almost no tax revenue to give any breathing room.

Fort Collins Mayor Wade Troxell has already furloughed a quarter of his 2,400 city workers, delayed construction projects and put in place a hiring freeze. Even so, with 50% of his city budget coming from sales tax, he is bracing for further cuts. He has secured some help for the city through other parts of the CARES Act, including a $649,000 Housing and Urban Development grant, $11 million for public transportation and $17 million to keep the regional airport operational.

But Troxell anticipates coronavirus’ drag on Fort Collins’ economy could be anywhere from $25 to $53 million over the next two years without some help from Congress. “That revenue stabilization would really help us get through that period… That really sets up how municipalities come out of this on the other side,” says Troxell. “It’s happening in every community, not just large ones.”

About an hour south, Boulder Mayor Sam Weaver is facing the same problems. He’s already furloughed 135 members of his permanent workforce of 1,400 city workers, and the entire seasonal team of trail rangers and lifeguards. He’s predicting a $40 million loss over the next two years and is openly frustrated with Washington’s two-tiered relief system. Like Fort Collins, Boulder got money from HUD’s development grants. But that $485,000 is nowhere near what the city needs to dig out of this hole that seems to have no bottom, Weaver says. “Compared to the billions needed to recover from this, it’s a drop in the bucket,” he says. “We are the ones providing the immediate assistance… We currently have no federal support for what we’re working on.”

Intentionally or not, the way that the CARES Act allocated money to states and local governments automatically creates a division within states between residents in large urban centers and those living in suburban and rural areas. In Colorado, for instance, the Act provides the state a maximum allocation of about $2.2 billion based on population. Roughly one-in-five of those dollars automatically goes to the five biggest counties and Denver, the state’s only city large enough to qualify. Roughly 44% of the state’s population live in those hubs. Whether the state’s 59 other countries, home to 56% or so of Coloradans, get any of that aid is up the state to decide. In other words, if you live in a dense place, Washington made sure your local government got some help. If you don’t, it’s up to bureaucrats at the state capitol to decide whether or not to help your local city and county offices.

When Washington was writing the bill, some lawmakers argued that the communities with fewer than 500,000 people could access federal aid through the HUD grants that can be used by local governments for broadly defined community development projects. They did, but the limited funds didn’t match the need, some came with strings attached and all excluded communities smaller than 50,000 people.

That carries its own practical political risk: roughly two-thirds of Americans live in communities smaller than 50,000 people. In many of those places, people may be testing positive less frequently than their cousins in the bigger cities. But that might change as the virus spreads to more rural parts of the country, and having a local government staring down a mountain of red ink puts them at a years-long disadvantage many voters might think the government could have prevented.

It’s a political calculation that is almost certainly not lost on Neguse, who, if successful, would be a hero to every budget officer in rural America trying to decide whether to lay off the sheriff’s deputy or the sewage engineer. “We’re on the front-end of this crisis,” Neguse says. “The truth of the matter is, I fear what will happen down the road if we don’t address this now.” 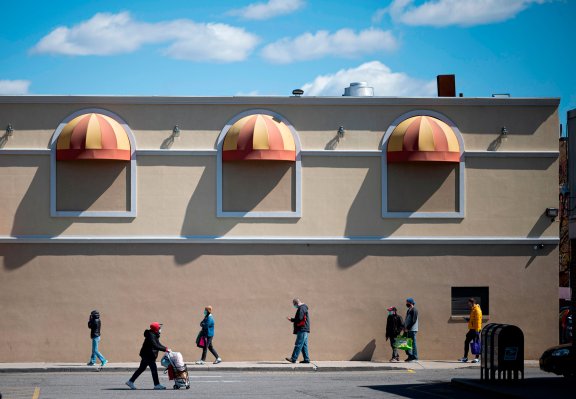