When it comes to headphones, especially truly wireless versions, it’s hard to top those made by a certain Cupertino-based company named after a popular fruit. But that doesn’t stop competitors from trying.

Google’s own attempt to recreate the magic that is the Apple AirPods is here, and it’s safe to say the reboot of the Android-friendly Pixel Buds is a pretty good one. The $179 truly wireless earbuds ditch the connecting wire found on the previous model, but maintain all the features that made the last version so appealing. While issues like fit and minor quirks — especially with the AI-powered Google Assistant — still exist, the end result is a pair of truly wireless buds with the same high-end build quality as the competition, and a welcome addition to the Android ecosystem.

If only they didn’t chafe so much.

Google’s long-awaited Pixel Buds, announced in October, are truly wireless, touch-friendly earbuds that come in a slick, if not bland, white wireless charging case. The case itself, which supports both USB-C and wireless charging (your vertical wireless charger won’t work, sorry), has a soft plastic finish and opens and shuts with minimal effort. Two LEDs, one on the exterior and one visible when opened, indicate the device’s charging status via two inscrutable colors. It’s the same approach taken with Apple’s AirPods — one that leaves me confused as to why the cut corners on something as vital as battery indicators. A few extra LEDs can’t be that hard to add for the sake of improved clarity, can they?

The in-ear buds themselves (available in multiple colors) have an appealing aesthetic, with a circular, plastic exterior. Both earbuds are touch-sensitive, meaning you can simply tap them to control playback. They’re pretty responsive, if not a tad finicky when it comes to volume controls, adjustable by swiping your fingers left or right on either earbud.

Compared to that of the entry-level AirPods, the Pixel Buds’ in-ear fit makes audio quality significantly more enjoyable, and gets rid of the tinny quality earbuds typically produce at higher volumes. Still, they’re lacking in bass compared to competitors like Master & Dynamic’s MW07 buds, and don’t have augmented audio features like the AirPods Pro’s “transparency mode,” which lets outside sounds reach your eardrums, even while the music continues to play. The closest equivalent are the Pixel Buds’ adaptive audio feature, which raises or lowers the volume depending on environmental noise. But songs sound great, and podcasts are crystal clear.

The inclusion of Google Assistant functionality is a no-brainer, but perks like real-time translation put it over the top, highlighting how Google’s efforts in other product categories (in this case machine learning) serve to improve features in its other products.

Then there’s the fit, an experience that is, for the most part, unique to everyone. For some, the Pixel Buds might sit perfectly in your ear (you can choose between large, medium, and small silicone ear tips), with its rubbery ear hook meant to keep the buds in place and prevent jostling.

But two hours in, during a particularly strenuous run, I felt pain creeping up on my ear canal. The Pixel Buds’ ear hooks started to chafe. A few blocks later, its silicone tips started to ache inside my ears. Swapping sizes alleviated a bit of the pain, but after wearing them for a few more hours the next day, I felt the familiar ache return.

Another annoyance? Using Google Assistant when you’ve got more than one Google product already catering to your every whim. When I’d ask my Pixel Buds for the weather forecast while sitting in my living room, my Google Home Mini would respond instead, blaring the forecast for all to hear when it was meant for my ears only. It’s a small gripe that grows into a larger one the more you buy into Google’s ecosystem and attempt to rely on its AI. In short, if Google knows I’ve got Pixel Buds in my ears, why is it piping answers anywhere else?

When it comes to the competition, there’s plenty, especially for Android devices. Apple’s got iOS on lock with its line of AirPods: Apple-made, truly wireless earbuds. Third-party headphones from companies like Master & Dynamic, Jabra, and Samsung are all options for both iOS and Android users, but Google’s Pixel Buds are designed to play particularly well with the company’s Google Assistant, supporting features like voice-activated assistant activation, real-time Google Translate capabilities, and the useful-in-a-pinch Find My Earbuds location app.

In short, Google’s Pixel Buds are a must have for the Android faithful, especially if you want earbuds that are both functional and aesthetically pleasing. Finally, Google’s got its own AirPods equivalent, one that actually ditches the cables and goes truly wireless. Sure, there’s no noise-cancelling or augmented audio capabilities, but the Pixel Buds certainly serve as an improvement over its predecessor, and a sign that Google isn’t letting its competitors have all the fun. 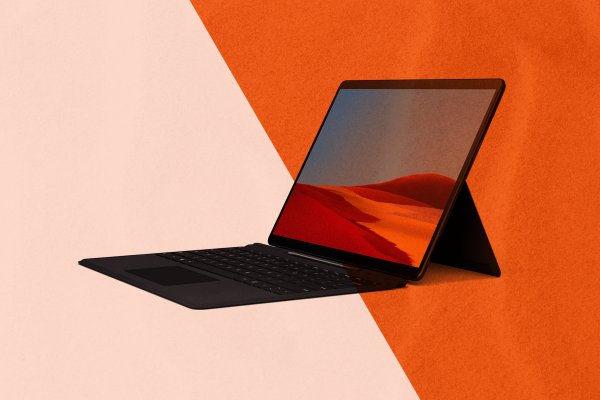 Microsoft's Surface Pro X Is Pretty But Not Ready for Primetime
Next Up: Editor's Pick