Who Discovered Soap? What to Know About the Origins of the Life-Saving Substance

A woman washes her hands on Feb. 26, 2020 in Berlin.
Photothek via Getty Images
By Cody Cassidy

Ever since the Dutch glassmaker Antoine Philips van Leeuwenhoek peered through his microscope in 1668 and saw a living organism in his lens, we have been slowly coming to terms with just how many bacteria inhabit our world. Bacteria are on the pillow we sleep on at night and on the cereal spoon we use in the morning. Biologists estimate a single human hand plays host to 150 different species at any given moment. Most are harmless, some are beneficial, and some are murderous if they could only find a way past the skin. In densely populated cities, where these dangerous bacteria and diseases can be passed from one to hundreds with a twist of a doorknob, it’s no exaggeration to say soap doesn’t just make cities healthier—it makes them possible.

Thanks to its antiquity we will likely never know exactly how many lives soap has saved, but even conservative estimates run into the hundreds of millions. And yet it could save far more. According to a report by UNICEF, if every cook used soap it would cut the world’s rate of respiratory infections by 25% and cut diarrheal diseases in half. That alone would save more than a million lives every year.

Soap is serially underestimated and underutilized because it suffers from a fundamental PR problem: it cleans away something you cannot see. That’s a difficult conceptual leap for even the most educated among us. According to the U.S. Centers for Disease Control and Protection, doctors wash their hands half as frequently as they should. Soap also saves the life of a healthy person oblivious to the bullet they dodged. So despite not only saving more lives than penicillin but enabling our modern urban existence, we still underrate what is perhaps the greatest medical discovery in human history.

I’ll call her Nini, after the Sumerian goddess of medicine Ninisina. And I’ll call her a “she” because soap’s discoverer likely worked in Sumeria’s burgeoning textile industry, which the anthropologist Joy McCorriston tells me was an industry dominated by women.

Nini was born 4,500 years ago in what is now southern Iraq, perhaps in the ancient Sumerian city of Girsu, where the oldest written tablet detailing the manufacture of soap originates. Nini was born around the time of the construction of the Great Pyramid of Giza, and other than being slightly shorter than the average person today was completely modern in appearance. Nini grew up in a bleakly patriarchal society according to the Mesopotamian scholar and author of Women in Ancient Mesopotamia, Karen Nemet‐Nejat. Her father was the head of her household and exercised authority over her until he died or she was married, which may have happened when she was a teenager, or sometimes even younger.

In a hymn, the goddess Eula describes a Sumerian woman’s life in simple terms:

Nini likely grew up lower class because in addition to being a housekeeper she had a far more modern role. The Mesopotamians, among their many gifts to humanity, invented the finger‐numbing drudgery of factory labor in textile mills. These large state‐run industries depended upon enslaved labor, debtors, and quasi‐employees to shear, sew, dye and produce woolen textiles, a critical export for many Mesopotamian cities.

By the time of Nini’s employ, Girsu’s textile factories were large‐scale production centers impressive even by modern standards. The archaeologist Daniel Potts calculates that in a three‐month period, 203,310 sheep were shorn in Girsu alone, a number made even more impressive since it was achieved before the invention of sheep shears. According to the Assyriologist Benjamin Studevent-Hickman, thanks to as many as ten thousand laborers a single textile factory in Ur produced more than four hundred tons of wool in a single year. Nini, it seems, was one of these workers.

The first documented use of soap is described on a cuneiform tablet found in Girsu. According to chemical archaeologist Martin Levy, the tablet was written 4,500 years ago and concerns the washing and dyeing of wool. To properly dye wool, a weaver must remove the lanolin fats from the textiles, which is accomplished far more easily with soap. Even today, weavers wash freshly sheared wool in soapy water to remove the lanolin.

Nini was far from the first person to take advantage of the chemical reaction between alkalis and fats—what chemists call saponification. The ingredients are common enough that most scholars suspect someone long before Nini first created the reaction accidentally, according to Seth Rasmussen, a professor of chemistry at North Dakota State University with whom I spoke. Alkalis are found in the ashes of burned wood and many scholars believe early humans used wet ash to clean greasy butchering tools. Unbeknownst to the cleaner, ash combined with the animal grease to create a simple, impure soap.

The fact that wet ash removed grease was probably understood by the first weavers as well, who likely used it to clean their textiles, according to Hugh Salzberg, author of From Caveman to Chemist. The ash would have combined with wool’s lanolin to create saponification.

Yet there’s reason to believe no one discovered one could make soap itself—which one could then wash one’s hands with—before 5,000 years ago, according to Rasmussen. Because there’s no mention of soap for the first millennia of Mesopotamian writing, most scholars believe soap was discovered in some proximity to its first mention in the tablets 4,500 years ago. “If it was known long before Sumerian times we would expect to see references to it in earlier Sumerian records, which we don’t,” Rasmussen tells me.

Nini’s stroke of genius was likely the moment she discovered the fatty lanolin or the animal grease was the reason ash worked so well as a cleaning agent, and could be added to ashy water to create a bucket of liquid soap. It may seem a small step, but it meant Nini no longer relied on the grease of whatever she was washing to aid in the reaction. Instead, she could create the ideal mix of fats and alkalis and wash anything—especially, and most critically, human hands.

Nini’s first soap, Salzberg theorizes, may simply have been a bucket of ashy, greasy water. Later, either Nini or someone else realized they could strain the ash and globules of fat away, as water absorbs the alkali from the ash in a process called “leaching.” Because few people would have been interested in washing themselves with ashy water, leaching was another important step in encouraging people to use soap for its most useful purpose. Eventually, and up through the Middle Ages, soap makers skipped the strainer and dipped sacks of ash into water like tea bags.

The first known recipe for soap calls for approximately one quart of oil and six quarts of potash (potassium leeched from wood ash). According to Rasmussen this would have combined to create an impure but useful liquid soap. Using this crude formula to produce her ashy, greasy water, Nini would have made the most lifesaving medical product ever developed by humankind.

Except she wouldn’t have known it. Because the lifesaving effect of soap is so difficult to observe, it’s unlikely Nini received much recognition or acknowledgment in her lifetime nor would she have had any idea what she had done.

Sumerians almost certainly didn’t wash their hands with soap for the same reason modern doctors often fail to—because their hands already look clean. For hundreds of years after its invention there’s no evidence anyone used soap to clean their bodies. Instead it was used on items like dishes or clothing that had obvious grease stains. The first proof that anyone used soap to clean their skin comes from a cuneiform tablet found in the Hittite capital of Boghazkoi and written nearly a thousand years after Nini.

All technologies, no matter how significant a breakthrough they represent, take time to spread throughout a population. Economists call this lag “technological diffusion,” and Nini’s discovery suffered a particularly elongated one. Global adoption of soap is, as we’ve seen, still under way. 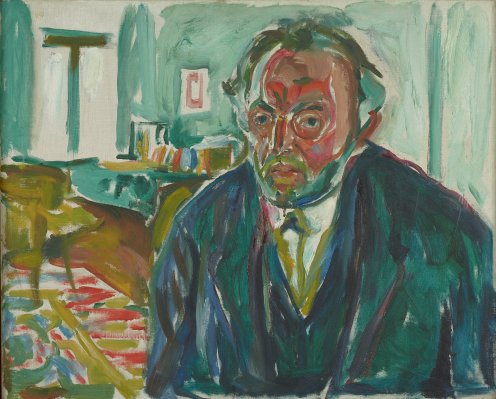 How Artists Tried to Make Sense of the 1918 Flu Pandemic
Next Up: Editor's Pick