Weeks ago, Director of the National Institute of Allergy and Infectious Disease Dr. Anthony Fauci says he would want “Brad Pitt, of course” to play him on Saturday Night Live. During the show’s second socially distanced episode, the nation’s top infectious diseases expert had his wish come true.

Pitt played what has become one of America’s favorite doctors in the episode’s cold open on Saturday and delivered a monologue with Fauci’s signature raspy voice, enthusiastic hand gestures and commitment to making sure the facts are clear. The task at hand: addressing misinformation about the coronavirus.

“There’s been a lot of misinformation out there about the virus and yes the President has taken some liberties with our guidelines. So tonight, I would like to explain what the President was trying to say,” Pitt said in the sketch.

Pitt expresses some reservations after a clip of Trump plays, in which the President promises that “anybody that needs a test gets a test” and that the “tests are beautiful.”

“I don’t know if I would describe the test as ‘beautiful,’ unless your idea of beauty is having a cotton swab tickle your brain,” Pitt said. “Also when he said everyone can get a test what he meant was almost no one.”

As the clip played, Pitt/Fauci was first open-mouthed and speechless before hiding behind his hands. “I know I shouldn’t be touching my face but—,” he said.

Pitt ends the sketch on a more earnest note, expressing his gratitude for Fauci, as well as medical worker and first responders.

“And to the real Dr. Fauci thank you for your calm and your clarity in this unnerving time and thank you to the medical workers, first responders and their families for being on the front line,” Pitt said. 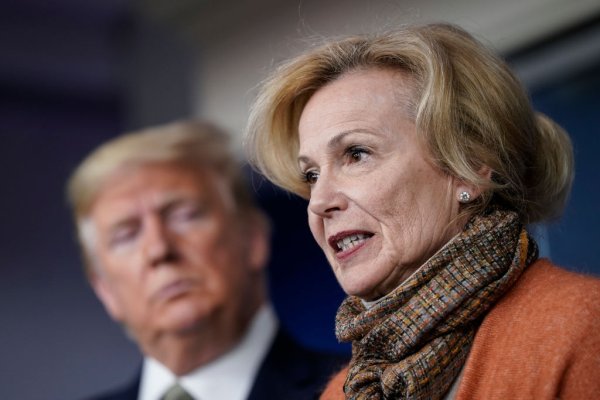