“It isn’t a homecoming until someone calls you a puta,” Emma Hernandez (Mishel Prada) deadpans to her younger sister Lyn (Melissa Barrera) in the series premiere of Starz’s excellent Vida. Their mother Vidalia has just died, following a diagnosis she never shared with them. Upon returning to Boyle Heights, the predominantly Latinx L.A. neighborhood where they grew up, to settle her affairs, they discover another secret: Vida had married a woman, Eddy (Ser Anzoategui). And now they’re expected to share the building she owned, which includes both a ground-floor bar and the apartment where Emma and Lyn were raised, with this stranger. Adding insult to injury is teen anti-gentrification activist Mari (Chelsea Rendon), the kid sister of Lyn’s high-school boyfriend, who accosts the grieving women on the street to call them “whitina” whores.

By the end of the half-hour episode, it’s clear why the Mexican-American Hernandez girls seldom visit home. While the stern, secretive Vida built a life that barely included them, beautiful Lyn moved to the Bay Area to live as a party-girl dilettante with a trustafarian white dude named Juniper. Emma—the angry, fiercely independent one—is a corporate ballbuster in Chicago. In three brief yet potent seasons, the last of which debuts on April 26, Vida sees them forced not only to carve out their own niche in this place that hasn’t exactly welcomed them home, but also to reconsider their relationships with each other and themselves. It’s the rare show about family, identity and community that captures the complexity of how we perceive ourselves and others.

Season 3 opens on a surprisingly peaceful note. (Vida doesn’t exactly rely on plot twists, but if you haven’t watched the first two seasons and want to avoid any spoilers, you might want to stop reading here.) The sisters have long since decided to leave their old lives behind, keep the building and save the bar; despite protests from Mari and her friends, it’s become a hotspot for young, hip Angelenos of color. Emma—whose lingering ire toward her late mother is rooted in Vida’s evidently hypocritical decision to send a pubescent Emma away to her grandmother’s after catching her in bed with a girl—is in the throes of a new romance with the kind, devastatingly cool mixologist-writer Nico (Roberta Colindrez, a brilliant second-season addition to the cast). Lyn’s new boyfriend Rudy (Adrian Gonzalez), a telenovela-handsome local politician from a prosperous family, seems to be her most promising match to date.

The tranquility can’t last, of course. Soon enough, the long-suffering Eddy—a working-class butch with a tender heart who’s mourning Vida more than anyone—surfaces with news about the sisters’ father, whom their mother had led them to believe was dead. Once allergic to both labels and commitment, Emma experiences a setback on her path to embracing her queerness when she learns Nico isn’t being entirely transparent with her. As impressive as he may look on paper, Rudy has mama’s-boy tendencies that start to turn toxic. Mari, for her part, is beginning to question the value of protesting the Hernandez sisters when there are so many more genuinely predatory forces targeting her community.

For many other TV dramas, these plot points would serve solely as obstacles scattered in the characters’ way to keep the show going for another season. But Vida has always been deliberate; if the first few episodes of the series lack the lived-in subtlety of what follows, it’s because creator Tanya Saracho (a theater artist who has written for HBO’s Looking and ABC’s How to Get Away With Murder) was so purposeful in fleshing out her characters and the world of Boyle Heights. With that scaffolding in place, Saracho has constructed storylines whose remarkable depth comes from viewers’ understanding of not just who these people are, but also how they see themselves and what they project onto one another. Mexican-American identity doesn’t mean the same thing to Lyn (whom the activists nickname “Coconut Barbie”) as it does to Mari—and for Mari’s best friend Yoli (Elizabeth De Razzo), a DACA recipient, it’s something very different. Emma and Nico and Eddy and Lyn’s pal Marcos (Tonatiuh), a gender non-conforming academic, each have their own way of being queer. Vida feels fueled by the awareness that people tend to judge or shut out others because they’re uneasy with their own identities and choices.

The same insights help to power its pleasures—of which there are many. Despite the show’s seriousness, and the grief that forms its emotional core, Saracho and her writers season each script with moments of beauty and bliss: the collective ecstasy of a warehouse party hitting its peak, the unforgettable taste of takeout from a favorite taqueria, the sparkling panorama of your home city as glimpsed from a familiar rooftop in the middle of the night. I can’t think of another series airing now that so freely depicts sex and sensuality without being exploitative or gratuitous; each of these scenes expresses more of what’s going on behind each character’s defense mechanisms than dialogue could ever reveal.

What I love about Vida—the reason that I hope people will keep discovering it even after its deeply satisfying series finale—is how close it comes, especially in its second and third seasons, to capturing the rhythms of real, embodied life. “Vida” isn’t just a nickname for Vidalia, after all. Like so many elements of this wise, empathetic, exhilarating show, the title, in its specificity, radiates a vitality that’s universal. 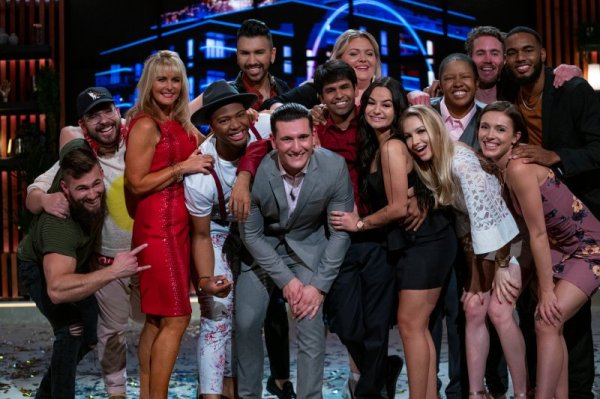 How People Built an Online Competition Inspired By Netflix's Reality Show The Circle
Next Up: Editor's Pick