With New York Governor Andrew Cuomo announcing an extension of the state’s shelter-in-place order through mid-May, New York City remains an epicenter of the novel coronavirus now spreading across the U.S. The city’s jail population continues to be a particularly vulnerable group, due to factors including inmates’ cramped living conditions and a lack of access to cleaning supplies.

According to the New York City Department of Corrections (DOC), 343 inmates have tested positive for COVID-19 along with 686 staff members as of April 16. Two inmates and five DOC employees have died.

The Legal Aid Society, a nonprofit organization in New York City, says the infection rate on New York City’s Rikers Island jail is 8.14% compared to 1.31% in the city and 1.04% in the state as of April 14.

On April 10, New York City Mayor Bill De Blasio’s office said that over 1,500 inmates had been released from city jails in response to the coronavirus, a move which they noted served as “a steeper population decline than in all of last year.” (De Blasio’s office did not respond to TIME’s request for figures updated as of April 17.)

On April 14, Governor Cuomo’s office announced that they will begin releasing elderly prisoners across the state who are close to their release dates.

In California, over 1,700 have been released from Los Angeles. Another 3,500 state prisoners are expected to be released, according to the California Department of Corrections and Rehabilitation. In New Jersey and Pennsylvania, hundreds of inmates have been released.

However, activists in NYC say that the city’s response to this issue has been too slow.

On April 17, the Legal Aid Society filed a lawsuit against Manhattan District Attorney Cyrus Vance, calling for the release of 76 incarcerated New Yorkers who are at high risk of catching the coronavirus. The organization claims that Vance has been unwilling to consent the release of vulnerable inmates.

The office of Queens District Attorney Melinda Katz — who has tested positive for coronavirus herself — had previously “refused to consent” to the release of Walter Ance, a prisoner at Rikers Island, the Legal Aid Society’s Tina Luongo said in an earlier statement. Ance “suffered from a litany of health issues, but despite these conditions and warnings… our continuing efforts were entirely ignored,” Luongo said. “As a result, Mr. Ance died handcuffed to a bed.”

To work around what they see as elected officials’ inaction, prison reform groups and individual campaigners are working to raise bail to free pre-trial inmates from jails and detention centers.

One such group is the Emergency Release Fund, a collective of volunteers which was founded in the summer of 2019 with the original goal of raising bail monies for transgender inmates. Since the spread of COVID-19 in New York, however, the fund has been working to free any — and as many — inmates as they can.

Read more: An Activist, a Warrior, a Mother to So Many.’ Lorena Borjas, Pillar of New York Trans Community, Dies From Coronavirus

“When [COVID-19] began to pick up in the city, public defenders started reaching out to us,” Alex Tereshonkova, an organizer with the group, tells TIME. “We’ve been getting non-stop calls from people asking for help.”

“Our goal is to just get people out,” Tereshonkova continues. “What [jail officials] are saying they’re doing is inconsistent with what we’re being told.” Tereshonkova says she’s been told that conditions inside city jails remain unsafe for inmates; she says she’s heard from lawyers that inmates are being told they are responsible for cleaning their own space without access to soap or other necessary supplies.

So far, the fund has raised over $475,000 dollars, and successfully posted bail for 80 people. (The Emergency Release Fund is also working with other non-profits to help those released find housing and transportation.)

Inmates at immigration detention centers run by U.S. Immigration and Customs Enforcement (ICE) are in a similarly vulnerable position.

ICE has reportedly released 20 percent of the immigration detainee population over the past month across three jails in New Jersey where most of the immigrants that ICE arrests in New York City end up, according to New York news site Gothamist. ICE’s website says that they’ve released nearly 700 individuals after “evaluating their immigration history, criminal record, potential threat to public safety, flight risk, and national security concerns.”

Wang says, however, that ICE’s processes have been taking too long, and that the agency is demanding too much money for bail. “Last week we paid $20,000 to get someone out,” Wang said. “This is just an agency that doesn’t care about human life.”

ICE did not respond to TIME’s request for comment on their bail criteria. According to the American Civil Liberties Union (ACLU) the majority of bonds for immigrant detainees fall between $5,00 and $10,000. 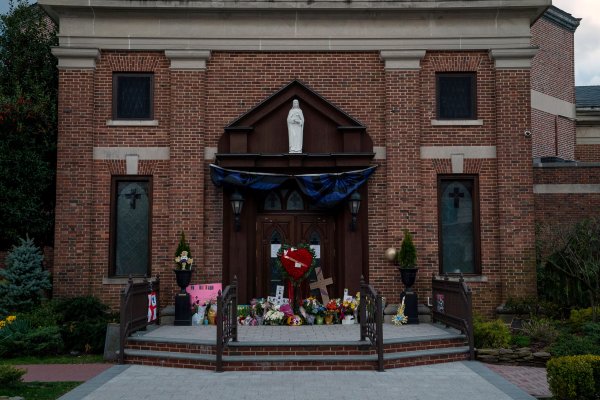 NYC Church Mourns as Priests Recover From COVID-19
Next Up: Editor's Pick