It Was Already Dangerous to Be Muslim in India. Then Came the Coronavirus

A man in a protective suit prepares to meet people who took part in a Muslim congregation hit by the coronavirus, on March 31, 2020 in New Delhi, India.
Ajay Aggarwal/Hindustan Times via Getty Images—2020 Hindustan Times
By Billy Perrigo

The Islamophobic hashtags began circulating shortly after the news broke in late March.

Indian authorities had linked dozens of cases of COVID-19 to a Muslim missionary group that held its annual conference in Delhi in early March, and health officials were racing to track down anyone who had contact with the participants. Coronavirus fears and religious tension were already at a fever pitch in India, and it didn’t take long for the two forces to intermingle. Videos falsely claiming to show members of the missionary group spitting on police and others quickly went viral on social media, exacerbating an already dangerous atmosphere for Muslims. “Islamophobia has been transposed onto the coronavirus issue,” says Amir Ali, an assistant professor of political science at Jawaharlal Nehru University in Delhi.

Since March 28, tweets with the hashtag #CoronaJihad have appeared nearly 300,000 times and potentially seen by 165 million people on Twitter, according to data shared with TIME by Equality Labs, a digital human rights group. Equality Labs activists say that many of the posts are in clear violation of Twitter’s rules on hate speech and coronavirus, but have yet to be taken down. “We are committed to protect and serve the public conversation as we navigate this unprecedented global public healthcare crisis,” reads a statement Twitter provided to TIME. “We continue to remain vigilant.”

Coming just weeks after religious pogroms conducted by Hindu nationalists left 36 Muslims dead in Delhi, the surge in hateful tweets demonstrates how anxieties over the coronavirus have merged with longstanding Islamophobia in India, at a time when the Muslim minority — 200 million people in a nation of 1.3 billion — feels increasingly targeted by the ruling Hindu nationalists. “One of the key features of anti-Muslim sentiment in India for quite a long time has been the idea that Muslims themselves are a kind of infection in the body politic,” says Arjun Appadurai, a professor of media, culture and communication at New York University who studies Indian politics. “So there’s a kind of affinity between this long-standing image and the new anxieties surrounding coronavirus.”

One of the most popular false #CoronaJihad tweets claims to show a Muslim man from the Delhi congregation intentionally coughing on somebody. The tweet referred to Muslims as “such vile minded people” and listed hashtags including #CoronaJihad and #TablighiJamatVirus, a reference to the religious group that met in Delhi. But the video featured in the viral tweet was actually filmed in Thailand, not India, and there is no proof that the man was a member of the Delhi congregation. Nevertheless, the tweet was still online as of April 3, with more than 4,200 retweets and 503 replies. Another video shared on both Facebook and Twitter purporting to show Muslims intentionally sneezing on each other was debunked by the fact-checking organization AltNews.

Another tweet, which had around 2,000 retweets before it was removed for violating Twitter’s rules, featured a cartoon of a caricatured Muslim man labeled “Corona Jihad” trying to push a Hindu off a cliff. “Corona jihad is this new idea that Muslims are weaponizing the coronavirus to target Hindus,” says Thenmozhi Soundarajan, executive director of Equality Labs. The tweet has since been removed for violating Twitter’s rules, but several other cartoons linking Muslims to the coronavirus, shared by the same account with more than 15,000 followers, were still online as of April 3.

In India, where the politically dominant Hindu nationalist Bharatiya Janata Party (BJP) has increasingly launched dogwhistle attacks on Muslims since being reelected with a massive majority in April last year, the coronavirus is just “one more opportunity to cast the Muslim as the other, as dangerous,” says Ali, the professor.

“People are talking about ‘bio jihad’ and ‘corona jihad,’” Ali says. “These are just the latest in a series of different forms of ‘jihad’ that the media has talked about, that have been spread on social media, and that people are gleefully accepting.” Population jihad, for example, is a common trope in Hindu nationalist messaging, claiming that Muslims are trying to turn India into a Muslim nation by reproducing at a faster rate than Hindus. Love jihad is the idea that Muslim men are tricking Hindu women into romantic relationships in order to convert them to Islam. “Corona jihad is the most outrageous one so far, because people are really being infected and dying,” Ali says.

Social media companies have struggled with hate speech for years, embroiling the platforms in a difficult tangle in which freedom of speech runs up against the companies’ responsibility to protect minorities. In the world’s first social media pandemic, hate speech related to the virus is spreading online almost as fast as the virus itself. But recent history demonstrates that inaction on the platforms’ part can allow hate speech to turn into violence. Myanmar’s 2017 genocide perpetrated by Buddhist nationalists against Rohingya Muslims was preceded by a campaign of dehumanizing hate speech on Facebook. Equality Labs’ Soundarajan says social media companies cannot feign ignorance on the issue because her group and others are flagging troublesome content. “They’re aware of it,” says Soundarajan. “Whether they allow it to go viral is now their own responsibility.” (Facebook did not immediately respond to a request for comment from TIME.)

Although this pandemic is uncharted territory when it comes to predicting the impact of virus-related hate speech, public health officials have warned against stigmatizing minority groups. Because COVID-19 originated in Wuhan, China, some — including the U.S. President — have called it the “China virus” or the “Wuhan virus,” a name that appears to be linked to an uptick in global violence against Asians. In February, the World Health Organization (WHO) announced the then-unnamed coronavirus would henceforth be known officially as COVID-19 — a name which purposely did not include a reference to China. “Having a name matters to prevent the use of other names that can be inaccurate or stigmatizing,” WHO Director-General Tedros Adhanom Ghebreyesus said at the time.

Some are working to prevent fears over the virus from becoming entangled with religious divisions. Sam Brownback, the U.S. ambassador-at-large for international religious freedom, is calling on governments to push back “aggressively” against the rising incidents of “blaming of religious minorities for the COVID virus,” including the rise in usage of #CoronaJihad and other hashtags trending in India. “The governments really should put this down, and say very clearly that this is not the source of the Coronavirus,” he said in a conference call with reporters on Thursday. “We know where this virus originated. We know it’s a pandemic the whole world is being subjected to. It’s not something from religious minorities. But unfortunately we are seeing that sort of blame game getting started up in different places around the world.”

In India, activists fear the stigmatization of Muslims could exacerbate the coronavirus crisis. “Launching a witch hunt against the attendees of the Nizamuddin congregation will be counterproductive from the public health point of view,” said several Indian intellectuals in an open letter published Thursday, referring to the area of Delhi where the conference was held. “The attendees should be identified without criminalizing them and put into quarantine as per norms.” The virus, they said, does not care about religious or national differences. “The solution will not come through the pursuit of divisive agendas but through scientific endeavors and human solidarity.”

A final irony of the Tablighi Jamaat controversy — which escalated on April 3 when the Indian government announced some members of the group would be charged under India’s National Security Act for violating quarantine — is that it was just one of myriad religious groups that continued to meet after India unexpectedly announced its coronavirus lockdown, yet it has drawn the vast majority of attention.

“They are no different from any other people in India and around the world who have pushed the envelope in terms of good sense,” Appadurai says of the Tablighi Jamaat congregation. “But of course, India is a very dangerous place for Muslims even apart from the coronavirus. It was asking for just the kind of thing that has now happened.”

— WITH REPORTING BY KIMBERLY DOZIER/WASHINGTON D.C. 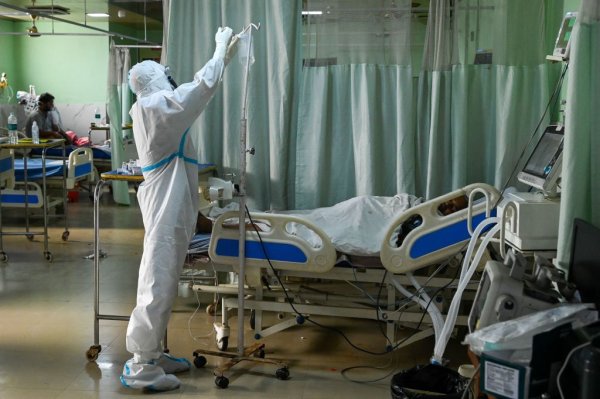